Editor's note: Each day this week one of ESPN.com's four college football writers will share memories from the best game he ever attended. On Friday, we will post a collection of the best memories submitted by SportsNation.

If you insist on being literal, then the 1994 Colorado-Michigan game may not qualify as anyone's best game. The No. 7 Buffaloes and No. 4 Wolverines played a nonconference game early in a season that ended without either team winning even a conference championship, much less a national championship.

Best game? Perhaps not. But for the sheer voltage that one athletic moment can deliver, you would be hard-pressed to find another in the last generation of college football. A lightning bolt struck Michigan Stadium, and while no one died, give or take the Wolverines career of head coach Gary Moeller (he resigned the following spring), the surge of electricity lit that memory for perpetuity. 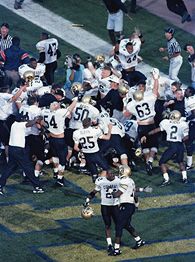 Think of it all: the magic of Colorado quarterback Kordell Stewart's 64-yard touchdown pass to Michael Westbrook after time expired, the call of ABC legend Keith Jackson as gravity did to Westbrook what Michigan defensive backs Ty Law and Chuck Winters could not and the quiet that draped over the sellout crowd as surely as if someone had sealed the rim of the Big House with a giant Tupperware lid.

The play concluded a dramatic homecoming for Westbrook, a Detroit native who had three dozen friends and family members in Michigan Stadium that day. Nine years earlier, Westbrook and Winters played on the same youth football team in Detroit. In a corner of the end zone they were reunited in perpetuity.

Colorado won, 27-26, having scored two touchdowns in the final 2:16. The Buffaloes won out of a formation called Jets, on a play called Rocket. Three receivers lined up wide left: Westbrook, Blake Anderson and Rae Carruth.

In the crowded visiting locker room after the game, the young Colorado quarterback and receivers coach explained the play. Months later, Rick Neuheisel would take over for the retiring Bill McCartney. On that day, he was still known better for taking UCLA to the Rose Bowl a decade or so before.

The Buffs practiced the play every Thursday. They had tried it on the last play of the half, and Winters intercepted the pass in the end zone.

At halftime, Neuheisel went over the fundamentals of the play with his players again. Westbrook, at 6-foot-4, was supposed to tip the ball. Instead, Anderson tipped it out of the hands of Winters, Westbrook caught it and the 1990s had their play of the decade with five seasons to go.

"You become a little kid," Neuheisel said in the locker room. "You become euphoric. You're, like, elevated. You're exploding. You look over there, and those guys are absolutely devastated and you're parading."

Reporters often leave the press box with five minutes left in the game in order to avoid fighting through the crowd to the locker room. You save in convenience what you surrender in vantage point. You file an early story and rewrite upon return.

I covered the game for Newsday -- from whence this reporting came. For some reason, both Vahe Gregorian of the St. Louis Post-Dispatch and I decided to stay in the press box. You know, just in case a miracle happened.

That's how we had the ideal view of a football miracle.

As we raced from the press box to the locker rooms all the way on the other side of the Big House, adrenaline fueling us upstream through the stunned crowd, here came Mark Blaudschun of the Boston Globe. The story he filed said that Michigan won. To this day, the look on Blau's face makes me think twice every time I leave a press box with a couple of minutes to go.