NORMAN, Okla. -- The weatherman cautioned Friday night and Saturday morning that the remnants of Hurricane Henriette would deliver more bad weather to an area that has had its fill of it this year. Flash flood warnings went up. Rain gear went on.

As it turned out, the remnants of Henriette never affected the Oklahoma game Saturday. The only remnants of a Hurricane that appeared at the stadium wore white jerseys and orange football pants. The remnants of the Miami teams that dominated football in the early part of this decade proved no match for No. 5 Oklahoma, which dominated them.

The Sooners, playing before the biggest crowd (85,357) in the history of Gaylord Family-Oklahoma Memorial Stadium, scored 30 unanswered points in the second half and pulled away to a 51-13 victory.

The Sooners never trailed, and if not for the 88 percent humidity, they never would have sweated. With an offense of multiple weapons and a defense that limited Miami to 139 total yards, Oklahoma (2-0) suggested that its ranking might be too low.

For the second consecutive week, redshirt freshman quarterback Sam Bradford played like a redshirt junior. Bradford completed 19 of 25 passes for 205 yards and five touchdowns, including scoring throws of 23, 24 and 30 yards to Malcolm Kelly. It was the one Bradford didn't throw to Kelly, a 9-yard dump-and-run to fullback Dane Zaslaw in the fourth quarter, that co-offensive coordinator Kevin Wilson loved.

"Here is a freshman that says, 'I'm not going to force it to my best receiver,'" Wilson said. "Our fullback was wide-open, and he [Bradford] makes the play. For a young kid, that's great to see. A lot of young guys would have locked on to that, 'I'm throwing it to my guy.'"

Bradford did sound young about a couple of things, such as when he said he liked to get hit. But he never flinched against a talented Miami defensive front. 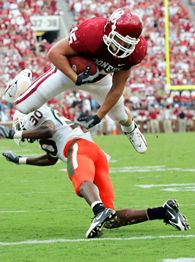 "I think with each day in practice, and definitely with each game, I feel a lot more comfortable out there with the guys and our system," Bradford said.

The return of Miami to this stadium revived painful memories for Sooners fans old enough to recall the 1980s, when -- for three consecutive years -- Miami defeated Oklahoma teams ranked in the top three. Asked about the hype in the area during the week, Oklahoma coach Bob Stoops said, "I got bored with it."

Otherwise, he enjoyed his team's performance, and for the second consecutive week. Oklahoma has outscored North Texas and Miami by a combined 130-23.

"I'm just real pleased that again, for us, we played like we feel we're capable of playing," Stoops added. "I guess we did. I don't know."

That's the thing about early-season games. The lines in the self-portrait a team draws are fuzzy. How good are we? How good are they?

No one will confuse Miami with the Hurricanes of yore. The portrait of Miami looked sharp, even if the team didn't. And the portrait looked familiar. Randy Shannon might be the new head coach, but this Miami team resembled the toothless 2006 team that lost five of six games to ranked opponents.

"When you have penalties like we had today," Shannon said, "and we don't communicate and don't do the things that coaches teach us to do, we won't be successful."

The Hurricanes' problems became most evident in the enclosed space of the red zone. Most teams have only a set number of plays in their goal-line offense. By halftime, Miami had emptied its playbook.

After a high punt snap from midfield by Oklahoma deep snapper Derek Shaw rolled all the way to the Sooners 8, Miami -- directed by starter Kirby Freeman -- gained 6 yards on four plays and settled for a 20-yard field goal to pull within 7-3.

Kyle Wright replaced Freeman in the second quarter with Miami trailing 21-3. Wright drove the offense like a Lexus from the Hurricanes 48 to the Sooners 15. Then the Hurricanes traded in the Lexus for a Yugo.

Miami snapped the ball eight times and made three first downs -- one on a fake field goal, two on pass interference calls in the end zone -- without scoring.

Five of those snaps came from the Sooners 1 or 2. On the fifth snap, Miami fumbled and lost 4 yards.

Only then did Wright throw a 6-yard scoring pass to Ryan Hill. The Canes got the points, and it trailed 21-10 at the half. But it took them 18 plays to go 52 yards. One team came off the field after that touchdown with momentum, but it wasn't the Hurricanes.

Knowing what's coming? It's not that the Sooners stole the Hurricanes' signals. It's that they knew from the formations and the players in them what to expect.

In the second half, Miami didn't have the predicament of what to call in the red zone. On the opening possession of the second half, the Hurricanes recovered Chris Brown's fumble at the Sooners 44 and moved as close as the Sooners 27, getting a 45-yard field goal from Francesco Zampogna.

After that, Miami got outside its own 30 for just one snap, on which it lost 5 yards. In fact, the Hurricanes failed to make another first down. The Sooners, meanwhile, reeled off four touchdowns and a field goal.

"This is what I hoped for," Stoops said. "This is how we expected to play."

By 6 p.m. Saturday, sunshine bathed the home of the Sooners. The remnants of the hurricane -- and the Hurricanes -- had long gone.