LINCOLN, Neb. -- Not content merely to defeat No. 14 Nebraska on Saturday night, No. 1 USC performed its own Salute to Troy. If the Trojans had been wearing throwback jerseys from the '60s, it would have been time to look for John McKay on the USC sideline.

The Trojans (2-0) rushed for 313 yards and five touchdowns in their 49-31 rout of the Cornhuskers (2-1) before 84,959 at Memorial Stadium. Rout is correct -- Nebraska skewed the final score by tacking on two touchdowns in the final 4:32 against the USC reserves.

This, boys and girls, is what McKay's teams did to opponents a generation ago. They opened holes big enough for bulldozers, then sent greyhounds through them. They introduced terms such as "Student Body Left" and "three-time national champions" into the college football lexicon.

Asked whether he had decided to bring Student Body Left back to USC, McKay -- no, wait, it was current head coach Pete Carroll -- smiled and said, "If we have to. Whatever it takes."

Playing the role of former Trojans great and College Football Hall of Famer Anthony Davis was sophomore Stafon Johnson, who finally looked worth the hype of his 2006 recruitment. Johnson rushed for 144 yards and a touchdown on only 11 carries. On a team with so many tailbacks that it listed five on the two-deep lineup card, Johnson established himself.

"I'm still a role player," Johnson insisted. "Whenever they call my name, I got to be ready at all times. I'm not really worried about who's the man. I really don't care as long as we get a victory." 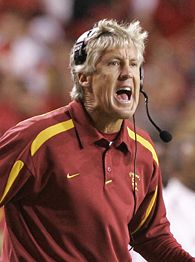 Quarterback John David Booty, who began the night as a Heisman Trophy candidate, needed to sew a name patch on his jersey by the time it ended. Booty didn't exceed the 100-yard mark in passing yards until 10:46 remained in the game. He finished 19-of-30 for 144 yards and a pair of touchdown passes.

No, this night belonged to 6-foot, 210-pound Johnson. He arrived from Dorsey High in Los Angeles a year ago proclaiming himself as The Prince of L.A., only to discover his status as royalty ended at the gates of Howard Jones Field.

"He just didn't have the right mentality to compete like the other guys did," Carroll said. "He thought what he was giving was great effort. He thought he was finishing well. He just wasn't a good player."

Johnson fell so far down the depth chart he had to look up to see the scout team. He gained 17 yards last season on all of three carries.

"It was the whole thing of just not working hard every day," Johnson said. "It was all a learning experience. Coming from high school where you're the man, and coming to college where you're the role player. If you want to play, you got to come in day in and day out and put your time in. It wasn't going that way."

On Saturday night, he surpassed his 2006 total on four separate carries. Johnson burst through an offensive line parting like a Broadway curtain, and once he got in the open field, any man looking for a quick buck wished he were supplying ankle braces to the Nebraska secondary.

Where did he come from? It's not as if he blew the coaching staff away in spring practice. Johnson underwent shoulder surgery in January and didn't practice until August. Carroll wanted to give him another chance to impress the coaches.

"The glimmer we saw [last season] gave us enough of a feeling that we brought him back to camp as a freshman, in a sense," Carroll said. "'Show us what you can do,' just like we do with the young guys that come in the program. That opportunity was all the difference in the world for this guy. He capitalized on it. He's run like that every single day. He's never not been like that. What you saw today is what we saw all camp long. It's a beautiful thing."

On the Huskers' first play from scrimmage, I-back Marlon Lucky rushed for 2 yards. Nebraska got to midfield and punted, pinning USC at its 4-yard line.

On the Trojans' first play from scrimmage, fullback Stanley Havili rushed for 50 yards, freeing himself with a left stiff arm that spun Huskers strong safety Larry Asante to the ground. 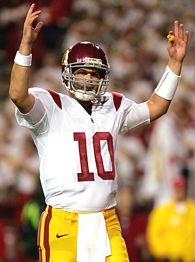 That basically told the story of the game. Lucky finished with 33 yards on 17 carries. The Nebraska offense became one-dimensional. Quarterback Sam Keller completed 36 of 54 passes for 389 yards and two touchdowns. However, after trailing 21-10 at halftime, Keller threw interceptions on the Huskers' first two possessions of the third quarter. USC converted both into touchdowns. Suspense concluded.

The video of Nebraska's first two games made the USC coaches believe the Huskers could run the ball. Offensive coordinator Steve Sarkisian scripted the first play for C.J. Gable.

Because the Trojans started so deep in their own territory, Sarkisian called Havili's play. Once Havili ran to the Nebraska 46, Sarkisian went to Gable. Running out of a one-back set, Gable came around right end, broke a tackle, spun through another one and gained 40 yards to the Huskers 6.

In the second quarter, play stopped for several minutes after USC corner Vince Joseph suffered a throat injury on a kickoff. After making sure Joseph would be all right -- he suffered a bruised larynx -- Carroll wandered over to the offensive linemen and told them the game would be on their shoulders.

A touchdown drive of 45 yards on five running plays followed.

"The holes were enormous," Carroll said. "They were ripping them off. It was great fun to watch those guys. It must have been a great thing to watch from upstairs to see all the open-field moves."