TAMPA, Fla. -- When the seconds ticked off, and No. 18 South Florida had upset No. 5 West Virginia, 21-13, the Bulls ran off their sideline toward the students, and the students hopped the end zone wall and ran toward the Bulls.

Pandemonium overtook the field at Raymond James Stadium, and the grizzled veteran inside you thinks, "It's September, for goodness' sake. Act like you've been there before."

And then you remember -- USF has never been here before.

In its 11th season of college football, in its seventh season of I-A football, and in its third season in the Big East, South Florida had never played before a sellout crowd at home. It had never established itself as one of the best teams in the nation. It had never reached the big time.

The Bulls did all of that Friday night. They didn't do it very prettily. But what the game lacked in artistry -- and if you missed the game on television, look at the box score and find the 10 turnovers -- it more than made up for in the passion that makes college football different from the game played in this stadium eight Sundays a year.

"I've said it from my first interview coming out of high school," senior linebacker Ben Moffitt said. "This is where I wanted to see the program go. This is what I wanted to accomplish in my time here." 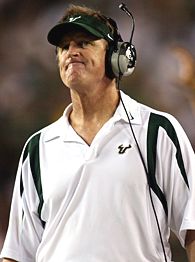 Head coach Jim Leavitt, who started this program, has gone 4-0 once before -- in 1998, when South Florida opened with victories over Slippery Rock, Valparaiso, Liberty and The Citadel. Only one of those crowds surpassed 22,000.

This season, USF already has beaten Auburn, North Carolina and, now, West Virginia. A sellout crowd of 67,018 watched the Bulls frustrate the Mountaineers.

"I really did think it would happen," Leavitt, still wearing a shirt drenched in sweat and Gatorade, said after the game. "I just didn't know when."

South Florida overcame more than West Virginia. The Bulls overcame themselves. The Bulls turned the ball over three times in the first 13 minutes of the game and four times overall. Sophomore quarterback Matt Grothe twice underthrew open receivers at the goal line in the middle of the field and got intercepted both times.

The statistics, cold and unfeeling as they are, are not flattering. West Virginia gained 437 yards of total offense, 163 more than the Bulls. West Virginia ran 86 plays to USF's 58.

But, oh, how the Bulls made plays. 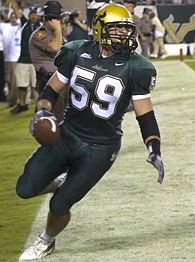 Moffitt intercepted two passes, one more than his total in 33 previous starts. The first one, dumped right into his belly when end Jarriett Buie grabbed White as he threw, Moffitt returned 26 yards for a touchdown. The second one, from White's backup, Jarrett Brown, snuffed a Mountaineers drive at the South Florida 36-yard line in the fourth quarter.

"This is the kind of competitor he is," Leavitt said. "He is thinking about the interception he dropped."
Moffitt is the embodiment of the blue-collar defense that veteran coordinator Wally Burnham praised after the game. Moffitt is a married father of two who commutes 55 miles each way to campus and, according to Burnham, hasn't been late for a practice or a conditioning session yet.

Moffitt doesn't act as if personal vanity is high on his list. But even he couldn't take the Mohawk hairdo that he and the rest of the defense gave themselves on Wednesday night. Moffitt went clean-shaven.

Grothe and a few of the offensive players went to Mohawks in solidarity on Thursday night. As much as Grothe struggled against the Mountaineers, one play in the second quarter showed why he has meant so much to South Florida since taking over the offense in the first half of his first collegiate game a year ago.

On third-and-8 at the Bulls' 45, Grothe tried to look downfield but the pocket collapsed. He got hit, and started to go down. The safeties, seeing the play fall apart, ran toward the line.

Big mistake. Grothe put a hand out, steadied himself, and sprinted to his right. Downfield, with no one within a first down of him, was freshman Carlton Mitchell. Grothe heaved a strike to him inside the 15-yard line, and Mitchell took it in for a touchdown and 14-0 lead.

When he got to the sideline and took his helmet off, Mitchell showed he had a Mohawk, too.
West Virginia made other mistakes, too. Bad snaps caused one of Slaton's fumbles and turned a third-and-goal at the USF 2 into fourth-and-goal at the 19.

"It's about as bad as you can play," West Virginia coach Rich Rodriguez said.

A year ago, the Big East took advantage of its prime-time national television windows to stage college football at its most crisply played. On Friday night, West Virginia and South Florida provided excitement, but not exactly execution. In the end, the excitement is what mattered. For another week at least, Jon Gruden remains The Other Coach in town.

The builders of the South Florida program hoped and believed that the day would come when they would sell out the home of the Tampa Bay Buccaneers. As Leavitt indicated, they didn't know when. Tampa and St. Petersburg, pro towns filled with college fans, embraced USF as they never have before.

The fans who came on this sultry autumn night came out of civic pride, yes, but also they came because they smelled success. Everyone, as the Yankees fans who outnumbered Devil Rays fans this week at Tropicana Field demonstrated, loves a winner.

For 60 minutes, anyway, the Bulls acted as if they have been there before.