We get inundated with numbers at ESPN. Stuff like: "Texas is 29-0 all-time in games in which it scores more than 60 points." Great. It's accurate, but it tells me absolutely nothing. Find me a team that doesn't win when it scores 60, and then you might be onto something.

And yet, in my job as a studio host, really good numbers are invaluable. After your analyst tells you, "Wisconsin has a lot of question marks at receiver this year," it's one thing to say, "They sure do -- lost a ton of catches off last year's team." But, to me, it's wholly another to follow it up with, "They sure do -- the players on Wisconsin's roster combined for four catches last year." Four! That's a number the viewer (or listener) can grasp. A number they can share with a friend. A number that tells them to keep an eye on whether someone emerges at receiver for the Badgers this year. It's even worse when you consider that they lost fully 25 percent of those catches to Marcus Randle El's knee injury last week -- so now they're down to three. That's a number that gives you perspective. And, that is a huge part of my job as a studio host -- adding perspective.

With that goal in mind, I spend an inordinate amount of time each week looking for those nuggets. I've got files, folders, sub-folders, databases -- frankly, it's a tad out of hand. But the net result is, there are some truly fascinating numbers out there. They now have a home -- this column.

Every Thursday, I'll compile the best stuff I've got for the week to come. I might add in a little observation or two about our travels on ESPN Radio's College GameDay, or some other interesting college football topic. But, the crux of the column will be the numbers. I hope you'll find a few interesting ones each week that you can hold onto -- a few that give you some perspective as you watch the weekend unfold.

As long as we're on the topic of Wisconsin, let's start it there: 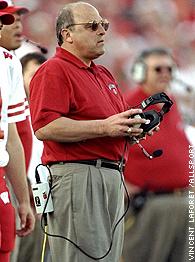 101: Wisconsin played 101 years of football before Barry Alvarez arrived in Madison. The Badgers played in three Rose Bowls, losing them all, and had one bowl win overall. In 16 years under Alvarez, they won eight bowls, including all three of their Rose Bowl appearances. Anyone who remembers Don Morton running the veer to the tune of six wins in three years (and emerging out of a coffin to declare that he "wasn't dead yet" in perhaps the single most painful coaches' show moment in college football history) understands what a brilliant job Alvarez did. This gives you a sense of just how huge the shoes Bret Bielema steps into are. But he's not the only new coach with a major task ahead of him

14: Northwestern won 14 Big Ten Conference games in the last three years under Randy Walker. That's one more Big Ten game than the Wildcats won in the 1980s. Walker led the school to three of its six all-time bowl games and three straight seasons of six or more wins -- a feat unmatched in Evanston since 1929-31. After Walker's tragic passing in June, 31-year-old former two-time National Defensive Player of the Year Pat Fitzgerald takes over at his alma mater.

136: Bill Snyder won 136 games in 17 seasons as Kansas State's head coach -- just one fewer than the number the Wildcats won in the 54 seasons before his arrival. Enter Ron Prince, who coaches his first game against Illinois State on Saturday (Snyder might be gone, but his cushy nonconference foes remain). The game will be played at Bill Snyder Family Stadium. It's a pretty good rule of thumb that when they name the stadium after you you did OK.

63rd, 57th, 64th, 59th: Speaking of Prince, the former Virginia offensive coordinator, those are the ranks of his Cavaliers offense last year out of 117 ranked teams in Division I-A in rushing offense, passing offense, total offense and scoring offense respectively -- basically redefines mediocre. Now you know why Prince has been called a "surprise" pick at K-State.

Even associate head coach Danny Rocco got himself a new gig, albeit a I-AA one at Liberty. If the Cavaliers continue their mediocre trend, particularly given their supposed recruiting triumphs, Al Groh might be the next to leave Charlottesville, though not of his own volition.

Golden's Temple team will participate in perhaps the ultimate futility bowl in its season opener Thursday, as the Owls face new coach Turner Gill and the Buffalo Bulls. Some frightening numbers here:

1-21: Combined record of the Owls and Bulls last season.

12: The two programs have won 12 games between them over the last four seasons, or one less than Texas won last season all by its lonesome.

10: Temple struggled a smidge with the halftime adjustments, though, scoring 10 third quarter points all season. Could go on forever with the numbers for this matchup, none of them good. The beauty is, someone's got to win.

3: While we're on the topic of futility, Louisiana-Lafayette threw three touchdown passes last season. Hawaii's Colt Brennan equaled or surpassed that total in an individual games seven times. In fairness, the Ragin' Cajuns did rush for 34 touchdowns -- only five I-A teams ran for more.

24: Illinois has totaled 24 sacks in the past two seasons. In that same time span, Louisville's Elvis Dumervil recorded 28 sacks.

17: The highest number of points scored in a game by Syracuse after the month of September. The two early games in which the Orange did manage more than 17 were against the aforementioned Virginia and Buffalo.

20: A doubly-significant number for Florida State as we get ready for the weekend's marquee matchup between the 'Noles and Miami. FSU gave up at least 20 points in its last nine games last year, by far the longest such single-season streak in school history. The previous mark was five in a row, which has happened three times, most recently in 2002.

12: The 'Canes' Kyle Wright threw 12 touchdown passes against Duke, Temple and Wake last year. Talented as he might be, he clearly padded his stats against the soft underbelly of Miami's schedule, as evidenced by

6: The number of touchdown passes Wright threw against everyone else.

But why dwell on the negative? Lots of impressive numbers heading into the '06 season.

5: Carroll's Trojans have won or shared four straight Pac-10 titles. No team has ever won five in a row.

1: The team USC lost to in the Rose Bowl, Texas, was held to under 40 points one time last year (in the win over Ohio State). The Horns averaged 50.15 ppg.

112: In its two losses to Texas last year, Colorado gave up 112 points. Aside from that, though, the much-maligned Colorado defense wasn't really that bad. The Buffs gave up only 195 points in their other 11 games combined. Add in Dan Hawkins' offensive genius, and Colorado might have the potential to surprise.

53.2: On the topic of explosive offenses, Louisville has averaged 53.2 ppg at home over the past two seasons. Could get ugly Sunday against a Kentucky team that was 107th in the nation in scoring defense last year. With its two toughest games, Miami and West Virginia, at Papa John's Stadium, it's understandable that Cardinals fans are dreaming of an undefeated season.

Dave Revsine is the host of College GameDay on ESPN Radio. Listen every Saturday from noon to 7 p.m. ET, as Gerry DiNardo, Todd McShay and Revsine break down the action.