Funny how the weeks that don't look so great on paper often turn out to be the best ones. One week after the excitement of Separation Saturday, last week had the makings of a real snoozer. (Somnolent Saturday anyone?)

And yet we ended up with a few of the year's most memorable games: Arkansas' OT win against Alabama, Georgia pulling out a squeaker against winless Colorado, NC State's stunner against BC and, of course, the thriller between Notre Dame and Michigan State. So, before we spin ahead to this week, as always, a few numerical thoughts from last Saturday's action.

The Michigan State collapse did take on a bit of a familiar feel, although MSU's heartbreakers generally come later in the year.

13-4: Despite the loss to the Irish, the Spartans are still an impressive 13-4 in August and September in their three-plus years under John L. Smith.

2-10: The Spartans are 2-10 under Smith in November and December. So, if you look at it another way, the Notre Dame loss was kind of a microcosm of the Spartans under Smith -- good early, bad late.

As for the Irish, there are still some major areas of concern. For instance:

644-299: Notre Dame has been outrushed 644-299 this season. For a team that many predicted would have one of the nation's best offenses, the Irish are a staggeringly bad 108th in the nation in rushing offense. 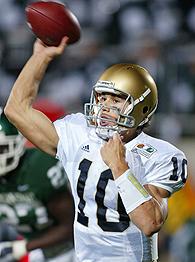 36: The Irish have committed 36 penalties this year. Only Baylor (38) has committed more. And yet, there's only one number that really matters

0: Notre Dame plays 0 Top 25 teams between now and the Thanksgiving weekend showdown with USC. Even if the Irish lose that one, it's a virtual metaphysical impossibility that a two-loss Irish team wouldn't play in a BCS bowl.

Which brought me back to a conversation Gerry DiNardo and I had on our College GameDay radio show a couple of weeks ago. I insisted that time of possession was a meaningless stat in college football, while Gerry, a former national championship offensive coordinator, insisted that I was insane. Seems we're both right, although my insanity is unrelated to my beliefs about time of possession. Here are the numbers:

DiNardo's rebuttal should be an interesting one. He's got two days to prepare and seven hours to harp on it. I shudder to think what might be coming my way. Pity the genial Todd McShay, who will undoubtedly be caught in the cross fire -- kind of the radio equivalent of Switzerland. Perhaps he'll serve as a voice of reason.

Among the teams in the top 10 in time of possession are those pesky Temple Owls. Their presence is explained, I suppose, by the fact that when it only takes opposing teams 40 seconds to score, you tend to get the ball back rather quickly.

Speaking of the Owls:

2: Temple's streak of consecutive shutout losses by 60 or more points ended at 2 last week, as the Owls lost to Western Michigan 41-7.

There were plenty of responses regarding last week's undertaking -- the attempt to find the last major college team to post consecutive 60-point shutout losses. Turns out no one could find a team that had suffered that ignominious distinction more recently than the one I found -- the 1939 University of Chicago Maroons. Their futility lives on.

But it seems one mark is clearly out of Temple's grasp this year:

Tex tells me that, after a tight 46-0 loss to the Kirksville Osteopaths in Week 2, things began to fall apart a bit for dear old KCU (sadly, no record of the nickname). KCU lost 109-0 the next week to Missouri Mines and then dropped a 114-0 decision to Ottawa. After a narrow 34-0 loss to St. Benedict, Kansas City, perhaps rocked by the internal dissension that so often comes out of a close defeat, saw the wheels come off a bit in a 131-0 loss to St. Mary's of Kansas. Surprisingly, there's no record of a bowl result.

114-7: On the bright side, Temple's offense did find the end zone for the first time all year on an 11-yard third-quarter run by Jason Harper. That's actually one more offensive TD than Utah State has scored this year. The Aggies have been outscored 114-7 with their only TD coming on an interception return against Wyoming.

312: Also among the teams still searching for that elusive first win -- Stanford. The Cardinal has given up 312 rushing yards per game, which is 51.7 yards more than Buffalo, which has the nation's second-worst run D. Stanford is on pace for the worst mark since Northwestern gave up 313.6 four years ago. Doesn't appear things will get better this week for the Cardinal, as Stanford faces UCLA and Chris Markey, the nation's eighth-leading rusher, on Saturday.

11: On the flip side of the 0-4 world sits Florida International. Don Strock's Golden Panthers have lost their four games by a total of 11 points.

As for the 4-0 teams, there are still 16 of them, but a couple had numerical reality checks this past weekend.

313: Georgia's defense is certainly impressive, but perhaps not as impressive as I built it up to be last week. The Dawgs gave up 313 yards to a Colorado team which hadn't gained more than 219 all year coming in and got 216 against Montana State. That's a Montana State team which, by the way, hasn't won since beating the Buffs -- losing last week to Eastern Washington, which lost earlier to Central Washington, which lost last week to Minnesota-Duluth, which, to be fair, did win the 2001 Mineral Water Bowl. Where was I? Reality checks 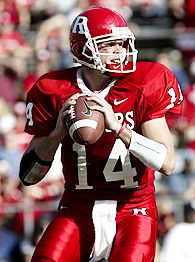 1: I love the Rutgers story and hope the Knights are for real, but the numbers tell us the jury may still be out. The four teams they've beaten have combined for 1 win against I-A opponents (Ohio U. beat Northern Illinois). And QB Mike Teel version 2006 (5 INTs in 76 attempts) is starting to look dangerously close to Mike Teel version 2005 (10 INTs in 101 attempts). This week the Scarlet Knights go to South Florida to face a Bulls team that beat them by two touchdowns last year in Jersey.

4-11: One of the Scarlet Knights' victims, North Carolina, has combined with fellow in-state programs Duke, East Carolina and NC State to go 4-11 this year. Those four wins equal the total of the state's other I-A team, Wake Forest.

4: The Demon Deacons stand alone as the one 4-0 team in the nation that has beaten 4 teams from the so-called BCS conferences. It's an even more remarkable story when you consider Wake lost its first ACC Player of the Year since 1979 in Chris Barclay off last year's team and has lost its quarterback (Ben Mauk), tailback (Micah Andrews) and left tackle (Arby Jones) to injuries this year.

11: Another 4-0 team, Virginia Tech, faces a Georgia Tech team with an impressive streak going. The Jackets have beaten a ranked team 11 straight seasons. If the current rankings hold, they'll have two more chances to extend that streak after Saturday, as they still have to face Clemson and Georgia.

6th: Is 4-0 Texas A&M for real? The biggest questions surround the pass defense, which ranks 6th nationally one year after ranking 117th, or dead last. We'll learn a lot more about that Aggies secondary on Saturday when they face pass-happy Mike Leach and Texas Tech.

212-93: Another "prove-it-to-me" defense in action this week is Oregon State. The Beavers had massive trouble with anyone who could throw the ball last year. They lost to Louisville, Arizona State, UCLA and Oregon by a combined score of 212-93 -- that's 53 points per game allowed. OSU was 115th nationally in pass defense. This year, the Beavers are fifth. We'll see how realistic that number is when they face Cal. 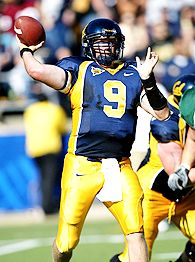 265: After a dreadful showing in the opener against Tennessee, Cal QB Nate Longshore has been terrific the last three games, averaging 265 passing yards, while throwing eight TDs and just two INTs.

74: It's tough not to believe in Michigan's run defense, which has given up a grand total of 74 rushing yards. That's 18.5 yards per game. On Saturday the Wolverines held Wisconsin to 12 net yards. Impressive, but, remember both Penn State and Iowa shut down the Badgers' vaunted run game last year, holding them to -11 and 19 yards respectively.

18: It's been a lot longer since anyone has slowed down this week's opponent, Minnesota. The Gophers have rushed for at least 100 yards in 18 straight games, dating back to a 2004 loss to Wisconsin, when the Badgers held them to 73.

84: Another interesting numerical matchup in the Big Ten this week is 31-year-old Pat Fitzgerald at Northwestern coaching against 79-year-old Joe Paterno. For a little perspective, consider that when Fitzgerald was born on Dec. 2, 1974, JoePa already had 84 career wins.

As for the marquee matchup, here are a few numbers to consider on No. 1 Ohio State at No. 13 Iowa:

33-7: Ohio State got thumped 33-7 when it played in Iowa City two years ago, the worst loss of the Jim Tressel era. Although, as Tressel pointed out to me in a conversation this week, his team is so young, particularly on defense, that few of his players actually played significant roles in that game. Still, you've got to think Tressel won't have trouble getting the Buckeyes motivated.

7 p.m.: If you've ever been to Kinnick Stadium, you know it's a madhouse no matter what time it is, but the Hawkeyes fans will be especially juiced up for the 7 p.m. CT kickoff. It's just the second true night game in Kinnick Stadium. The other, coincidentally, was also the last time a No. 1 team came to town, with Miami beating the Hawks 24-7 back in 1992.

Should be quite an atmosphere Saturday night. Todd, Gerry and I will be broadcasting from Iowa City starting at noon ET on Saturday, following all the games and setting up the showdown between the Buckeyes and Hawkeyes. Hope you'll join us then.