Game on. After seven weeks of college football, we finally have the two most important numbers of the season. As predicted by ESPN BCS guru Brad Edwards, who I'm convinced knows more about the system than I know about anything in the world, Ohio State ranked No. 1 and USC No. 2 in the initial BCS Standings.

Here's where it gets interesting. Michigan is third and Auburn is fourth. You know Auburn. The one-loss team coached by Tommy Tuberville, who is convinced the SEC just can't win in this current system. It's tough to predict what will happen behind them, particularly if the Tigers don't make the SEC championship game (certainly a distinct possibility), but it does set up some fascinating scenarios and debates. The most interesting possibility is that a one-loss team from one of the other power conferences would make the championship game over an unbeaten Big East team -- three of which are below Auburn in the standings.

Obviously, one of the three teams above Auburn -- Michigan or Ohio State -- will lose because they play one another. The tightness of that game will be a huge determining factor in how far the loser falls.

If you're rooting for the whole thing to implode, which it seems many fans do, it all hinges on USC. If the Trojans lose, we'll have either (1) a one-loss power conference versus undefeated Big East debate or (2) if all the unbeaten Big East teams ultimately lose one, a debate over which one-loss team from the automatic-bid conferences deserves it the most.

After watching USC scrape by three weeks in a row, and knowing that the Trojans still have to play Oregon, Cal and Notre Dame in successive weeks, I'm of the firm belief that USC will lose. The numbers clearly point out that the Trojans are nowhere near what they've been the last few years. For instance: 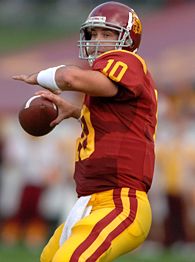 3: USC has won 27 Pac-10 games in a row, with the last three victories coming by seven points or less.

3: In the previous 24 games in their win streak, the Trojans had a grand total of three games decided by seven points or less.

Why the sudden rash of close games? Well, USC set the bar ridiculously high, and it's just not as overpowering as it has been the last few years.

1: The Trojans have one touchdown of 20 yards or more this season -- and it came on a fake field goal.

29: The Trojans had 29 offensive touchdown plays of 20 yards or longer last season.

So, there's clearly hope for the teams just below them, like, for instance, Tuberville's Tigers. But how is it that Auburn is just below USC in the first place? While I think Auburn is awfully good, the human polls that factor into the BCS continue to defy logic. Let's take the Harris Poll first:

10: One-loss Arkansas is ranked 10 spots behind one-loss Auburn in this week's Harris Poll.

17: Auburn lost by 17 points at home to Arkansas less than two weeks ago.

Clearly Denny Aldridge and his fellow Harris Poll voters have their fingers on the pulse of the college football world. I don't mean to pick on Denny. I don't even know who he is. He was just the second guy on the Harris Poll list alphabetically, and the first I had never heard of. Even a good 15-minute Google session couldn't really clear up Denny's identity, although I'm reasonably confident that he played at Texas in the late '60s.

So, there's that poll.

128: Speaking of Aldridge's Longhorns, as I so often find myself calling them, another polling note that caught my eye was that Texas has been ranked in the coaches' poll for 128 straight weeks, the longest current streak in the nation, and nearly 50 weeks longer than the next-longest current streak, of 79, held by Georgia. 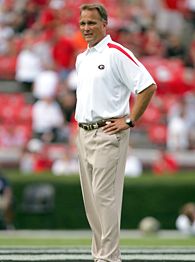 The natural reaction to this is not: "Wow, that's one long streak for Texas!" It's, "How in the world is Georgia still ranked?" The Bulldogs were obliterated by Tennessee, then lost to Vandy. They nearly lost to Colorado and Ole Miss before that. Have the coaches seen Georgia in, say, the last month?

And, of course, the answer is no. How could they have seen them? They have a little side gig coaching football, which is why most of them have someone else fill out their ballot in the first place. Seriously, why does this poll even exist? It's one of the greatest farces of all time. By the way, the gap in the coaches' poll between Auburn and Arkansas is 11 spots, in favor of the Tigers.

Just to clarify, I'm not saying pollsters always have to vote the team that won the head-to-head battle ahead of the loser. Particularly at the end of the year, I think you need to consider the entire body of work. But if two teams have identical records and one won convincingly on the other's home field eight days before you're filling out your ballot, I don't understand how you can rationalize ranking the loser ahead of the winner. It makes no sense, and it calls into question the credibility of all of these polls that play such a huge role in determining the BCS championship game matchup. Please, pollsters, pay attention to the games.

25: Much like USC's, Louisville's offense is starting to show some signs of mortality. Even with Brian Brohm back, the Cardinals were held under 25 points in their win over Cincinnati -- the second time that's happened in their last three wins. Louisville was held under 25 points just once -- a 21-12 win over Temple in 2003 -- in its prior 32 wins under Petrino before this recent slump.

228: As for the Michigan team that's No. 3 in the BCS, the Wolverines have given up just 228 net rushing yards all season. Four players have gained more than that in a single game this season, including Northern Illinois' Garrett Wolfe, who has surpassed the total twice. 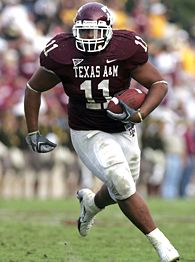 22: Wolfe, Texas A&M's Jorvorskie Lane and Clemson's James Davis are all tied for the national lead with 14 touchdowns. But 22 teams have crossed the goal line fewer than 14 times this season, including two that actually have winning records (TCU and Arkansas State).

66: Just behind Lane, Davis and Wolfe is Rutgers' Ray Rice, who's fourth in the nation in points per game, having scored 66 points on 11 TDs.

104th: As recently as two years ago, the Scarlet Knights were ranked 104th nationally in scoring defense and gave up more than that 50-point total in one game: a 54-21 defeat to Navy, the same team the Scarlet Knights shut out on Saturday. Granted, it's not like they're shutting down juggernauts. Of the five I-A teams Rutgers has beaten, only the Middies rank higher than 85th nationally in scoring. Still, it's an amazing turnaround.

2: Under first-year coach Bret Bielema, Wisconsin has given up a national-low two TD passes. Last season, the Badgers allowed 25 TD passes -- only seven other teams allowed more. In fact, Wisconsin allowed at least two TD passes in eight of its 13 games in 2005. 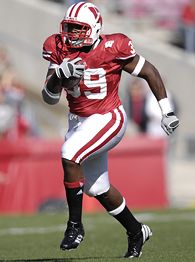 1915: In fact, you have to go back more than 90 years to find any single-season three-game stretch when Wisconsin has scored more. In 1915, Wisconsin piled up 195 points in its first three games, beating in-state foes Lawrence and Marquette by a combined 167-0 before topping Purdue 28-3.

The Big Ten's other rookie coach, Northwestern's Pat Fitzgerald, is having nowhere near that level of success, except for in recruiting, where his early haul of commitments is shaping up to be perhaps the best in school history.

While there may be hope for the future in Evanston, the present has been frustrating. Randy Walker's sudden death had a profound impact on the offensive juggernaut he created at Northwestern. Combine that with the departure of offensive coordinator Mike Dunbar, who left for Cal before Walker passed away, and the graduation of QB Brett Basanez, who finished his career second in Big Ten history in total offense behind only Drew Brees, and the Wildcats' decline has been nothing short of staggering.

285.4: Northwestern is averaging a Big Ten-worst 285.4 yards of offense. Not only did the Wildcats lead the conference in that category last year, but their average of 500.3 yards made them just the second team in Big Ten history to tally more than 500 per game. The only other crew to do it was Penn State's remarkable 12-0 team in 1994.

1: Northwestern has one TD pass this year. The Wildcats had 22 last year.

While the personnel loss would explain some of that, the Wildcats did return RB Tyrell Sutton, who earned national freshman of the year honors from several publications after rushing for 1,474 yards last year. Yet, how's this for a head-scratching stat:

115: Northwestern's three quarterbacks have combined for 115 carries and 4.1 yards per carry.

The Wildcats might turn out to be just the tonic struggling Michigan State coach John L. Smith needs this weekend.

14-21: Since getting out of the gate with a 7-1 record in 2003, things have really fallen apart for Smith at Michigan State. The Spartans are 14-21 in their last 35 games. That leaves Smith at one game under .500 for his MSU coaching career, which was exactly what Bobby Williams' mark was when he was dismissed in 2002.

$4.3 million: If MSU decided to fire Smith at the end of this season, it would reportedly cost the school $4.3 million to do so.

While they're certainly far from talking about buyouts at Stanford, it hasn't exactly been a banner season for second-year coach Walt Harris. The Cardinal are 0-7 with Arizona State, USC, Washington, Oregon State and Cal still on the schedule. Stanford's first winless season since going 0-10 in 1960 is certainly not out of the question. Two numbers are all you need to summarize how ugly it's gotten for the Cardinal.

52, 72: Stanford's offense, which lost QB Trent Edwards to a season-ending foot injury on the first series, gained just 52 yards in last week's 20-7 loss to Arizona. The Cardinal offense was actually outgained by its defense, which scored the team's lone TD on a 72-yard interception return by Wopamo Osaisai.

$1,500: Temple has shown up a lot in the futility items in this column this year, so it feels good to have something nice to write about the Owls this week. Before their game against Clemson Oct. 12, Temple's players voted unanimously to donate their per diem checks, $1,500 in all, to the Fahmarr McElrathbey Trust Fund.

Fahmarr is the younger brother of Clemson's Ray-Ray McElrathbey. As you may have heard, Ray-Ray took temporary custody of his 11-year-old brother this summer to get him out of the house of their mother, who is struggling with drug addiction. The NCAA has allowed Ray-Ray to accept donations to a fund for his brother's care. Classy move by Al Golden's kids to make the donation.

Speaking of Clemson, that's where Gerry DiNardo, Todd McShay and I will be setting up shop for "College GameDay" on ESPN Radio Saturday -- our first ever visit to the school. Can't wait to soak in the atmosphere for what's shaping up to be a huge showdown in the ACC as the Tigers battle Georgia Tech. Hope you'll make us part of your day starting at noon ET.