Eighty-one points. I still can't believe Ohio State and Michigan combined for 81 points. The 39 the Buckeyes gave up was 45 percent of the total they had allowed the previous 11 games -- and they won. Remarkable stuff.

A few more numerical reflections on the week that was before we plow ahead into Saturday's games.

56.8: Keeping with the percentage theme (which seems like the best way to comprehend it), Ohio State's total of 187 rushing yards was 56.8 percent of the 329 yards total that Michigan had allowed in 11 games coming in.

525: Looking at it another way, the Buckeyes' rushing total was 525 percent more than the 29.9 yards per game the Wolverines had been giving up on average.

52, 56; 2: The Buckeyes had touchdown runs of 52 and 56 yards. The longest touchdown run that Michigan had allowed all year coming in was 2 yards.

25: In fact, the Wolverines hadn't given up a run longer than 25 yards all season. The Buckeyes had three runs longer than that on Saturday.

300: Buckeyes quarterback Troy Smith threw for 316 yards in the win. Smith has appeared in 32 regular season games for OSU and has thrown for 300 or more yards in just two of them. Both of those games were against Michigan.

5-1: As I'm sure you've heard by now, the win improved Jim Tressel's record against Lloyd Carr and Michigan to 5-1. Tressel becomes the first coach to win five of his first six Ohio State-Michigan games since  Lloyd Carr, who pulled it off from 1995 to 2000. How quickly they forget.

9: Boston College has now produced three straight seasons with at least nine wins. Before this stretch, the Eagles had won nine or more games in only nine seasons, in a football-playing history that dates back to 1893. Just six of those seasons came after Frank Leahy bolted for Notre Dame after going 11-0 in 1940.

As long as we're on the historical perspective theme

6: Alabama's loss to Auburn gave the Tide six or more losses in a season for the fourth time in the last seven seasons. That equals the number of six-loss seasons Bama had in the first 89 seasons that it fielded a team, from 1892 to 1983.

If you exclude the horrific J.B. Whitworth era, when the Tide went 4-24-2 from 1955 to 1957 (and quickly solved their problems by hiring one Paul "Bear" Bryant), Bama has lost six or more games in a season more times since 2000 (four) than it did in the 102 previous seasons that Whitworth was not the schools' coach (three).

While they don't have quite the intensity of Ohio State-Michigan or the Iron Bowl, there are rivalry games this weekend that yield some interesting numbers.

21: Tennessee has beaten Kentucky 21 straight times -- with the Wildcats' last win coming in 1984. That's the second-longest streak in the nation among teams that play every year, trailing only the 43 consecutive seasons that Notre Dame has beaten Navy.

If the Wildcats can figure out a way to win Saturday in Knoxville, the victory would be particularly sweet for one member of their coaching staff: quarterbacks coach Randy Sanders. The much-maligned Sanders resigned last year as the Vols' offensive coordinator, making room for the David Cutcliffe Renaissance.

But while much has been written and said about the magic Cutcliffe has performed on the Vols' passing game, Sanders' contributions to the Wildcats' aerial attack are equally stunning. 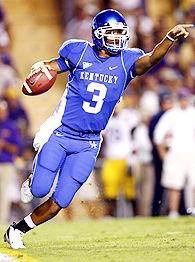 1,104: Florida State has rushed for 1,104 yards this season. Thirteen individual players have exceeded that total.

7: Updating a number we first looked at back in September, Chris Leak is looking to finish his career with seven straight wins in Florida's big three "rivalry games" against Tennessee, Georgia and Florida State. His streak of six in a row is one better than the previous mark held by Danny Wuerffel.

When Florida met Georgia last month, we noted that the true measure of the rivalry was the fact that the two schools couldn't even agree on their all-time record against one another. This, apparently, is a trend for the Bulldogs.

At issue, wins by the Jackets in 1943 and 1944, games that Georgia doesn't count because it claims Tech used players from a Naval officers training corps that were being housed on campus, but were not actually Tech students.

For what it's worth, The ESPN College Football Encyclopedia rules against Georgia (as it did in its dispute with Florida), counting both games as Tech victories.

9: Georgia Tech has won all nine of its prior matchups with Georgia when the Jackets have been ranked and the Bulldogs have been unranked. That number does include the disputed 1943 game, though, when Tech came in ranked 14th, so Georgia would say the streak is only eight games.

15: One indisputable streak the Jackets would like to break this weekend: They've lost to at least one unranked team 15 seasons in a row. The last time it didn't happen was 1990, when Bobby Ross' team won a share of the national championship. Tech's two losses this year have come to a Notre Dame team that was ranked second at the time and a Clemson team that was ranked 12th.

Keeping with the in-state rivalry theme, we move on to Oklahoma-Oklahoma State. These two met for the first time in 1904, when, technically, there couldn't have been a school named "Oklahoma State," because, well, Oklahoma wasn't a state (the school was named Oklahoma A&M back then).

In the ensuing years, the Sooners and the Cowboys have met 100 times on the football field, and the results have been quite one-sided.

16-77-7: Oklahoma State has posted an all-time record of 16-77-7 against the Sooners. That makes it the most one-sided rivalry between in-state foes in Division I-A. It is worth noting that five of the 'Pokes' wins have come in the last 11 years.

17: The Cowboys have a vastly improved offense that has turned the ball over just 18 times in 11 games so far this season after coughing it up 35 times in 11 games last season. That 17-turnover margin of improvement is the second-biggest in the country behind only Boise State, which has 16 turnovers one year after committing 34: an improvement of 18 (for the mathematically challenged).

Speaking of the Broncos, they're just one win away from clinching a BCS berth; they'll head to Reno to take on 8-3 Nevada on Saturday afternoon, and most of the numbers work decidedly in Boise State's favor.

38-1: Boise State is 38-1 in its last 39 WAC games, with the only loss in that span coming last year at Fresno State. Boise is 44-3 in conference games since joining the WAC six years ago.

41.8: The Wolf Pack will likely have to score in bunches to beat the Broncos. Boise has scored 41.8 points per game since 2000, the only team in the nation to average more than 40 in that span. Texas is second at 39.5.

41: Another BCS hopeful puts a home winning streak on the line when West Virginia hosts South Florida. The Mountaineers have won eight in a row in Morgantown, and their lowest point total in those eight wins is 41 points.

3.5, 4: Also in the Big East, Rutgers tries to keep its BCS hopes alive against Syracuse. The matchup to watch is when Syracuse has the ball. Rutgers averages 3.5 sacks per game (second-most in the nation), while Syracuse gives up an average of four sacks per game (tied for fourth-most nationally). 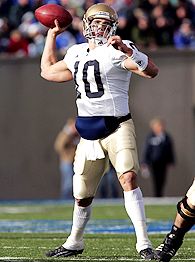 The game with the biggest BCS implications, though, is in Los Angeles, where USC and Notre Dame will revive college football's best intersectional rivalry. Todd McShay, Gerry DiNardo and I will be there for ESPN Radio's seven-hour College GameDay extravaganza, under the auspices of senior coordinating head honcho uber-producer (roughly his official title) Dave Zaslowsky.

A few numbers to keep in mind:

30: Brady Quinn has 35 school records at Notre Dame, but there's a 36th one out there that would definitely make this weekend extra-sweet for Quinn. A win over the Trojans would be No. 30 for Quinn as Notre Dame's starting quarterback, breaking the school record he currently shares with Tom Clements and Ron Powlus.

Impressive, but not quite as impressive as this number:

19-0: Pete Carroll is 19-0 in November as USC's coach. Six of Carroll's 19 November wins have been against ranked teams. None of Weis' have.

The Irish's coach on that day? Bob Davie. He'll be calling the game on Saturday night (ABC, 8 ET), and he'll join us, as he always does, to add his insights Saturday on College GameDay Radio.