How anyone could witness the events of the last two weeks and say that college football needs a playoff is beyond me. I was in Columbus for the Michigan-Ohio State game and in L.A. for the Notre Dame-USC game, and all I could think about was how the stakes for each of those showdowns would have been greatly diminished with a playoff. Would you rather have teams battling for spots in the BCS Championship Game or teams battling for playoff seeding?

While I would favor going to a plus-one system (essentially a Final Four) in order to avoid situations like what happened two years ago with Auburn or three years ago with USC, the fact is this system has worked well the last couple of years. Last season it was clear which two teams were the best. What would a playoff have done other than to jeopardize one of the most exciting games in college football history? This year has been great. There have been huge matchups, massive hype and more focus on college football than I can ever remember.

I actually think college football gives us a better chance of crowning the best team as the champion than any other sport because the lack of a lengthy postseason means the top teams have fewer chances to be upset en route to the championship. Playoff systems are far from perfect. The 83-win Cardinals winning the World Series is an example. Does anyone really believe they're baseball's best team? Of course not. But since we went through a playoff to get there, they're accepted as the champs. The same could be said of the Super Bowl champion Steelers, who were the sixth seed out of the AFC last year, or the Edmonton Oilers, who were the eighth seed in the Western Conference last season but made the Stanley Cup Finals.

That's one way to do it, but I think college football's way works, too. (However, I'm certainly not advocating doing away with the World Series, Super Bowl or Stanley Cup.)

As I've learned firsthand, this isn't the most popular stance in the world. I went on Mitch Albom's radio show about five or six years ago spouting this stuff and was dismissed so curtly that, in the host's mind, my appearance might have been subtitled "Monday with the Moron." Still waiting for him to have me on again. On my own show last Saturday, our buddy Chris Fowler lumped me with the "two dinosaurs" (his words) who sit next to him every Saturday morning on "College GameDay."

Could the system use some changes? Sure. Again, I favor the plus-one model, which would eliminate the complaints of Michigan and Florida this year. I also definitely think margin of victory needs to be factored back into the computers -- perhaps capped at 21 points to avoid having teams run up the score. But I think going to an eight- or 16-team playoff would be a huge mistake that would diminish the importance of the regular season.

Anyway, off the soapbox, and on to the numbers.

Still a few rivalry games left to be played out -- USC-UCLA, Stanford-Cal and one of the sports' best rivalries in Army-Navy. All three have been quite one-sided as of late.

30.5: Navy has won its last four matchups with Army by an average of 30.5 points. If the Midshipmen win Saturday, this will go down as the most dominant stretch in the history of the rivalry. It would be only the fourth five-game winning streak for either school -- and the average margin of victory in the other three streaks has never been more than two touchdowns. Even a one-point Navy win would keep the Middies' average margin at 24.6 points. 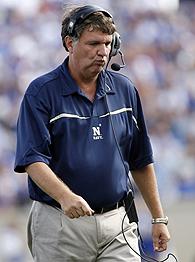 4: Navy has punted just four times in the last three games, which seems impressive. It's even more impressive when you consider that all four of the punts came in the Midshipmen's last game against Temple. They didn't punt once against Duke or Eastern Michigan, although they did lose five fumbles in those two games. Still, no punts in two games! Navy is the first team to go back-to-back games without a punt since Clemson in 1988.

35: Army would have liked to have punted a bit more. The Cadets have lost 35 turnovers, tied with Illinois for the most in the country. They're dead last nationally in turnover margin.

23.5: As for the mismatch that is "The Big Game," Cal has won four straight against Stanford by an average of 23.5 points. Before Jeff Tedford arrived in Berkeley, the Cardinal had won seven in a row in the series.

1: Herbert Hoover may not have had the greatest timing when it came to his Presidential years, but he couldn't have picked a better time to enter college. Hoover claimed to be the first student ever at Stanford, by virtue of having been the first person in the first class to sleep in the dormitory. He later went on to serve as student manager of both the baseball and football teams, making him the one and only U.S. President to serve as team manager in "The Big Game."

455: Stanford's defense suffered through an early-season depression (couldn't resist), giving up an average of 455 yards per game through its first six outings.

315: The Cardinal has been far more respectable in its last five games, yielding just 315 yards per game. It hasn't helped much in the win column, though. This is the first time Stanford has ever entered the Cal game with 10 losses.

7: Much like the battle of Northern California, the USC-UCLA series has been streaky of late. The Trojans have won seven in a row against their crosstown rivals. This after the Bruins had won the previous eight.

5: With a win, the Trojans would have beaten both Notre Dame and UCLA five times in a row, something no USC team has ever done.

One team that will be rooting against them, the Florida Gators, whose faint BCS Championship Game hopes depend on a Trojans loss.

5th, 4th: Florida's battle with Arkansas in the SEC Championship Game will be a classic strength-against-strength matchup. Florida's defense, which is fifth in the nation against the run faces Arkansas' fourth-ranked rushing attack.

45: Darren McFadden has rushed for 1,485 yards for the Razorbacks, which is more than 45 teams in the Bowl Subdivision (that's the new name for Division I-A. Division I-AA is now the Championship Subdivision. Try easily dropping that into casual conversation). Among the teams McFadden has personally outrushed are Florida State, Miami, Tennessee, Boston College, and Virginia Tech. He's six yards behind Notre Dame. If Charlie Weis is indeed an offensive genius, then what does that make Gus Malzahn, who, one year ago, was coaching high school?

37: Of course, McFadden isn't Arkansas' only weapon in the backfield. Felix Jones has rushed for 961 yards. Only 37 sets of teammates have ever both gone over 1,000 yards rushing in a season in the history of the Bowl Subdivision (it's getting easier), including Steve Slaton and Patrick White of West Virginia, who pulled it off this year.

11: McFadden (7) and Jones (4) have 11 100-yard rushing games between them this season, but they'll have their work cut out for them getting to that mark on Saturday.

17: It's been 17 games since the Gators have allowed a 100-yard rusher. LSU's Joseph Addai was the last back to go over the century mark on Florida, rushing for 156 yards against the Gators on Oct. 15 last year.

349.6: McFadden isn't just a threat to run it. He's also lined up at quarterback 52 times this season, and the Razorbacks have gained an average of 8.6 yards on those plays. McFadden is a perfect 5 for 5 passing with 2 TDs, which is good for a QB rating of 349.6.

26: All this explosiveness has added up to 26 scoring drives of five plays or less for the Hogs this year. Hawaii leads the nation with 30 such drives. West Virginia is third with 25.

375: Speaking of the Mountaineers, their potent running combo of White and Slaton was held to just 60 yards combined on the ground last week against South Florida. That's a mere 375 less than they pounded out the week before against Pittsburgh.

312.1, 98.8: Much like the Florida-Arkansas matchup, Rutgers is good at stopping what West Virginia does well. The Mountaineers average 312.1 yards per game on the ground, but the Scarlet Knights give up just 98.8.

0-14: Historically, Rutgers hasn't been so hot at stopping West Virginia, going 0-14 all-time in Morgantown. Back in 2001, Greg Schiano's first season as Rutgers' coach, the Scarlet Knights lost 80-7 at Mountaineer Field.

2: Of course, Rutgers has spent all year bucking historical trends. The win over Syracuse last week gave the Scarlet Knights 10 wins, meaning Rutgers now has two double-digit victory seasons in 137 years of football. By comparison, Oklahoma has the most 10-win seasons with 29.

10: Among the Sooners' 10 wins this season are three victories against the Big 12 North. Including conference championship games, OU has won 10 straight games against teams from the North, with the last loss coming to Kansas State in the 2003 Big 12 Championship Game. 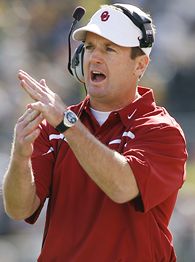 33, 48.2 percent: OU will face a Nebraska team that has dramatically improved its run game over a year ago -- a stat I've documented throughout the year. As a result, the Huskers have faced far fewer third-and-long situations, which has helped their third-down conversion percentage dramatically. Nebraska converted just 33 percent of its third downs last year. The Huskers are up to 48.2 percent this year.

396, 232: Speaking of improvement, Oklahoma's defense has gotten better by leaps and bounds after starting the season sluggishly. The Sooners gave up an average of 396 yards per game in their first three outings -- with all three opponents going over 300 yards on them. In their last nine games, they're giving up just 232 yards per game. They've only allowed more than 300 twice.

While Oklahoma-Nebraska sounds like a championship game matchup, Wake Forest-Georgia Tech sounds more like a good basketball game. But, here they are battling for the ACC Title and a BCS berth. Not exactly what the league had in mind when it added Miami, Florida State and Boston College.

To understand just how unlikely the Wake story is, consider these numbers:

8: The Demon Deacons have suffered through eight winless seasons in 54 years of ACC play.

7: Wake has enjoyed just seven winning seasons in those 54 years of the ACC. They had only finished more than one game over .500 in conference play twice before going 6-2 this year.

6-0: Along the way, Wake went 6-0 on the road. They're the first team ever to do that in the history of the ACC out of the 113 teams that have played six road games in a season.

9: They'll face a Georgia Tech team that is battling a familiar foe -- inconsistency from quarterback Reggie Ball. The fourth-year starter was just 6-of-22 for 42 yards and two picks in the loss to Georgia last week. In his 48 career appearances, Ball now has nine games where he has either failed to throw for 100 yards or thrown three interceptions (he's done both in a game twice).

That'll do it for this week and for this column (at least for this year). Definitely a learning experience for me, as it was the first time I had ever attempted a weekly column. Thanks to the many who offered advice and feedback, particularly my ESPN Radio co-hosts Todd McShay and Gerry DiNardo.

Hopefully, I'll bump into some of you in the offseason as I wander through the Bowl Subdivision, decrying the landscaping decisions.