HOOVER, Ala. -- Did Ole Miss coach Ed Orgeron count the proverbial chicken before the egg hatched? In February, when the Rebels beat out schools such as Kansas State, North Carolina State, Virginia Tech and Wisconsin to sign junior college quarterback Brent Schaeffer, Orgeron named the fleet-footed passer his starter -- before the player was even academically qualified.

Nearly six months later, and with the Rebels reporting for preseason practice in a week, Schaeffer still hasn't arrived in Oxford, Miss., because he hasn't completed his course work. Orgeron expected Schaeffer to graduate in June from College of the Sequoias in Visalia, Calif., and then join his new teammates for offseason workouts at Ole Miss. When that didn't happen, Schaeffer returned to his home in Florida and enrolled in correspondence courses to complete the six academic hours he needed for admission. 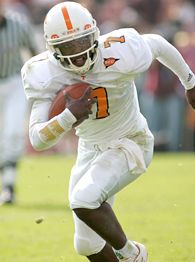 But that plan seemed to be on its way to faltering, too, so Orgeron sent the quarterback back to College of the Sequoias, where Schaeffer is enrolled in a four-week summer school session that ends Aug. 3. Even if Schaeffer passes his classes, he certainly would miss the first few days of preseason practice. That would leave him less than four weeks to learn the team's new offense before the Rebels' Sept. 3 opener against Memphis.

"I'll say it to you now, if everything goes as planned, Brent Schaeffer is going to be our starting quarterback," Orgeron said Thursday, during SEC Media Days here. "We're excited about Brent Schaeffer. He brings excitement to our football team, something we need in our offense."

Tennessee coach Phillip Fulmer was very excited about Schaeffer, too. Schaeffer started three games as a freshman for the Volunteers in 2004, becoming the first SEC true freshman in 59 years to start an opener. But he lost the starting job a few weeks later to Erik Ainge, then broke his collarbone and didn't play again that season.

In April 2005, Schaeffer and another Tennessee player were involved in a fight in a dormitory lobby. Schaeffer pleaded guilty to reduced charges of offensive touching and was ordered to pay restitution to another student, who needed four staples to close a head wound. Fulmer advised Schaeffer he needed to continue his career somewhere else and pushed him out the door.

So perhaps naming Schaeffer the Rebels' starting quarterback wasn't Orgeron's biggest leap of faith. Maybe it was having so much confidence that a player with a checkered past would fulfill his academic duties.

When and if Schaeffer arrives at Ole Miss, he'll have two seasons to play for the Rebels. His short tenure at Tennessee and the College of the Sequoias, where he threw for more than 4,000 yards, 40 touchdowns and 16 interceptions, while rushing for another 854 yards and 12 scores, prove he'll need a lot of direction.

"We decided it was best for Brent to go back to the College of Sequoias because there was an ending date," Orgeron said. "When you take correspondence courses, there's an open-ended date. Some of the courses were taking too long to complete. I didn't know if he could complete them by the time camp started."

The Rebels don't seem to have much of a backup plan if Schaeffer doesn't end up enrolling this year. Walk-on Seth Adams, a junior college transfer from Hinds (Miss.) Community College, left spring practice atop the depth chart. Adams played sparingly in two seasons at Division II Delta State before throwing for 1,500 yards and 13 touchdowns at Hinds last season. Redshirt freshman Billy Tapp and Cliff Davis, a former minor league baseball player and another walk-on, are behind Adams. Robert Lane, who played quarterback last season and nearly transferred to Division I-AA Northwestern State after losing the starting job, has moved to tight end and won't return to quarterback, Orgeron said.

Not having Schaeffer on campus "isn't a big deal to us," Lane said. "We all knew he was going to have academic problems."

The Rebels' offense was undone by poor quarterback play during Orgeron's first season in 2005, in which they finished 3-8 and 1-7 in the SEC. Ole Miss scored 148 points, fewest in the SEC, ranked last in the league in rushing and threw twice as many interceptions (18) as touchdown passes (nine).

Orgeron is hoping they've got Schaeffer to be the trigger man.

Another decade for Spurrier?
South Carolina coach Steve Spurrier recently said he hoped to coach the Gamecocks for another 10 years and didn't back down from that statement on Thursday.

"I guess I felt pretty good that day and I feel pretty good today, to tell you the truth," Spurrier said. "Age is a funny thing. I've always said if I start acting like an old dude and talking like an old dude, they need to get rid of me. But in those eight or nine months after coaching the Washington Redskins, I found out coaching was a lot better than doing nothing."

Spurrier, who turned 61 in April and recently celebrated his 40-year wedding anniversary, is in the second year of a seven-year contract with the Gamecocks. South Carolina was 7-5 in his first season. 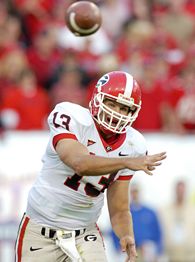 Perhaps of even greater concern for Georgia is finding receivers. The Bulldogs apparently won't have senior Sean Bailey, the team's best deep threat last season, after he tore the anterior cruciate ligament in his knee during practices before their 38-35 loss to West Virginia in the 2006 Sugar Bowl. Richt said Wednesday that Bailey probably would redshirt this season while continuing rehab. Their other top receiver, Bryan McClendon, graduated and tight end Leonard Pope left for the NFL draft.

Sophomore Mohamed Massaquoi caught 38 passes for 505 yards and two touchdowns as a freshman and will be Georgia's No. 1 target. But finding more receivers to go around him is of utmost concern.

Juniors A.J. Bryant and Mikey Henderson made the most progress in the spring, Richt said, but neither is a polished receiver. Bryant was a high school quarterback and has been dogged by injuries at Georgia. Henderson, a 5-foot-10 former cornerback, moved to receiver in the spring. Sophomore Kenneth Harris has good size but lacks breakaway speed, and senior Mario Raley has never realized his potential because of injuries.

Fulmer not counting on magic
Tennessee coach Phillip Fulmer, under pressure after the Volunteers finished 5-6 in 2005 and didn't play in a bowl game for the first time in his 14 years as coach of his alma mater, hopes fans aren't counting on too much from offensive coordinator David Cutcliffe.

Cutcliffe, who earned the reputation as an outstanding quarterbacks coach after tutoring Eli and Peyton Manning, came back to Tennessee after he was out of coaching last season. He worked 17 years at Tennessee before leaving to become head coach at Ole Miss after the 1998 season. Cutcliffe was fired unceremoniously by the Rebels after the 2004 season, despite a 44-29 record and 4-1 mark in bowl games.

Cutcliffe was hired by Charlie Weis to be Notre Dame's assistant head coach/quarterbacks coach last season, but then had underwent triple bypass surgery in March 2005 and resigned for health reasons.

"I think sometimes people think you've got this magic dust that you're just going to go out there and sprinkle on an offense or defense or a punter or kicker or coach or whatever, and everything's just going to be perfect," Fulmer said. "It takes a lot of work and a lot of time for things to change. What David brings is a really sound, fundamental system to coach the quarterbacks and to run the offense that's been proven over a period of time."

Fulmer said he erred in shuffling Ainge in and out of games, with senior Rick Clausen starting at the end of the season.

"We all saw the potential of a young Erik Ainge as a freshman that led us to the Eastern Division championship," Fulmer said. "Certainly, looking back, I could have managed that differently. Hindsight is 20/20. Either named him as the starter in the spring or let him compete in the fall. Maybe he doesn't win the job until the fourth, fifth ball game, or maybe not at all. I would have managed that differently."

Extra points
Alabama coach Mike Shula is expected to meet this week with linebacker Juwan Simpson, who pleaded guilty Wednesday to misdemeanor possession of a handgun without a license. Simpson was fined $100 and ordered to pay $200 in court costs. Misdemeanor charges of receiving stolen property were dropped, and a misdemeanor charge of possession of marijuana will be dismissed if Simpson completes an educational program. Simpson is the Crimson Tide's top returning tackler.  With starting tackle Daniel Inman suspended for Georgia's first two games, against Division I-AA Western Kentucky and at South Carolina on Sept. 9, Richt said senior Michael Turner will start at tight tackle and senior Ken Shackleford will start at split tackle.  South Carolina opens the college football season for the second season in a row when the Gamecocks play at Mississippi State on Aug. 31. Spurrier has never won a game in Starkville, Miss.  When asked how he felt about his team having to play a 12-game schedule, Spurrier said: "I went and saw our girls' basketball team play four straight nights at the SEC tournament, and they weren't bitching and moaning."  Give Vanderbilt coach Bobby Johnson credit. The season after his team lost quarterback Jay Cutler, an NFL first-round draft choice by the Denver Broncos, he agreed to drop a home opener against Middle Tennessee State for a Sept. 2 road game at Michigan. The Commodores, who expect to start Arizona transfer Richard Kovalcheck at quarterback, play at Alabama the next week. "When we finally decided to do it, everybody's on board, we're 100 percent behind the decision," Johnson said. "The obvious con against playing it is we don't have an experienced quarterback. You go into one of the biggest, loudest stadiums in the country. You expect that guy to run your offense and execute it, be cool under pressure, that's a lot to ask of a young man."