HOOVER, Ala. -- Auburn coach Tommy Tuberville has survived a coup from within his own administration and coached six seasons in the state where college football seems to matter most. 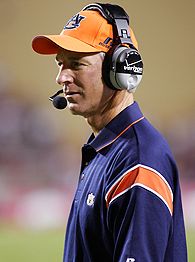 So perhaps it should come as no surprise that about a month before a season in which the Tigers are a popular choice to win the SEC, Tuberville seems unfazed by his school's investigation into alleged academic irregularities involving his players.

Earlier this month, The New York Times reported that Auburn sociology professor Thomas Petee gave 18 football players from the 2004 team that finished 13-0
and ranked No. 2 in the country high grades in classes that required no attendance or little work. Petee offered the directed-study courses to more than 250 students during the 2004-05 academic year, The Times reported, and a large percentage of them were nonathletes.

James Gundlach, another Auburn professor, alleged that the players received higher grades in Petee's classes -- the 18 players took a combined 97 hours of Petee's
courses during their careers, according to The Times -- than they were awarded in other courses. A committee appointed by Provost John Heilman is investigating the matter, and the school's board of trustees is expected to approve academic reform measures at an Aug. 4 meeting.

"It's an academic issue," Tuberville said Friday, during SEC Media Days. "Our president obviously gave me strict orders -- let's complete the investigation before we make any rash judgments. If we're doing something wrong, please look at it and tell us. We're going to do things right. I promise you, we'll change it. I don't foresee anything
happening."

Neither does SEC commissioner Michael Slive, who this week defended Auburn by saying that directed-study courses also are offered at Ivy League schools.
Historically, the NCAA hasn't delved into academic matters involving individual institutions unless the schools self-report violations.

When former Tennessee professor Linda Bensel-Myers alleged that football players there were being given preferential treatment, school officials investigated the allegations that English tutors wrote and co-wrote papers for athletes. The Tennessee investigation found no evidence of wrongdoing, so the NCAA never took action.

"I really can't say anything about it until we get done," Tuberville said. "Hopefully, it's before the season. I'm pretty sure it will be. Our people have been working very hard trying to catch people -- students that are not on campus, that are home for the summer. We'll just have to see what happens from there."

Tuberville said 98 Auburn football players have graduated during the last three years and 15 received degrees from the sociology department, where Petee was
the highest-ranking faculty member.

Former Auburn stars Carnell "Cadillac" Williams, now a starting tailback for the NFL's Tampa Bay Buccaneers, and cornerback Carlos Rogers, who plays for the
Washington Redskins, took Petee's classes. According to data Gundlach gave to The Times, football players in Petee's classes had an average grade-point average of 3.31.

The players had a 2.14 GPA in their other courses at Auburn, according to Gundlach's statistics. One player took seven such courses from Petee, and
many of the students in his directed-study courses were transfers from junior colleges.

"Obviously, when you come from a junior college, you want to make sure you're successful early," Tuberville said. "But you want to make sure they get a degree in
what they want to get one in. We want them to get a degree where they're going to have an opportunity to go back home in their environment -- if they go back
home -- to have the opportunity to be successful, to be a positive part of their community. Whether it's sociology or pre-med, you know, it's up to them."

Auburn linebacker Will Herring said the issue hasn't been much of a distraction for the Tigers, who finished 9-3 last season and lost to Wisconsin 24-10 in the Capital One Bowl.

"To be honest, as a team, we really haven't gotten caught up in it," Herring said. "Yet, it kind of hurts me because we're all a family. I've seen some guys' names being dragged into it. It does hurt. But when you're on top and the better you are, the farther people want to see you fall."

Auburn, which opens preseason practice Tuesday and plays its first game at home against Washington State on Sept. 2, was an overwhelming choice by the media to win the SEC championship. The Tigers received 73 of 104 votes.

The Tigers play four of their toughest opponents -- LSU, Arkansas, Florida and Georgia -- at home and play only four of their 12 games on the road.
"I appreciate the target you put on my back," Tuberville told reporters. "Last time you did that, it almost got me fired."

Before the 2003 season, the Tigers were an overwhelming choice to win the SEC and at least one national sports magazine ranked them No. 1 in the country. But Auburn lost its first two games, against Southern California and Georgia Tech, and finished 7-5.

They wanted to hire Petrino to replace the disgraced Tuberville. But when the clandestine meeting became public, Auburn fans rallied around their coach, and the president and athletics director later stepped down. The next season, Auburn went undefeated and beat ACC champion Virginia Tech in the Sugar Bowl.

The Tigers were left out of the national championship game because USC and Oklahoma, which were ranked higher during the preseason, finished undefeated, too.
So Tuberville knows things could be worse on The Plains.

Croom: Plan on track
Mississippi State coach Sylvester Croom hopes the third season of his tenure is a much better barometer of his program than the first two seasons, when the Bulldogs went a combined 6-16 overall and 3-13 in the SEC. Because of attrition and problems under former coach Jackie Sherrill, the Bulldogs were forced to play too many freshmen, including several offensive linemen.

"I can remember looking out there and seeing Anthony Dunning playing against LSU," Croom said. "Dunning went to a high school with about 17 players, and now he's playing against LSU in the third or fourth game of the season. I was worried someone was going to come arrest me for putting him out there."

Improving an offense that ranked 113th in Division I-A in scoring, 109th in passing and 113th in total offense is of utmost concern.

By adding juco transfers to the offensive line and receiver corps, Croom hopes he finally has enough talent to run the West Coast offense he wanted to employ from the start.

"We can finally run the offense now and do things we like doing," Croom said. "We basically went into a shell last year and became very conservative. It's because we didn't have wide receivers or offensive linemen."

QB battle at LSU?
LSU coach Les Miles said junior JaMarcus Russell would be the Tigers' starting quarterback when they open preseason practice Aug. 6. Russell had a 10-2 record as a starter last season, but hurt his shoulder in the Tigers' 34-14 loss to Georgia in the SEC Championship Game. 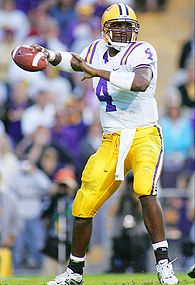 Junior Matt Flynn started against Miami in the Peach Bowl and was named Most Outstanding
Player, completing 13 of 22 passes for 196 yards and two touchdowns in a 40-3 victory.

Miles said that Russell, who threw for 2,443 yards, 14 touchdowns and nine interceptions last season, has recovered from shoulder and hand injuries and will be the No. 1 quarterback going into camp. The Tigers also have highly regarded freshman Ryan Perrilloux.

Miles said he has been bombarded by questions concerning his quarterbacks throughout the offseason, even during a USO tour of the Middle East.

"We took a C-130 into Baghdad," Miles said. "We moved around those bunkers that were hit by the 1,500-pound bombs. What was going on in Baghdad was very obvious.
About 11:30 that night, I had a young man from Louisiana come in and say, 'OK, coach, tell me who's the starting quarterback.' So I went home. I'm not a very good traveler. When you deal with a nine-hour difference in your travel time, your sleep patterns are messed up badly.

"I'm at home at 3 o'clock in the morning, and there is no sleep in my future. Heck, I'd been in Iraq for a week, eight days, so you miss your wife. I kind of wanted to wake her up. You know, I'm, 'Psst!' I kind of scooch over and nudge her a little bit. Well, she was mad. She rolled over and looked at me. She gathered her wits about her and says, 'So, tell me, who you going to play at quarterback?'"

Extra points
Florida coach Urban Meyer said junior Reggie Nelson has moved from safety to cornerback as the Gators try to replace starters Vernell Brown and Dee Webb.
"Reggie Nelson is an exciting football player," Meyer said. "We made that move several weeks ago, and he has responded well. We think he'll answer the bell." Meyer said four freshmen -- Markihe Anderson, Jacques Rickerson, Derrick Robinson and Wondy Pierre-Louis -- would have chances to play this season.  The Gators might add former Utah cornerback Ryan Smith, who was a freshman All-American on the 2004 Utes team that finished undefeated under Meyer's direction.
Smith, who lost his starting job at Utah midway through last season, was redshirted in 2003 and has two years of eligibility remaining. He was scheduled to receive a bachelor's degree in sociology from Utah earlier this month and has applied to graduate school at Florida. Under new NCAA rules, he would be eligible to play football at Florida this season without penalty.  Florida defensive tackle Steven Harris, whom Meyer banned from all team functions during the spring so he could clean up personal issues, hasn't rejoined the team yet. Meyer said there is still a chance of Harris playing this coming season. Harris -- who, along with former Gators linebacker Channing Crowder, was arrested in May 2003 and charged with battery after a man was beaten outside a nightclub in Gainesville, Fla. -- started 12 games in 2005.  Florida quarterback Chris Leak said his goal this season is to throw 50 touchdown passes -- and win an SEC championship.  After the Gators finished 1-3 on the road last season, Meyer asked former Notre Dame and South Carolina coach Lou Holtz to speak to his assistants. Holtz traveled to Gainesville on Thursday and met with Meyer's staff. Holtz's teams at South Carolina were 9-22 on the road, including an abysmal 1-11 mark against SEC East foes Georgia, Tennessee and Florida and state rival Clemson.  LSU receiver Dwayne Bowe, who was plagued by dropped passes last season, underwent corrective eye surgery during the offseason. "Obviously, he felt like there was a need," Miles said. "We were supportive."