Florida State coach Bobby Bowden knows why his team is playing rival Miami at the Orange Bowl on Monday night, rather than some I-AA patsy like so many of college football's other top 25 teams played this weekend.

"The publicity part of it, you can't buy it," Bowden said. "You can't pay enough money to get that type of national attention."

Two years ago, when the ACC launched its expanded league, it made sense for the Seminoles and Hurricanes to play on Labor Day night. With the addition of Miami, the ACC had one of college football's most celebrated rivalries. What better stage for the league to flaunt its addition than on national television on what is traditionally considered the last day of summer?

But the first two editions of the ACC's FSU-Miami contest proved the league would be better served to stage the game later in the season. While the last two games of the rivalry have been close -- Miami won 16-10 in the Orange Bowl on Sept. 10, 2004 and Florida State won 10-7 in Tallahassee on Sept. 5, 2005 -- neither was an instant classic. There was little offense in either game, and both contests were plagued by penalties, turnovers and special teams gaffes.

"It forces you to come out sharp," Miami quarterback Kyle Wright said. "Normally, teams have warmup games where you can go out and make mistakes and still come out on top. We know we've got to come out and be sharp. It's a great challenge right out of the gates. It forces you to be on top of your game."

Thankfully, this will be the last season in the foreseeable future in which Florida State and Miami will play in an opener. The game will be moved to later in the season, probably to the first Saturday in October. In the future, the game might actually decide which team plays in a BCS bowl game or stays in contention for a national championship.

As it stands now, the game has less bearing on the ACC standings (the teams are in different divisions) and the national championship race. After Monday night, both teams will still have 11 games left to play, so this game hardly decides anything.

Last season, Miami lost to the Seminoles when punter Brian Monroe botched the hold on what might have been a game-tying field goal with 2:30 left. But the Hurricanes then reeled off eight consecutive victories and climbed to No. 3 in the national rankings. Miami was very much in the BCS title game race until it lost to Georgia Tech (that loss also knocked the Hurricanes out of the inaugural ACC championship game, which the Seminoles won).

So when Florida State and Miami play this early in the season, there are still months to recover and climb in the rankings.

"I have mixed emotions about it because, as I've said before, the media attention that this game brings to our players and the university is really special," Miami coach Larry Coker said. "We're still going to play Florida State, whether it be the first game or in the middle of the season or whenever."

November is supposed to be the month to remember in college football. That's when many of the sport's biggest rivalries are played. On Nov. 18, Michigan plays Ohio State. California faces Southern Cal. Auburn and Alabama play the Iron Bowl.

On that day, Florida State hosts Western Michigan and Miami plays at Virginia.

"I don't think anyone enjoys opening with Miami," Bowden said. "Miami is one of those teams where there is not a good time to play them."

On (and off) the Mark

In this space a week ago, I criticized Alabama coach Mike Shula for not announcing a suspension for linebacker Juwan Simpson, who was arrested during the offseason on handgun and drug charges (the handgun charge was subsequently dropped; Simpson entered a drug program to wipe out the other misdemeanor charges). The response from the Crimson Tide Nation was predictable. Alabama fans defended their coach, and criticized me for, well, jumping the gun. Simpson wouldn't play in the Tide's opener against Hawaii, many Alabama fans told me in e-mails, so just wait and see. 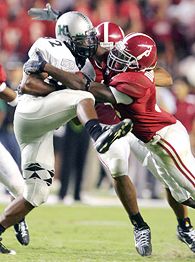 Well, not only did Simpson play against the Warriors on Saturday, but he started the game and played well in Alabama's 25-17 victory. When Simpson was asked during training camp what he would do about his punishment, the senior replied, "I would give him an ice cream cone." Who thought Shula would add hot fudge and nuts?

On the Mark
Tennessee, which played so poorly during its 5-6 season in 2005, might have turned in the most dominating performance of the weekend. The No. 23 Volunteers socked No. 9 California on the game's opening play -- Bears starting tight end Craig Stevens was knocked out of the game with a concussion on the opening kickoff -- and the Pac-10 program never responded mentally or physically. The Volunteers led 35-0 in the third quarter and could have named a final score.

Tennessee quarterback Erik Ainge threw four touchdown passes after tossing only five last season, and it seemed as if David Cutcliffe had waved his magic wand again in his first game back as Tennessee's offensive coordinator. With receivers Robert Meachem and Bret Smith, and an offensive line that is finally keeping Ainge upright, the Volunteers have the potential to be explosive again on offense. Their defense is very, very fast and physical.

But let's not get ahead of ourselves. California was grossly overmatched and, to be honest, seemed poorly prepared. Tennessee plays Air Force at Neyland Stadium on Saturday and then hosts No. 7 Florida on Sept. 16. If the Vols beat the Falcons and Gators, then they're serious SEC championship contenders again.

"We won one game," Cutcliffe said. "We haven't arrived by any stretch of the imagination."

Off the Mark
The first weekend of the college football season claimed two of the game's most likable stars. Louisville tailback Michael Bush, a Heisman Trophy candidate, and Clemson linebacker Anthony Waters, the ACC's top returning tackler, both suffered season-ending injuries in their first games.

Bush, who led the country in scoring in 2005 and reluctantly returned to Louisville for his senior season because he wasn't projected as a first-round choice in this year's NFL draft, broke his right leg early in the third quarter of the Cardinals' 59-28 victory over rival Kentucky. Before he was hurt, Bush ran for 128 yards and three touchdowns and seemed faster and more explosive than a year ago. His injury casts serious doubt on Louisville's chances of beating West Virginia in the Big East and contending for a BCS bowl game.

Waters, while not as acclaimed as Bush, was the heart and soul of Clemson's defense. He, too, returned to college for his senior season after testing NFL draft waters. He had 179 tackles in the last two seasons and was a vocal leader. The Tigers will have to play consecutive road games at Boston College and No. 11 Florida State the next two weeks without their top two linebackers: Waters and senior Tramaine Billie, who is expected to miss the first half of the season with a broken ankle.

On the Mark
Nice start for the Big East, which is still trying to solidify its position as a BCS conference. Big East teams went 7-1 in non-conference games during the first week of the season. Two Big East teams blasted instate rivals -- Louisville over Kentucky and No. 5 West Virginia's 42-10 win over Marshall. Just as impressive, Pittsburgh walloped Virginia 38-13. The Panthers had four one-play scoring drives and held the Cavaliers to 52 rushing yards. Also, Rutgers put North Carolina coach John Bunting back on the hot seat with a 21-16 win in Chapel Hill, N.C.

Off the Mark
Bad start for the ACC. Along with losing the two games to Big East schools, Duke was shut out by Division I-AA opponent Richmond in a 13-0 loss. Two other ACC teams struggled against I-AA opponents: Maryland beat William & Mary 27-14 and NC State beat Appalachian State 23-10.

Central Michigan had a chance to tie the game late in its 31-24 loss to Boston College on Thursday night, and Wake Forest couldn't put away Syracuse, which won one game in 2005, until the fourth quarter of its 20-10 victory. This league still looks like a three-team race between Florida State, Miami and Virginia Tech. 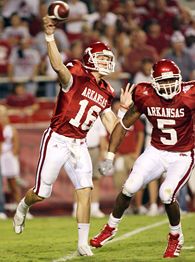 On the Mark
Three freshman quarterbacks made their debuts in the SEC and left each of their respective campuses buzzing. Freshman quarterback Mitch Mustain's performance might have been the only bright spot for Arkansas in its 50-14 loss to No. 6 USC. He completed 4 of 6 passes for 47 yards and ran for a 4-yard touchdown. It was enough for Hogs coach Houston Nutt to name him the starter for Saturday's game against Utah State. Junior Robert Johnson didn't play well against the Trojans, completing 12 of 25 passes for 110 yards with two interceptions, so he was moved to receiver.

Matthew Stafford played three series in No. 15 Georgia's 48-12 win over I-AA Western Kentucky, completing 3 of 5 passes for 40 yards and one touchdown. The strong-armed rookie from Highland Park, Texas, will probably go into Saturday night's SEC East showdown at South Carolina as the No. 2 quarterback, behind starter Joe Tereshinski III.

Florida's Tim Tebow didn't play that much in a 34-7 win over Southern Mississippi, but showed a lot of speed on a 4-yard touchdown run in the second half. He will continue to play more and more behind starter Chris Leak.

Off the Mark
Division I-AA Montana State was supposed to be the $275,000 sacrificial lamb for the start of the Dan Hawkins era at Colorado. Instead, the Bobcats ruined Hawkins' debut in Boulder, with a stunning 19-10 upset. The Buffaloes are now mired in a five-game losing streak and still seem haunted by their last two defeats of 2005: 30-3 to Nebraska and 70-3 to Texas in the Big 12 championship game.

Colorado quarterback James Cox completed only 8 of 22 passes for 110 yards, and the Buffaloes ran for just 106 yards. It could get much worse for Hawkins before it gets better. Colorado plays rival Colorado State at Invesco Field at Mile High in Denver on Saturday, then hosts No. 24 Arizona State on Sept. 16 and plays at No. 15 Georgia on Sept. 23.

On the Mark
It's not supposed to be this easy, even for a program like USC. After losing the last two Heisman Trophy winners, quarterback Matt Leinart and tailback Reggie Bush, along with a boatload of other players who left for the NFL, the Trojans blasted Arkansas on the road, winning 50-14. The victory wasn't as bad as last year's 70-17 shellacking of the Hogs, but it was just as impressive.

In their first game, the Trojans showed they're still a BCS contender. And because USC plays Nebraska, Arizona State, Oregon, California and Notre Dame at home, it might indeed be the favorite.

Off the Mark
As expected, No. 1 Ohio State's offense was impressive in its 35-12 win over Northern Illinois on Saturday. Quarterback Troy Smith threw three touchdowns on 18-for-25 passing. Running back Antonio Pittman had 111 rushing yards, and freshman Chris Wells added 50. Wide receiver Ted Ginn Jr. had four catches for 123 yards and two scores and averaged 22 yards on two punt returns.

But don't think Buckeyes coach Jim Tressel isn't concerned about his defense. The Buckeyes, who have nine new starters on defense, allowed 343 yards offense against Northern Illinois. Star tailback Garrett Wolfe ran for 171 yards and caught five passes for 114 yards and one touchdown, much of the damage coming on screen passes.