COLUMBIA, S.C. -- Auburn coach Tommy Tuberville watched his No. 2-ranked football team control the third quarter against South Carolina on Thursday night -- all 900 seconds, to be exact, as the Gamecocks failed to run a play from scrimmage in the entire quarter.

Thanks to a 17-play drive that lasted more than 8½ minutes and resulted in a field goal, and a 13-play touchdown drive that came after a successful onside kick, the Tigers led by two touchdowns after the first play of the fourth quarter.

Yet, with 26 seconds left, Auburn's defense was backed up to its 5-yard line, preparing for the biggest play of its season. South Carolina faced fourth-and-1 and everybody on the field, on the sidelines, and perhaps each of the 74,374 fans at rain-soaked Williams-Brice Stadium, knew exactly where the football was going to be thrown. 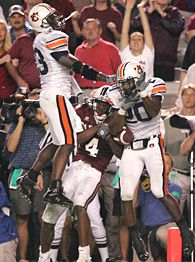 As Auburn prepared to break its defensive huddle and make one last attempt at protecting its seven-point lead and avoid overtime, senior cornerback David Irons turned to junior Patrick Lee.

"It's coming your way," Irons told Lee, who had been forced into the starting lineup after Jonathan Wilhite strained his hamstring two weeks ago against LSU.

With Irons, an All-SEC candidate, playing opposite Lee, South Carolina attacked the newcomer on nearly every play. And more times than not, when Lee walked to the line of scrimmage, he faced the daunting task of covering Sidney Rice, South Carolina's sensational wide receiver.

"We knew the play was going to Rice," Irons said. "I told Lee, 'They're going to line Rice up on you and try to jump over you. When they throw it your way, break it up.'"

Sure enough, South Carolina quarterback Syvelle Newton took the snap, made a quick three-step drop and lofted a jump ball to the left side of the end zone. Rice, a 6-foot-4 sophomore, who scored a school-record five touchdowns against Florida Atlantic last Saturday, jumped to make what would be the game-tying catch. But Lee and safety Eric Brock knocked away the football with 19 seconds left to give the Tigers a 24-17 win.

"I'm not a rocket scientist, but I could pretty much figure out it was going to No. 4 [Rice] or No. 11 [Kenny McKinley]," Tuberville said. "[Rice] is tall, and fortunately for us, we had our tallest cornerback on that side. It was a jump ball. It was a good play call for them, throwing it to the right guy, and for us we had the right guy covering."

Finally, the Tigers (5-0, 3-0 SEC) had preserved their undefeated season and stayed in line with No. 1 Ohio State and No. 3 Southern California as favorites to play in the Bowl Championship Series title game.

But Auburn's fifth victory was much tougher than expected against South Carolina (3-2, 1-2 SEC), which now has lost its last 20 games against top-five opponents, dating all the way back to 1981.

With Steve Spurrier standing on the opposite sideline, though, Tuberville knew the Gamecocks were capable of anything. And, in the final five minutes, it looked like Spurrier would find some way to pull off another improbable victory, with far lesser talent nonetheless.

"Auburn is a big, strong team," said Spurrier, who was seeking his 12th win over a top-five opponent. "Defensively, they chose to play a soft zone so we changed our game plan completely.

"The last play, they blitzed us. We probably should have run a slant. The kid covered [Rice] well and it didn't work out. I told the team we're not good enough to beat Auburn right now. Hopefully, some day we will be." 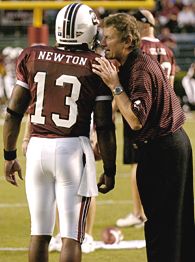 With three minutes left, it appeared South Carolina had made the play that would force overtime and would indeed have a chance to win. On first-and-5 from the Auburn 35, Newton pump-faked to the right side, and linebacker Will Herring bit on the bluff. With the Tigers blowing their pass coverage, redshirt freshman Jared Cook ran past three defenders. Newton lofted a perfect pass down the middle of the field. Cook ran under it and the football hit him in the hands at the goal line.

And he dropped it.

The Gamecocks still weren't done. On second down, Newton, who had moved back to quarterback from receiver only two weeks ago, scrambled for 11 yards and a first down. After throwing incomplete on first down, Newton forced a pass into double coverage and was nearly intercepted. Then he threw incomplete to Rice in the end zone on third down.

On fourth-and-10 from the Tigers' 24, Newton threw to the left side for Rice, who caught the pass and barely lunged past the first-down marker with 2:20 to play.

Then the Gamecocks moved to the Auburn 7-yard line on Newton's 7-yard completion to Chris Hail. But on second-and-3, Newton dropped back to pass and was sacked by defensive end Quentin Groves for an 8-yard loss. Newton threw a 10-yard pass to Rice on third down, but he was stopped 1 yard short of the first down, setting up the failed fourth-down play.

"We finally got him," Auburn defensive coordinator Will Muschamp said of Newton, who completed 21 of 35 passes for 240 yards and two touchdowns and ran 20 times for 44 yards.

"The quarterback was the one killing us. We had good coverage down the field and he was breaking out and running and making plays. I told him I wished we'd played them three weeks ago."

It seemed remarkable that South Carolina had a chance to tie the game at the end. After the Gamecocks scored a touchdown late in the first half to cut the Tigers' lead to 14-10, Auburn took the second-half kickoff.

The Tigers started the drive at their 7-yard line and kept the football for more than 8½ minutes. They ran eight times and threw eight passes. The Tigers converted two third-down plays and failed on their last one, forcing John Vaughn to kick a 24-yard field goal with 6:22 left in the third. 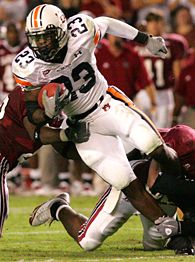 In film study earlier this week, the Tigers coaching staff noticed the outside man on the right side of Carolina's kickoff return team turned his back and ran toward the Gamecocks' end zone when the football was kicked.

So on the ensuing kickoff, senior Matt Clark pooched the ball to the right side. Auburn running back Tre Smith tried to catch the kick, but muffed it. Tigers cornerback Jerraud Powers recovered at the Auburn 48.

"The wind was blowing real hard in their face," Tuberville said. "Our kicker did a good job with it. It just worked. Sometimes they do. I could be sitting here explaining why it didn't if it didn't work. Good for television, but not very good for the heart."

After recovering the onside kick with 6:13 to go in the third, the Tigers kept the football the rest of the quarter. It took the Tigers 12 plays to drive to Carolina's 1-yard line, and tailback Kenny Irons dove for a touchdown on fourth-and-goal. Vaughn's extra-point kick put the Tigers ahead 24-10 with 14:52 left.

Irons, who played two seasons at South Carolina before transferring to Auburn, ran 27 times for 117 yards and two touchdowns.

"It was special," Irons said. "It's a great win and a great feeling."

It was the worst of times for Spurrier, especially during the third quarter, when his offense failed to run a single play. For Spurrier, who long ago earned the moniker Ol' Ball Coach while drawing up his ball plays at Florida, there could be nothing worse than playing 15 minutes of defense.

"The third quarter killed us," Spurrier said. "I'm going to stop talking about it. I don't know what we need to do. We may blitz the first five plays in the third quarter from now on and either stop them or let them score."