So Louisville's 44-34 victory over then-No. 3 West Virginia was too high-scoring for the Big East detractors. Too many points (78). Too many yards (1,008). Not enough defense.

How easily we forget the final score of last season's Rose Bowl, in which No. 2 Texas upset No. 1 USC 41-38 to win the national championship. The Longhorns and Trojans combined for more points (79) and yards (1,130) than the Mountaineers and Cardinals did last week.

But because Texas and USC aren't from the much-maligned Big East, the Rose Bowl was considered an instant classic.

And never mind that No. 2 Michigan just allowed 26 points to a Ball State team that scored seven against Central Michigan. Or that Texas allowed 518 yards and trailed 21-0 in its 35-31 win over unranked Texas Tech two weeks ago.

Instead of giving the Cardinals credit for crushing the third-ranked team in the country -- a win that is arguably as impressive as Ohio State at Texas or Michigan at Notre Dame -- much of the public focused on what Louisville didn't do: shut down one of the country's most explosive offenses. What did you expect? A shutout?

There hasn't been this much of a double standard in college football since the NCAA investigated rules violations at Tennessee.

"If it was a low-scoring game, they probably would have said there was no offense," West Virginia coach Rich Rodriguez said. "If it was a high-scoring game, they would say there's no defense. There's still a handful of people out there looking to pounce on the Big East. I think it's kind of crazy.  I think our league is still underrated, and I think other leagues are way overrated."

At least the Cardinals will get another chance to impress the BCS computers and poll voters Thursday night when they play at No. 15 Rutgers, the other 8-0 team in the Big East. The Scarlet Knights rank No. 2 nationally in total defense (227.38 yards per game) and pass defense (135.3 yards per game), and they've allowed only four touchdown passes in eight games, second fewest in Division I-A.

The Scarlet Knights haven't faced an offense as explosive as Louisville, and they've beaten only four I-A teams with winning records -- Ohio, South Florida, Navy and Pittsburgh. Rutgers won two other nonconference games against teams from BCS conferences: Illinois and North Carolina, which are a combined 3-16.

So even if Louisville wins convincingly at Rutgers Stadium, where 2,500 temporary seats have been added to accommodate an overflow crowd for what will be the biggest football game ever played in Piscataway, N.J., its victory might be dismissed just as easily.

"You just wonder what their agenda is," Louisville coach Bobby Petrino said of his team's critics. "Whose vote they're trying to influence. That's really all I want to say about it."

Louisville has won four road games, including victories at Kansas State and Syracuse, but it undoubtedly is walking into the most hostile setting it has faced this season. It is the first time in Rutgers football history -- all 137 years, to be exact -- that a ranked Scarlet Knights team will play a ranked opponent.

"We've got a lot of young players who haven't been in this atmosphere before," Rutgers coach Greg Schiano said. "I just kind of gave them a heads-up that they'd never been in a game like this before. Usually, there will be a lot of recruits on the sideline before the game and things like that, but it cleans up pretty quickly. This one is not going to clean up quite as much."

The Cardinals defense will face another stout running attack. West Virginia quarterback Pat White ran for 125 yards and four touchdowns against Louisville; tailback Steve Slaton had 156 yards and one touchdown, despite missing part of the second half with a hand injury.

"We've played really good defensively all year," Petrino said. "That's one of the reasons we're where we're at. We played against two of the best players in the country. Our defense kept us in the game."

The Cardinals will face two more of the country's best players Thursday night. Scarlet Knights tailback Ray Rice ranks third in the country in rushing with 150.4 yards per game. Senior fullback Brian Leonard, who ran for 700 or more yards in each of his first three seasons, has carried only 52 times for 244 yards and two touchdowns this year. But he's a bruising blocker for Rice and catches the football out of the backfield as well as any player in college football.

"It's tough preparing for Leonard and Rice," Petrino said. "Leonard can do so many things -- catch the ball out of the backfield, run it and lead block for Rice. Rice has a combination a lot of people don't have -- the power and the quickness. Certainly, the power and the ability to go all the way with Rice is something that concerns us."

What doesn't concern Petrino at the moment is the BCS mess. The Cardinals are third in the BCS rankings, behind No. 1 Ohio State and No. 2 Michigan, and have a surprisingly sizable lead over No. 4 Florida.

But Louisville still plays three teams with winning records -- at Rutgers, at home against South Florida and at Pittsburgh -- before the Dec. 2 finale against Connecticut.

"All of our preparation and focus is for Rutgers," Petrino said. "If we look past that, we're going to get beat."

On (and off) the Mark
On the Mark 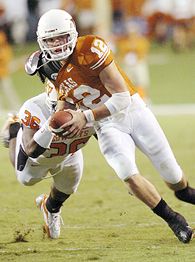 This was supposed to be the season Big 12 offenses took their lumps because of a shortage of experienced quarterbacks. Texas lost Vince Young. Missouri lost Brad Smith. Rhett Bomar was kicked off the team at Oklahoma.

But seven Big 12 quarterbacks are ranked in the top 33 nationally in pass efficiency, led by Texas redshirt freshman Colt McCoy, who is second with a 172.1 passer rating.

"The big question marks early in the season were quarterbacks," Texas coach Mack Brown said. "But every time you turn on the film, you see somebody playing well. That bodes well for the conference in the future."

Perhaps no Big 12 quarterback has as bright a future as McCoy, who has thrown 27 touchdowns, breaking the Longhorns' single-season record shared by Young (2005) and Chris Simms (2002). McCoy is only two touchdown passes shy of the NCAA freshman record of 29, set by Nevada's David Neill in 1998.

"He's a superstar," cornerback Aaron Ross said. "I tell him that every day."

Taylor has thrown 20 touchdown passes, tying the Cornhuskers' 30-year-old record set by Vince Ferragamo. Thompson has been more than efficient, leading the Sooners to a 7-2 record and putting them into position for a berth in the Cotton Bowl, despite playing the last three games without star tailback Adrian Peterson.

Another Big 12 quarterback not to be ignored: Kansas State freshman Josh Freeman, who has helped guide the Wildcats to an unexpected 6-4 record, making rookie coach Ron Prince's first team bowl-eligible.

Off the Mark
Georgia, the defending SEC champion, was expected to struggle this season with a new quarterback. But no one in Bulldogs Nation could have guessed Georgia would lose to Vanderbilt and Kentucky in the same season, the first time that's happened since 1973.

The Bulldogs have lost four of five games since blowing a 24-7 lead in a 51-33 loss to Tennessee on Oct. 7. With freshman quarterback Matthew Stafford running the offense, Georgia has committed 19 turnovers in five games, leading to 59 points scored by opponents.

Stafford, a highly regarded prospect from Highland Park, Texas, has thrown eight interceptions and lost a fumble in the past three games. The blame isn't his alone, though. Georgia's receivers have grossly underachieved again, and the offensive line hasn't played particularly well. The defense allowed Vanderbilt and Kentucky to convert long scoring drives late in the fourth quarter to win.

There was a time when Georgia Tech shouldn't beat Georgia, either. That time appears to be over, too (we'll find out for sure on Nov. 25 when the teams meet).

Unless you're an Alabama fan, you had to be tickled to death for Mississippi State coach Sylvester Croom. The first African-American football coach in SEC history, Croom upset his alma mater, Alabama, with a 24-16 win in Tuscaloosa on Saturday.

Three years ago, Alabama passed over Croom, who grew up in Tuscaloosa and played for Bear Bryant, and hired former Tide quarterback Mike Shula as its football coach.

The Bulldogs have won only three games this season and nine during Croom's two-plus seasons in Starkville, but the last one was definitely one to savor. Mississippi State ended a 23-game losing streak in SEC road games and won for the first time in 19 games against West Division teams.

According to The Birmingham News, Croom delivered the win after talking to Dallas Cowboys coach Bill Parcells for an hour Friday. Croom read a newspaper article about Parcells earlier in the week and was impressed with his message.

"He talked about game winners and game quitters," Croom told the News. "It's the most profound thing I've ever read."

Off the Mark
Mississippi State's upset win sure didn't help Shula's popularity at Alabama. The son of former Miami Dolphins coach Don Shula is 26-21 in three-plus seasons, including 13-17 in SEC games. Worse, Shula's teams are a combined 0-6 against LSU and Auburn, the Crimson Tide's next two opponents. Alabama has beaten rival Tennessee only once in four tries.

Like Richt, Shula continues to call his own offensive plays. The Crimson Tide went 0-for-4 in the red zone against Mississippi State and rank eighth in the SEC in total offense with only 21 touchdowns, third fewest in the league.

Shula's job isn't in trouble yet, but ugly losses to LSU and Auburn might put it in jeopardy.

On the Mark
How about a pair of Colts at next month's Heisman Trophy presentation in New York? Along with the hot Texas quarterback, Hawaii's Colt Brennan has positioned himself for serious consideration. He completed 18 of 28 passes for 413 yards and six touchdowns in three quarters of a 63-10 win over Utah State on Saturday.

Brennan, a junior from Irvine, Calif., has broken Hawaii's single-season record with 39 touchdown passes, surpassing the previous mark of 38 set by Timmy Chang. Brennan needs 15 more touchdowns in his last four games and the Hawaii Bowl to tie the NCAA single-season record of 54 set by Houston's David Klingler in 1990.