PISCATAWAY, N.J. -- Painted on the red brick wall in the north end zone of Rutgers Stadium are the words: "The Birthplace of College Football." The Scarlet Knights were a part of the first college football game played more than 137 years ago, a 6-4 win over Princeton in 1869, and they really hadn't played a game as important as that one since.

Between then and now, history had essentially ceased when it came to Rutgers football. The Scarlet Knights have played in two bowl games and were largely considered one of the worst teams in the country. For longer than anyone in the New York metropolitan area can remember, Rutgers set the standard for football futility, going 0-11 in 1997, 1-10 in 1999 and 1-11 as recently as 2002.

"I can remember being a laughingstock at 1-11," senior fullback Brian Leonard said. "I can remember getting booed off the field and getting my car smashed with a beer bottle. I remember when that was happening."

Those days now seem long ago.

Especially after the No. 15 Scarlet Knights stunned No. 3 Louisville 28-25 on Thursday night in front of a sellout crowd of 44,111, the largest to ever watch Rutgers play at home. And during the wild celebration on the artificial turf that continued well after junior Jeremy "The Judge" Ito drilled a 28-yard field goal with 13 seconds left to cap an improbable 18-point comeback -- on his second try nonetheless -- they might as well have painted a few more words in the opposite end zone. 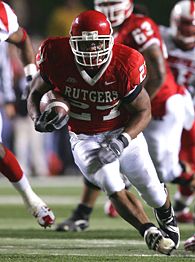 Rutgers' upset of Louisville threw a Texas-sized wrench into the Bowl Championship Series, the system that determines which two teams will play for the sport's national championship on Jan. 8 in Glendale, Ariz. And it set up a mad dash to the finish line of the regular season.

"This is the way college football is supposed to be," Rutgers coach Greg Schiano said. "The metropolitan area maybe hasn't had this before, but I have a feeling they're really going to take to it."

The Scarlet Knights, who hadn't played in a bowl game since 1978 before last year and have never been in first place in the Big East Conference standings this late in the season, are one of four unbeaten teams left in Division I-A. Two of the undefeated teams, No. 1 Ohio State and No. 2 Michigan, play in Columbus, Ohio, on Nov. 18. No. 14 Boise State is the third, but isn't considered a contender for the national title because it plays in the Western Athletic Conference, a non-BCS member.

The Cardinals, who lost for the first time in nine games this season, were supposed to be the team that faced the winner of next week's Big Ten Conference showdown. After dismantling then-No. 3 West Virginia 44-34 a week ago, Louisville took the Mountaineers' lofty perch at No. 3 in the BCS standings. The Scarlet Knights were No. 13 in the BCS standings, behind eight one-loss teams and LSU, which has lost twice.

But after Rutgers rallied from a 25-7 deficit in the second quarter, they're jumping for joy in places such as Gainesville, Fla., Austin, Texas, Auburn, Ala., and Berkeley, Calif. And three weeks from now, with college football's championship format possibly going haywire like never before, they'll be screaming bloody murder in all but two of those college towns with stakes in the title race.

And Piscataway, N.J., is the most unlikely of places to have a horse in the race.

The Scarlet Knights slammed the door on the Cardinals, who looked like they'd blow Rutgers off the field in the first half. Quarterback Brian Brohm threw a 45-yard pass to Harry Douglas on Louisville's first play for scrimmage, setting up freshman Anthony Allen's 2-yard touchdown run for a 7-0 lead. Rutgers answered on Mike Teel's 26-yard touchdown to Tiquan Underwood, but then Louisville's JaJuan Spillman ran back the kickoff 100 yards for a touchdown.

The Scarlet Knights blocked the extra-point kick try, but the football never crossed the line of scrimmage. Allen scooped it up and ran into the end zone for a two-point conversion and a 15-7 lead.

The Cardinals made it 22-7 on their next possession with Brohm's five-yard touchdown pass to Jimmy Riley, and then Art Carmody added a 39-yard field goal midway through the second quarter.

"You don't come back like we did tonight unless you're believers," said Schiano, who lost 32 of his first 41 games at the school. "I'm really proud of our players and kids. They displayed great courage and really displayed what we believe in around here -- chopping away and doing what we do." 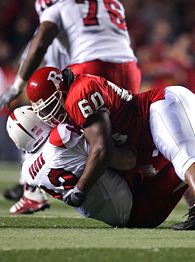 After cutting Louisville's lead to 25-14 at halftime on Ray Rice's 18-yard touchdown run, the Scarlet Knights started chopping down Brohm and running the ball, which what they've done as well as anyone this season.

Schiano, who also serves as his team's defensive coordinator, started bringing more blitzes to hurry Brohm and force him out of the pocket. The plan worked nearly flawlessly, as Louisville had only 20 yards on its first five possessions of the second half. In fact, after Carmody's field goal midway through the second quarter, the Cardinals punted on each of their next seven possessions. Their last drive -- and the game -- ended when Brohm was sacked for the fifth time.

Brohm completed only 13 of 27 passes for 161 yards with one touchdown and one interception.

"It's a tough loss for us," Louisville coach Bobby Petrino said. "I felt like we were in good shape at halftime and we came out in the second half and didn't move the ball offensively. We weren't able to generate anything, running the ball or throwing it. I thought Rutgers did a nice job of pressuring the quarterback. We had a couple of things that were there and we just didn't make the plays. They outplayed us."

The Scarlet Knights began chopping away at the score midway through the third quarter. Teel threw a 67-yard pass to freshman receiver Kenny Britt, who fumbled as he was tackled from behind by cornerback William Gay. But Britt recovered his fumble at the Louisville 4. On the next play, Rice ran for a four-yard touchdown, and Dennis Campbell caught a pass for a two-point conversion, trimming the Cardinals' lead to 25-22 with 4:42 to play in the third. 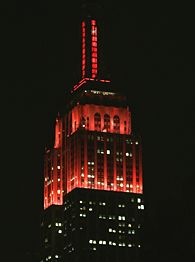 Rice, who ran 22 times for 131 yards and scored two touchdowns, really started to wear down Louisville's defense in the fourth quarter. On Rutgers' first drive of the last quarter, he had runs of 10 and 16 yards for first downs. He gained 33 yards in that drive, helping set up Ito's 46-yard field goal that tied the score at 25-25 with 10:13 left.

With the score tied, Rutgers got the football back with 5:28 to play. The Scarlet Knights picked up a pair of first downs, then faced third and 6 at their 35. Teel threw into the right flat for Leonard, who ran 26 yards to the Louisville 39 with just over two minutes to go. Rice carried three consecutive times to move closer for Ito's field goal try.

Afterward, when Schiano was asked if everything on Thursday night-- the school's first victory over a top-five opponent, the unbelievable atmosphere (they even lighted the Empire State Building in New York Scarlet red as a tribute to the team) and the possibility of playing in a lucrative BCS bowl -- was what he imagined Rutgers could be, Schiano shook his head.

"Everything is some day we'll get to be the best," Schiano said. "But this sure is a step in the right direction. That atmosphere out there ... you knew it would happen, but you just didn't know when."

It only took 137 years for it to happen.