Rutgers coach Greg Schiano, a former Hurricanes defensive coordinator, has been targeted by several of Miami's influential boosters as the top choice to replace deposed coach Larry Coker, a school official, who spoke on the condition of anonymity, said Thursday.

However, it is unclear whether Schiano has any interest in leaving the Scarlet Knights, who have emerged as a contender in the Big East Conference and were ranked among the top 10 teams nationally this season. Schiano is an attractive choice for Miami because he and his coaching staff heavily recruit Florida high schools.

Three candidates who have been mentioned among possible replacements at Miami have indicated they're not interested in the job. South Carolina coach Steve Spurrier, who won a national championship at Florida, said this week that he has no interest in other jobs. Auburn coach Tommy Tuberville, a former Miami assistant, told ESPN.com Tuesday night that he has no interest in returning to the Hurricanes.

And Georgia coach Mark Richt, a former Miami quarterback, said he wasn't interested in returning to coach his alma mater, and the hefty buyout in his contract with the Bulldogs would probably preclude the Hurricanes from hiring him anyway. 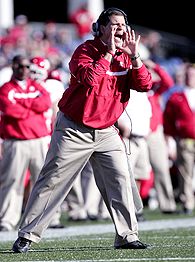 If the Hurricanes can't lure a high-profile coach to replace Coker -- Tulsa's Steve Kragthorpe and Wisconsin athletics director Barry Alvarez have also been mentioned as possible replacements -- there is a possibility that current Miami defensive coordinator Randy Shannon would be considered.

Shannon, a Miami native, is recognized as one of the country's best defensive coordinators and his unit was perhaps the lone bright spot on the team this season. The Hurricanes were ranked eighth nationally in total defense before Thursday night's game against Boston College and they limited the Eagles to only 193 yards offense.

Shannon, 40, was a starting linebacker on Miami's 1987 national championship team and has worked as an assistant at his alma mater since 1991, including the last six seasons as defensive coordinator.

But because Coker was elevated from offensive coordinator to head coach when Butch Davis left for the Cleveland Browns after the 2000 season, Miami might be hesitant to give Shannon the job this time.

Shannon also is believed to be a candidate to replace Florida International coach Don Strock, who resigned Nov. 15. The Golden Panthers, one of only two winless Division I-A teams this season, were involved in an ugly melee with the Hurricanes in Miami's 35-0 win on Oct. 14.