ATLANTA -- Michigan had its chance against Ohio State and lost. Southern California couldn't even beat its struggling rival on Saturday, so the Trojans won't get an opportunity to play the No. 1 Buckeyes more than a month from now. 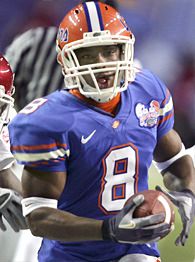 Florida is next in line, and after beating Arkansas 38-28 in Saturday night's SEC championship game at the Georgia Dome, the Gators deserve the opportunity to play Ohio State in the Jan. 8 BCS title game in Glendale, Ariz.

Florida finished 12-1 against one of the country's toughest schedules, won its first SEC title since 2000 and lost one game in a conference that is still regarded the sport's toughest from top to bottom.

"We certainly do," Florida coach Urban Meyer said when asked Saturday night whether he believes the Gators should get a chance to play Ohio State. "Florida belongs. The other team had a shot. We went 12-1, and I think the country wants to see the Southeastern Conference champion against the Big 10 champion. I think that's what this is all about."

But because of college football's inept system of determining which two teams will play for the national championship, voters around the country will decide Sunday whether the Gators or Wolverines will play the Buckeyes in the Arizona desert.

The Gators entered the last Saturday of the regular season fourth in the BCS standings, behind the Buckeyes, No. 2 USC and No. 3 Michigan. And when the Trojans were stunned by unranked UCLA 13-9 around halftime of the SEC championship game, Florida's players realized the magnitude of the opportunity in front of them.

"It was firing through the locker room pretty quick," Meyer said.

Maybe knowing that one more victory could possibly send them to the national championship game was too much of a shock for the Gators. Because in the third quarter, they quickly blew a 17-7 lead and fell behind 21-17, after the Razorbacks intercepted two Chris Leak passes, the second returned by defensive end Antwain Robinson for a 40-yard touchdown.

But the Gators quickly regrouped, with sprinter Percy Harvin scoring on a 67-yard touchdown run to put Florida ahead 24-21. He had 167 yards of total offense and scored two touchdowns, becoming the second freshman named MVP of the SEC championship game. The Gators scored another touchdown in the fourth quarter on receiver Andre Caldwell's 5-yard touchdown pass to tight end Tate Casey, which added style points to the victory, if nothing else.

"I'm not sure about style points," Meyer said. "With the schedule we play, we just have to find a way to win the game."

With the Gators winning another game -- their sixth in a row -- college football is again destined for a championship controversy. Florida is expected to narrow its gap or even surpass Michigan in the six computer rankings used in the BCS formula. So the Gators' fate might be decided by the 114 former players, coaches, administrators and media members who vote in the Harris Interactive Poll, as well as the 63 current coaches who vote in the USA Today coaches' poll.

"There are a lot of people making a lot of decisions out there, but this is a big one," Meyer said. "We're going to tell a group of young men, who just went 12-1 in a most difficult schedule against six ranked opponents, that they don't have a chance to play for a national championship? I'm going to need help with that one." 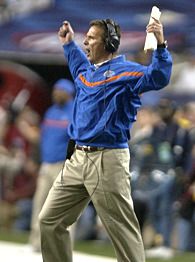 So are those voters (fortunately, I'm not one of them). So here are the cold, hard facts when comparing the Gators and Wolverines:

4. Michigan's best win is considered a 27-13 victory over Wisconsin on Sept. 23. The Badgers are 11-1 and have climbed to No. 7 in the AP Top 25 poll, despite having played only one ranked opponent -- the Wolverines -- the entire season.

5. The 12 teams Florida defeated finished the season with 11 combined wins against opponents which were ranked in the AP Top 25 poll at the time the game was played. The opponents Michigan defeated claim just three wins against ranked teams (Notre Dame beat Penn State. Indiana beat Iowa. Vanderbilt beat Georgia. The Nittany Lions, Hawkeyes and Bulldogs, it should be noted, haven't been ranked in seven weeks).

6. The Gators went 3-1 against ranked opponents, beating then-No. 13 Tennessee, No. 9 LSU and No. 8 Arkansas and losing at No. 11 Auburn. The Wolverines went 1-1 against ranked opponents, beating a highly overrated No. 2 Notre Dame team (that lost to Michigan and USC by a combined total of 46 points) and losing at No. 1 Ohio State 42-39 on Nov. 18.

9. Since the Wolverines last played and lost at Ohio State, the Gators won at Florida State (The Seminoles are 6-6, but rivalry games are tough to win. Just ask USC coach Pete Carroll) and then beat the No. 8 Razorbacks, who defeated then-No. 2 Auburn and No. 13 Tennessee by 17 points each.

10. Michigan didn't win the Big Ten; Florida won the SEC. Winning your conference should be a prerequisite for playing in the national championship.

Arkansas coach Houston Nutt said the Gators should get the chance to play Ohio State.

"This is the toughest conference in America," Nutt said. "I really wish everybody had the opportunity to go to Auburn, to go to Florida, to go to Arkansas, to go to LSU or let us come to their place. You do that and play that schedule. It's a hard schedule, really hard. It's hard to get to this game. I just feel like it's absolutely one of the most difficult things to do, to have one in loss in this league."

Two years ago, Auburn did better than that, becoming only the sixth team in 20 seasons to finish unbeaten and untied in the SEC. But the Tigers were left out of the national championship game. USC blasted Oklahoma 55-19 in the Orange Bowl to win its second consecutive national title, and Auburn settled for a 16-13 win over Virginia Tech in the Sugar Bowl and finished No. 2 in the country.

SEC commissioner Mike Slive, who also serves as the BCS coordinator, said Saturday night that he'd be upset if the SEC champion was left out again.

"As the SEC commissioner, I'd be disappointed," Slive said.

Slive said he isn't sure whether voters will want to see a Big 10 rematch in the BCS title game. But since there aren't rules preventing a Michigan-Ohio State sequel, Slive said it can't be easily dismissed.

"That's a good question," Slive said of a potential rematch. "The idea is that the polls and BCS standings create the 1-2 matchup. There are no exceptions in that process. It seems to me the voters will have to decide, but the rules don't say there can't be a rematch."

Meyer remains confident voters will ensure a Big 10 rematch doesn't happen, even with his Gators sitting behind the Wolverines in the BCS standings.

"I have great confidence that the University of Florida is going to get that opportunity," Meyer said. "I really do."