When Hawaii quarterback Colt Brennan remembers the fateful night of Jan. 28, 2004, and the public shame and seven days in jail that followed it, he wonders where he'd be today if he hadn't entered a University of Colorado coed's dorm room uninvited. 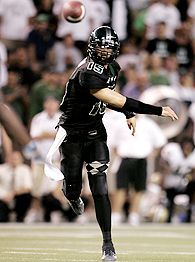 Brennan, 23, takes nothing for granted anymore, even as his current circumstance makes it so inviting. The junior is on the verge of completing the greatest statistical season of any NCAA quarterback. He needs 10 passing yards against Arizona State in the Sheraton Hawai'i Bowl on Christmas Eve (ESPN, 8 p.m. ET) to become the third college player to throw for 5,000 yards and 50 touchdowns in a season. Brennan also needs one touchdown pass to tie the NCAA single-season record of 54 set by Houston's David Klingler in 1990.

"When I left Colorado, I had a chip on my shoulder," Brennan said. "A lot of things happened to me that shouldn't have happened. So I knew something good was going to happen at Hawaii."

Nearly three years ago, Brennan was a freshman quarterback at Colorado when a female student said he entered her room uninvited, exposed himself and fondled her. He was charged with several crimes, including sexual assault. Colorado, which was in the midst of a firestorm surrounding allegations of sex crimes by several football players, quickly dismissed Brennan from the team.

A jury found Brennan guilty of second-degree burglary and first-degree trespassing. A more severe charge of unlawful sexual conduct was vacated for lack of evidence. Brennan, who admits he was intoxicated on the night in question and doesn't remember many details, was sentenced to seven days in jail and four years of probation.

"You wouldn't wish that experience on anyone," said Terry Brennan, the quarterback's father. "It takes a life of its own and you do what you can. Unfortunately, when everything was said and done, the district attorneys felt there were these charges of trespassing and burglary."

Brennan grew up outside Los Angeles and was a backup to quarterback Matt Leinart for three seasons at Mater Dei High in Santa Ana, Calif. After Brennan was kicked off the Colorado team, he transferred to Saddleback Community College in Mission Viejo, Calif. He played one season there and played well enough to draw the attention of several recruiters. But when Brennan was convicted and sentenced to jail time, most schools quit recruiting him.

Hawaii coach June Jones offered him a chance to join the Warriors, but with this caveat: Brennan would initially have to pay his own way as a walk-on and stay out of trouble. In return, Jones promised Brennan he would mold him into an NFL quarterback.

"We had a lot of things going on here with premium ticket prices and things like that," Jones said. "I didn't want the headlines to be about us bringing in a prisoner, basically."

San Jose State was the only school that offered Brennan a scholarship. Syracuse coach Greg Robinson recruited him and initially offered a scholarship. But on the day the Syracuse paperwork arrived via courier at Brennan's home, Robinson called to tell him the school's president wouldn't allow it.

So Jones made one last push, trying to persuade Brennan to join the Rainbows as a walk-on. 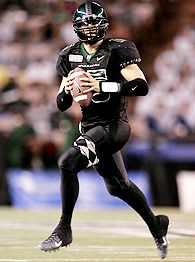 "You can go to Syracuse and you might get drafted. You can go to San Jose State and you might get drafted," Jones told Brennan. "But if you make the sacrifice and come to Hawaii, I'll take care of you eventually and you'll be one of the first quarterbacks drafted. If you don't realize the opportunity, you're not the man I thought you were, and I don't want you here."

Brennan enrolled at Hawaii shortly after the 2004 season ended. He started 10 of 12 games for Hawaii in 2005, after replacing record-setting quarterback Timmy Chang, and led the country in total offense and touchdown passes while playing in Jones' pass-happy, spread offense.

Off the field, Brennan flourished in the more relaxed island lifestyle. He remains on probation for his Colorado conviction and can't consume alcohol or illegal drugs.

"It just slowed everything down for me," Brennan said. "They focus on just enjoying things and being happy. Where I grew up in Southern California, everybody was worried about being the 'man' and having the nice car and all the cash and the girls. Out there, it's all about who's the coolest guy and being laid-back. It's all about what type of person you are and what kind of character you have."

But living in a tropical paradise, more than 2,300 miles from the U.S. mainland no less, has its disadvantages. Brennan has traveled home to California only twice in the last two years  at Christmas a year ago and for one week last May. His father attended all of his son's games on the mainland this season and spent a month in Hawaii to watch four home games.

"I'm a real big fan of Hawaii, just relaxing on the beach and not letting life get too fast. You get caught up in it really fast. The days really slow down and you just enjoy it."
-- Colt Brennan

Traveling from island to island also is difficult. The Hawaii campus is in Honolulu on the island of Oahu, home to the world-famous beaches. Brennan's girlfriend, Shakti Stream, teaches elementary school on the Big Island of Hawaii and lives with her parents in the countryside. Their home didn't have indoor plumbing until a few years ago and still doesn't have electricity, Brennan said. They use four solar panels to generate power for lamps. Brennan has to fly on a plane to visit his girlfriend when he can.

"It's a cultural shock," Brennan said. "They can spot an [outsider] about a mile away. It's just the way you act. They have a way about their culture and you've got to respect it. I'm a real big fan of Hawaii, just relaxing on the beach and not letting life get too fast. You get caught up in it really fast. The days really slow down and you just enjoy it."

That's why Brennan says he will probably return for his senior season at Hawaii. He will submit his name to the NFL's underclassman advisory committee to gauge where pro scouts and personnel directors project he'd be selected in April's draft. If Brennan isn't considered a potential first-round choice, he'll probably be back at Hawaii next year.

"He's going to have to show people that he's not a system quarterback," Mel Kiper, an NFL draft analyst for ESPN, wrote in a chat on ESPN.com earlier this week. "I think another year would benefit him."

Brennan has flourished in Jones' system. He leads Division I-A in total offense (410.8 yards per game), pass efficiency (182.8 rating), touchdown passes (53), passing yards (4,990) and completion percentage (72.1). He finished sixth in Heisman Trophy voting and was named third-team All-American by the Associated Press. Brennan won the Sammy Baugh Trophy, given to the country's top passer by the Touchdown Club of Columbus, which, ironically, is home to Ohio State quarterback Troy Smith, the Heisman Trophy winner.

And Brennan has already been through so much, on and off the field.

"I've got this perspective on life now," Brennan said. "It's like you got the wind knocked out of you and you got back up. The people out there, especially if you're representing Hawaii, they take a lot of pride in that. The people out there are so good to me, I'd never want to leave. It's really given me a safe haven."