Editor's note: ESPN.com asked five of its analysts to discuss one change they would like to see in college football. Here is the second installment of the five-part series.

That was the controversial firestorm that engulfed college football for more than a week after the Gators beat Arkansas 38-28 in the SEC championship game in Atlanta's Georgia Dome on Dec. 2.

Wolverines fans argued their team was more deserving because it had fought No. 1 Ohio State to the bitter end of a 42-39 loss on Nov. 18, a game that was prematurely dubbed "The Game of the Century" during the regular season. 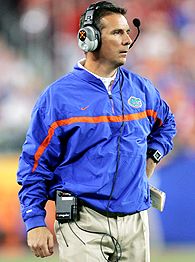 Florida coach Urban Meyer lobbied his team played a tougher schedule in the sport's most difficult conference and was more deserving because the Gators actually won their league championship. Meyer argued the Wolverines had their chance against the Buckeyes and even though the outcome was close, another team deserved an opportunity at beating Ohio State.

In the end, Meyer proved to be right. Michigan lost to No. 4 Southern California 32-18 in the Rose Bowl presented by Citi. And the Gators, despite being overwhelming underdogs, blasted the top-ranked Buckeyes 41-14 in the BCS title game to win the school's second national championship.

One significant rules change in the way college football determines its national championship would prevent such arguments in the future.

While I'm among those media members who favor a playoff system in the sport -- a change that won't come anytime in the foreseeable future -- turning conference play into a playoff is the next best thing.

In the future, only conference champions should be allowed to play for the BCS title. That would have prevented the Ohio State-Michigan loser from being included in the BCS discussion this past season, and thus would have eliminated the ugly debate that preceeded the BCS title game.

University presidents and other key figures in charge of college football are reluctant to install a playoff system because, among other reasons, they say it would lessen the importance of the regular season.

College football's 14-week regular season is already the most important in all of sports. In college basketball, teams can struggle during their nonconference schedule in November and December, then rally during conference play to earn a spot in the NCAA tournament.

In professional sports, the regular season means even less. NFL teams can stagger early in the 16-game schedule, but rebound and claim a wild-card spot in the playoffs.
Seemingly half of the teams in the NBA and NHL qualify for the playoffs, and Major League Baseball teams have 162 games to right the ship.