When Florida honored its national champion football team at halftime of a men's basketball game last month, freshman quarterback Tim Tebow grabbed the microphone and told the sold-out crowd at the O'Connell Center that the Gators "still had a lot to come."

Many coaches might have cringed at the quarterback's suggestion that Florida's future might be even brighter -- a proclamation made only hours after the Gators blasted previously unbeaten Ohio State 41-14 in the BCS title game to win the school's second national championship in football.

But only minutes before the football team took the basketball court to be honored, Florida coach Urban Meyer suggested Tebow tell the crowd that more victories were on the way. Tebow didn't think Meyer was putting him on the spot; the quarterback saw it as a sign of confidence from his coach. 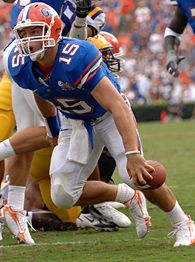 "Coach Meyer put me up to it," Tebow said this week. "He just wanted me to mention that we've got a lot of talented young guys and hopefully the future looked bright."

Tebow, the former prep All-American from Jacksonville, Fla., played a larger than expected role while backing up senior Chris Leak during the 2006 season. The freshman played in all 14 games, completing 22 of 33 passes for 358 yards with five touchdowns and one interception. He also was Florida's second-leading rusher with 89 carries for 469 yards and eight touchdowns.

"I think I grew a lot and had a lot of opportunities to grow being around a lot of older guys who had a lot of experience," Tebow said. "As far as maturity and leadership, I've done my best to try to pick that up as much as possible from the older guys, and I'm trying to take that leadership role myself now."

The Gators will need Tebow's leadership as they try to defend their national championship in 2007. Leak, a four-year starter and the school's career leader in passing attempts, completions and yards, is one of six departing starters on offense.

The losses on Florida's defense, which ranked sixth nationally in both scoring and total defense last season, are even more severe. Four starters were seniors and four juniors decided to forego their final season of eligibility and entered the NFL draft.

And Tebow will have to continue to grow as a passer when the Gators begin spring practice March 21.
Although he had a passer rating last season of more than 200 -- a mark that would have easily led the country if the freshman had attempted the required 15 passes per game -- Tebow spent most of his snaps running quarterback draws and option plays.

Otherwise, Tebow had limited opportunities to throw the football.

"I'm going to work my hardest to become a pocket passer and not just an athlete running around," Tebow said. "I want to be a complete quarterback who gets rid of the ball quickly and gets it into the right guy's hands. I've been working hard to improve my decision making. There are always a lot of things you can work on, like knowing exactly where you're going with the ball before the ball is snapped and knowing what the defense is going to do when you walk to the line."

More than anything, Meyer said, Tebow needs to get rid of the football more quickly, which requires a better understanding of the offense and how to recognize defenses.

Meyer said he and offensive coordinator Dan Mullen will adjust the offense to fit Tebow's strengths. Tebow is faster and more elusive than Leak, who was a traditional pocket passer and ran for only 30 yards last season.

"I think [Tebow] is very similar to Alex Smith," Meyer said, the day after the BCS title game. "I'm hoping we can do the same things. I expect us to be a little bit more option, more quarterback run. A lot of that depends on who our backup is, because you can't jeopardize running him as much as he likes to run and as much as we'd like to have him run. I think it will be a little more spread like we ran at Utah."

Tebow's backup will be one of three new quarterbacks. Bryan Waggener, a junior college transfer from Citrus College in California, and freshman Cameron Newton of Westlake High in Atlanta already have enrolled in classes at Florida and will participate in spring practice. John Brantley, the Gatorade National Player of the Year from Trinity Catholic in Ocala, Fla., will join the team this summer.

With more than six months left before the Sept. 1 opener against Western Kentucky, Tebow is anxious to see what the future holds.

And with Tebow under center, Meyer doesn't expect Florida's fortunes on the field to change much, either.