Louisville quarterback Brian Brohm's coach had just bolted for the NFL, and all indications were Brohm would be a first-round draft pick if he chose to turn pro as well. After Brohm won the Big East title and beat Wake Forest in the Orange Bowl, why would he choose to come back to play for a new coach and in a new offense for his senior season? 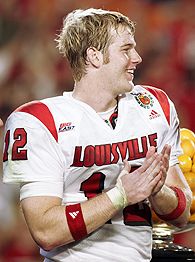 With Brohm's return for his senior season, Louisville will indeed be a national championship contender in 2007. The defending Big East champions should return seven starters on offense and five on defense.

The Cardinals should have more than enough offensive firepower to keep pace with West Virginia and Rutgers in the Big East, which proved to be much more rugged than expected in 2006. And if several key pieces on defense are replaced, such as defensive tackle Amobi Okoye and three starters in the secondary, Louisville again should be in contention to play in the BCS title game.

"We were a field goal away from playing for the title last season," Brohm said of Louisville's 28-25 loss at Rutgers on Nov. 9, the Cardinals' only loss in 2006. "We had one bad game offensively. Hopefully, next year we won't have that game."

New Louisville coach Steve Kragthorpe, who led Tulsa to three bowl games in four seasons after inheriting a program that had lost 21 of its previous 22 games, had a difficult time convincing Brohm to stay. Even before former Louisville coach Bobby Petrino was named coach of the Atlanta Falcons, Brohm was mulling an early departure to the NFL.

Kragthorpe persuaded Brohm to stay by convincing the quarterback that change and uncertainty would help him in the long run.

"If you're going to be a guy that's going to have a long career in the NFL, you've got to show you can adjust to change," Kragthorpe told Brohm. "It's an industry of change and the best players show they can adapt to new coaches and new systems."

"I think the biggest thing is just learning a new set of verbiage," Kragthorpe said. "It will be a little bit different for him. But you know, football is football. The only place where it's different is in Canada, because you have 12 players up there. We will do some things differently."

Brohm said he expects Louisville to put more emphasis on throwing to its tight ends and running backs. Other than that, Brohm doesn't expect the passing game to change much. He completed 63.6 percent of his passes for 3,049 yards with 16 touchdowns and five interceptions in 2006.

"What really sealed the deal was getting on the same page with the new coach, and I really liked what was being said," Brohm said. "The offense is going to be a blend of what we've run here in the past and what he's run in the past. It's going to be a similar pro-style offense, but we're going to have some more quick screens and quick passes and throw to the tight ends and backs a little more. Basically, it's the same type of offense we've been running."

The Cardinals will lose leading rusher Kolby Smith and Michael Bush, a 2006 preseason Heisman Trophy candidate, who broke his right leg in two places during the third quarter of the season-opener against Kentucky. Bush decided to enter the NFL draft rather than request a medical redshirt season in 2007. Freshman Anthony Allen, who ran for 406 yards and 13 touchdowns last season, figures to do most of the running this season.

Top pass catchers Harry Douglas and Mario Urrutia, who combined for more than 125 catches and 2,000 receiving yards in 2006, also are back. The right side of the offensive line must be rebuilt.

"Most people are backing off and moving us down in the rankings because Coach Petrino left," Brohm said. "There's uncertainty with what's going to happen with the program and what kind of offense we're going to be running. But we have a lot of talent here, and Coach Kragthorpe has everyone believing in his system and what he's doing. I don't think there will be a big drop-off or learning curve."

Brohm also wants to prove to NFL scouts that he can stay healthy. As a sophomore, Brohm missed Louisville's final regular-season game and its 35-24 loss to Virginia Tech in the Gator Bowl with a knee injury. He missed two games last season because of a thumb injury.

Regardless of what happens in 2007, Kragthorpe believes his new quarterback made the right choice in returning to school.