A year ago, when quarterback Matthew Stafford should have been preparing for his senior prom at Highland Park High School in Dallas, he was trying to navigate his way through Georgia's playbook and mat drills, the team's rigorous offseason conditioning program.

"It was tough coming in here within a month and a half of leaving high school," Stafford, who graduated high school early, said. "It was hard going right out and competing on the field."

It was much more difficult for Stafford when the Bulldogs actually started playing games last season. The former prep All-American, who as a senior led Highland Park to its first Texas state football championship in 48 years, couldn't lead Georgia to victories over Vanderbilt and Kentucky in 2006. 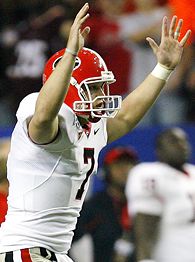 After replacing injured starter Joe Tereshinski III in the Bulldogs' second game, Stafford won his first two college starts. But when Georgia faced the meat of its schedule in the rugged SEC, Stafford struggled mightily.

The Bulldogs lost four times in a five-game stretch after their 5-0 start, including humbling losses to the Commodores and Wildcats. Stafford twice lost his starting job -- first to redshirt freshman Joe Cox, who came off the bench to lead the Bulldogs to a 14-13 win over Colorado and started the following week at Ole Miss, and then to Tereshinski, who returned to start in losses to Tennessee and Vanderbilt.

The Bulldogs hope Stafford's baptism under fire in 2006 will pay big dividends this season. After winning the starting job for good after the 24-22 loss to Vanderbilt, a team the Bulldogs had beaten 11 straight times, Stafford led Georgia to victories in four of its last six games. That winning stretch included a hat trick against ranked opponents to finish the season: 37-15 at then-No. 5 Auburn, 15-12 over No. 16 Georgia Tech and 31-24 over No. 19 Virginia Tech in the Chick-fil-A Bowl.

Against the Yellow Jackets, Stafford threw the game-winning touchdown pass to Mohamed Massaquoi with 1:45 left to give the Bulldogs their sixth consecutive victory over their in-state rivals. In the Chick-fil-A Bowl, Stafford rallied Georgia to 28 consecutive points in the second half to wipe out a 21-3 deficit against the Hokies.

"It was huge for us, especially with the way we won those games," Stafford said. "We went into Auburn and dominated, had the game-winning drive and stop against Georgia Tech and then had a full-fledged comeback against Virginia Tech. It's definitely something that helped our confidence and gets us excited about next year."

The Bulldogs are excited about this season because Stafford grew up a lot as a freshman. The strong-armed Texan finished 2006 with modest production -- he completed 52.7 percent of his passes and threw nearly twice as many interceptions (13) as touchdowns (seven) -- but his decision-making and knowledge of the offense were markedly better at the end of the season.

"I think it's something a lot of young quarterbacks go through," Stafford said. "It was a tough run for a while, but you've got to show you can bounce back and stay confident. I was able to keep my confidence." 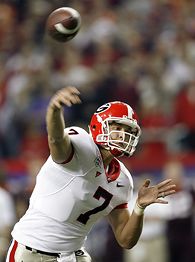 Stafford will have to be confident this season, as Georgia tries to keep pace with defending national champion Florida, Tennessee and improving South Carolina in the SEC East. The Bulldogs must replace three starting offensive linemen and tight end Martrez Milner, the team's leading receiver. Seven signees enrolled early, including a pair of juco offensive linemen.

With even bigger losses on defense, including ends Charles Johnson and Quentin Moses and linebacker Tony Taylor, Georgia's offense has to improve. The Bulldogs ranked 79th in Division I-A in passing last season with 184.4 yards per game and 90th in total offense with 311.8 yards per game.

Stafford wasn't the only one to blame for Georgia's struggles last season. Bulldogs receivers dropped far too many passes, and their quarterbacks were sacked 33 times. Worse, Georgia ranked 68th nationally in turnover margin, losing 15 fumbles and throwing 16 interceptions.

Massaquoi, who caught 30 passes and two touchdowns last season, said the team's receivers struggled adjusting to the velocity of Stafford's passes early in the season.

"It's not an excuse," Massaquoi said. "When it comes down to it, if a guy is putting the ball where it needs to be, you've got to catch it. He has a very strong arm, but he's not one of those guys that just tries to impress people with his arm strength. He tries to put touch on the ball, too."

"I'm really confident with him," Stafford said of Bobo. "I think he's got a great mind and I'm just looking forward to the years to come. I'm excited about working with him and bouncing ideas off each other."

Massaquoi said the Bulldogs are excited to see what their quarterback will do in his second season, too.

"As last year progressed, he was getting more and more confident," Massaquoi said. "He's just one of those guys that's a natural born leader and he commands everyone's respect. His talent shows on the field. He hasn't reached the surface yet; I think he's barely scratched it."