After a 2006 season that included so many close losses, Texas A&M seemed close to turning around its fortunes in coach Dennis Franchione's fourth year in College Station. The Aggies lost three regular season games by a combined six points -- a four-point loss to Texas Tech and one-point losses to both Oklahoma and Nebraska -- but then rallied to beat Texas in the finale, ending a six-game losing streak in the game that matters most.

Then Texas A&M played California in the Holiday Bowl.

And it wasn't even close.

The Bears blasted the Aggies 45-10, and Texas A&M lost for the ninth time in its last 11 bowl games and failed to finish in the final top 25 poll for the seventh consecutive season. 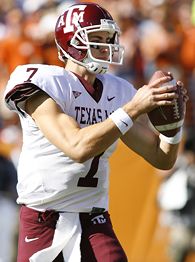 So as Texas A&M heads into spring practice and begins preparations for the 2007 season, are the Aggies closer to becoming a real threat in the Big 12 South, or closer to putting their coach back on the hot seat, where Franchione seemed to sit ever since he arrived from Alabama before the 2003 season?

"The Holiday Bowl left a nasty taste in our mouth, but we know what we need to do," said Jorvorskie Lane, the Aggies' 270-pound tailback. "We want to compete in the Big 12 and with everybody in the nation. We're still not satisfied with a 9-4 record. We were looking for a 10-win season last year. In 2007, we want to be Big 12 champions and compete for a national championship."

Offensively, the Aggies seem to have everything in place for a sustained run toward their first Big 12 championship since 1998. Junior Stephen McGee, who led all Big 12 Conference quarterbacks with 666 rushing yards and threw only two interceptions in 313 pass attempts, should be even better in his second full season as a starter.

McGee, a tough, gritty Texan, earned the respect of his teammates last season by lowering his shoulders and gaining tough yards.

"Everybody knows that McGee is tough," Lane said. "We've got a lot of respect for him. Everybody knows what kind of attitude to expect from McGee. We know if we need one yard, McGee is going to find a way to get it."

But McGee also knows he must develop into a more polished passer for the Aggies to be truly effective. As a sophomore, he threw for 2,295 yards and 12 touchdowns. But the Aggies rarely threw the football down the field (they ranked 11th in the Big 12 in pass offense -- only Colorado was worse -- with 190.5 yards per game), and McGee often looked to run first.

In the Holiday Bowl, the Bears constantly shadowed McGee with a defender, limiting him to only 31 rushing yards on eight carries. Big 12 opponents might use that same defense this season.

"We want to throw the ball down the field a little bit more and take advantage of our wide receivers," McGee said. "We just need to do a lot of the little things better." 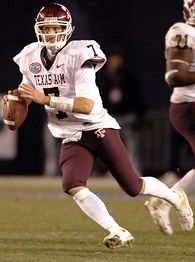 The Aggies must replace their top two receivers, Chad Schroeder and L'Tydrick Riley. Tight end Martellus Bennett, who recently left the school's basketball team to concentrate on football, is the top returning pass catcher. Guard Grant Dickey is the only starting offensive lineman who must be replaced.

"We were pretty disappointed with our performance in the Holiday Bowl, but hopefully we can take that as a positive going into next year," McGee said. "We know we've still got a long way to go before we get to where we want to be."

The Aggies certainly have two running backs who can get them there. Lane ran for 725 yards last season and tied a 79-year-old school record by running for 19 touchdowns. The junior from Lufkin, Texas has lost five pounds during the offseason and hopes to be closer to 260 when the Aggies open the season Sept. 1 against Division I-AA Montana State.

Sophomore Mike Goodson, who led the Aggies with 847 rushing yards as a freshman, could play a larger role on offense this season. He is faster than Lane and is a threat catching the ball out of the backfield.

"He's the next Reggie Bush," Lane said. "He's going to be a great player. He had a good freshman year and he's going to get better and better. It's going to be exciting to see what he can do."

Unlike during Franchione's first three seasons at Texas A&M, the Aggies won't have to light up the scoreboard to win games. Defensive coordinator Gary Darnell stabilized the defense in his first season.

But the Aggies still have plenty of room for improvement.

"We were right there at the end of all those games," McGee said. "I wouldn't say it was our inability to close or finish games. We're 20 seconds and six points away from winning all those games. But we left last year in the past, learned our lessons and we're moving on."