GAINESVILLE, Fla. -- What was the best thing to happen to Florida quarterback Tim Tebow this spring? 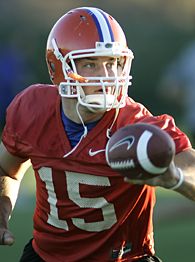 Tebow, a sophomore who takes over the full-time starting job from departed senior Chris Leak this fall after playing sparingly during the Gators' national championship season in 2006, strained his left (throwing) shoulder near the beginning of spring practice.

And in the Gators' new world, where seemingly nothing goes wrong and everything goes right (especially against Ohio State), even that injury turned into something positive. Because Tebow's sore shoulder prevented him from heaving the football down the field during spring practice, he was forced to work on his short and intermediate pass routes, which require more touch and timing with his receivers.

Florida coach Urban Meyer said those were the areas Tebow needed to improve most during spring practice. In Saturday's spring game in front of an announced crowd of 47,500 at Florida Field, Tebow completed 17 of 27 passes for 216 yards and three touchdowns to lead the Blue team to a 27-21 win over the Orange team.

Most importantly, it was a great start for Tebow, who spent more time running than throwing during his freshman season. In 2006, Tebow attempted only 33 passes, while running 89 times.

"Tim has a sore shoulder and that's one of the greatest things that ever happened to him," Meyer said. "I think he learned a lot from Chris about game management, about touch and completing passes. Just the way he threw the short ball, very impressive, and the way he got the ball out. The last week and a half, he's been tremendous. He's ready to go. Tim Tebow is ready to go play quarterback at Florida."

And the Gators seem ready to run along with him, even after losing 16 starters from the team that blasted the Buckeyes 41-14 in the BCS title game Jan. 8. Tebow performed well in the spring game despite not having his team's most dangerous weapon, sophomore Percy Harvin, who was held out of the three-hour scrimmage to avoid injury. Senior Andre Caldwell didn't play much, either, so seldom-used receivers Louis Murphy, Cade Holliday and Jarred Fayson became Tebow's favorite targets.

"The last week and a half, he's been tremendous. He's ready to go. Tim Tebow is ready to go play quarterback at Florida."
-- Florida coach Urban Meyer on QB Tim Tebow

"It felt good getting a chance to sit back there and throw it around a little bit," Tebow said. "That's what I like to do and it's fun."

Gators offensive coordinator Dan Mullen said Tebow showed a quicker release and better touch during the spring game, which consisted of four 12-minute periods and a running clock in the second half.

"He had a little bit of a shoulder issue early in the spring and we had to really pay attention and adjust his throwing motion slightly," Mullen said. "By doing that, it really caused him to focus on how to throw the ball the right way. It's really helped him develop a touch, develop balance, develop consistency and accuracy with his throws. He's really spent a lot of time, from the bowl practice on, of really focusing on balance and fundamentals of the throwing motion."

Coming into the spring, Meyer was worried Tebow's throwing motion was too long and caused him to hold the football even longer. Meyer also wanted Tebow to throw the football with less velocity.

"When he first came in, he threw it so hard, it was hard for us to catch it," said Murphy, who caught eight passes for 129 yards and one touchdown during Saturday's scrimmage.

Tebow threw for more than 9,500 yards and 95 touchdowns during three seasons as a starter at Nease High School in Jacksonville, Fla.. But Meyer said he wasn't a very good passer during his first season at Florida. Most of Tebow's time in 2006 was spent lowering his head and ramming the ball into the middle of the line. 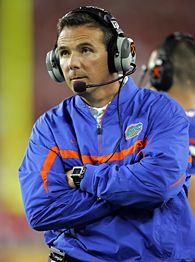 "The thing that makes him different than any player I've been around is his drive, his competitiveness," Meyer said. "He's an extremist. That's good to have. But at times you have to learn to control it, especially playing quarterback, with touch passes. It's great when you make the receivers' hands hurt, but go complete some balls. I don't believe he was an excellent thrower the first half of the season last year. I think he's an excellent thrower [now]. He and coach Mullen have a good deal going right now. They prepare very well together. [Tebow] wakes up every morning and tries to get better at his job."

Tebow is certainly better than he was during the 2006 season, which might spell trouble for the rest of the SEC. Besides his improved throwing, Mullen said Tebow's speed and mobility will allow the Gators to re-install the read component of the spread offense the coach ran at Bowling Green and Utah. Leak, who threw for more yards and completions than any quarterback in Florida history, wasn't very mobile.

"I can see it expanding a bunch for us because Tim brings a different threat running the football than Chris did," Mullen said.

Leak ran for only 30 yards in 14 games last season; Tebow was second on the team with 469 yards on the ground and led the Gators with eight rushing touchdowns. Meyer estimated Florida ran only two to four option plays per game last season.

"It was nonexistent," Meyer said. "[Tebow] is an excellent runner, a good decision maker. A lot of people are going to stack the box against us this year, and we need to be able to protect the run with our quarterback play."

"Are we talented enough to compete for the SEC? I'd have to say we are. Playmakers on offense aren't hard to find right now."
-- Florida coach Urban Meyer

The Gators still have plenty of work to do if they're going to become the first team to win back-to-back SEC titles since Tennessee in 1997-98. They lost five starters on offense, including leading rusher DeShawn Wynn and leading receiver Dallas Baker. But four starters, including three seniors, are back on the offensive line. Junior Kestahn Moore, who was unspectacular during his first two seasons, emerged as the leader to start at tailback, then underwent hernia surgery last week.

Worse, nine starters must be replaced on defense, including three in the secondary. Tebow had his way against new cornerbacks Wondy Pierre-Louis and Markihe Anderson during Saturday's scrimmage.

"Are we talented enough to compete for the SEC?" Meyer asked. "I'd have to say we are. Playmakers on offense aren't hard to find right now."

Starting with the quarterback.