Editor's note: Each day this week one of ESPN.com's four college football writers will share memories from the best game he ever attended. On Friday, we will post a collection of the best memories submitted by SportsNation.

About the time Georgia radio play-by-play legend Larry Munson was screaming, "We just stepped on their face with a hobnail boot and broke their nose!" my younger sister was probably yearning to crush my face with her high-heeled shoes. 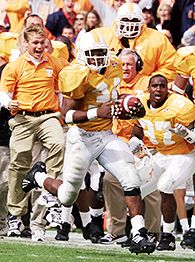 It was Oct. 6, 2001, and my younger sister was preparing to walk down the aisle in Arizona. Her older brother was sitting in the press box at Neyland Stadium in Knoxville, Tenn., watching one of the most exciting finishes in college football history.

First, a disclaimer and another much-owed apology to my sister, brother-in-law and mother. My first daughter was only 5 months old at the time, and my wife and I weren't flying her across the country.

Honestly, I was still making a paltry salary as a newspaper reporter, so flying across the country wouldn't have been financially responsible, especially with a new child in the house. (OK, six years later, I'm still trying to justify a very poor decision.)

If my sister and mother had only checked the college football schedule that fall while they were planning her wedding -- the No. 1 rule in Southern etiquette -- they would have known where I'd be that Saturday: sitting among 107,592 fans on the banks of the Tennessee River.

It was Mark Richt's first SEC road game as Georgia's coach, and he was taking David Greene, a redshirt freshman, to play in one of college football's most hostile environments. The Bulldogs had lost five in a row at Tennessee and hadn't won at Knoxville since 1980 -- Herschel Walker's freshman season.

Tennessee took a 14-0 lead in the first quarter, the Volunteers' fans were signing "Rocky Top" over and over again and an all-too-familiar outcome seemed to be coming for Georgia.

But then Bulldogs receiver Damien Gary ran back a punt 72 yards for a touchdown, and Greene threw a 15-yard touchdown pass to Fred Gibson to make it 17-17 at the half.

Neither team scored in the third quarter, and the Bulldogs seemed to be on their way to a surprising victory over No. 7 Tennessee after Billy Bennett kicked a 31-yard field goal to put Georgia ahead 20-17 with about 5½ minutes to play.

Tennessee hadn't mustered anything offensively against Georgia in the second half. Then Vols quarterback Casey Clausen threw an interception with 1:53 left, and the game seemed to be over. But Georgia failed to pick up a first down on its ensuing possession, giving Tennessee the ball back at the Volunteers 15 with 1:20 to go.

With less than a minute remaining, Clausen threw a screen pass to running back Travis Stephens in the left flat. The Bulldogs' defense overplayed it, and Stephens ran down the left sideline for a 62-yard touchdown. The point-after kick put the Vols ahead 24-20 with 44 seconds left, and Neyland Stadium was louder than any place I'd ever heard before.

A few minutes later, the stadium was dead silent.

Georgia got the football back at its own 41 with 39 seconds to play, after the Volunteers squibbed the kickoff. Greene threw two passes to tight end Randy McMichael, who worked brilliantly against a prevent defense, and the Bulldogs quickly moved to the Volunteers 6.

After a timeout, Richt made one of the most creative play calls I've ever seen. Greene took the snap and faked a handoff. Fullback Verron Haynes acted as if he was going to block a linebacker, but no one picked him up in pass coverage. So Greene lofted a soft pass to Haynes in the back of the end zone for a 6-yard touchdown with five seconds left.

The play -- "P-44-Haynes" -- gave Georgia an improbable 26-24 victory. It also gave Richt credibility in his first season. He led the Bulldogs to their first SEC championship in 20 years the following season.

Greene left Georgia three years later with more victories than any other quarterback in Division I-A history. And Haynes, who had been a seldom-used fullback, eventually became a bruising runner and played five seasons for the Pittsburgh Steelers.

Somewhere between the locker rooms and press box in Neyland Stadium, I tried to call my sister to tell her I had just witnessed one of the greatest college football games I could remember.