A couple of weeks ago, Penn State coach Joe Paterno stuck his head in defensive coordinator Tom Bradley's office and ridiculed his longtime assistant, a joke that has become an annual ritual in State College, Pa. 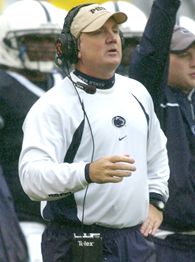 Paterno, 80, is set to begin his 42nd season as the Nittany Lions' coach this fall. He is the second all-time winningest coach in Division I-A history with a record of 363-121-3. Florida State's Bobby Bowden has 366 career victories.

Bradley, who is about to begin his 29th season as a Penn State assistant coach, has been as much a part of Nittany Lions football as Paterno during the past three decades. A football letterman at Penn State from 1977-78, Bradley was hired as a graduate assistant in 1979 and named a full-time coach the following year.

Nearly three decades later, he's still coaching the Nittany Lions. As a player and assistant, Bradley has been involved in 79 percent of the games Paterno has coached at Penn State since 1966.

Bradley is an anomaly in college football, one of a few longtime assistants who have remained loyal to the coaches who hired them. More and more, college football coaches are jumping at the next available opportunity, whether it be a chance to move up the ladder to a head coaching position or an opportunity to deepen their pockets.

Bradley also knows he has been fortunate to work at a school that stood by its head coach for so long.

"I have been lucky to work for one guy who has been at one place for a long period of time," Bradley said. "He kept us employed probably when we didn't deserve it some years. He's been very loyal to us and very loyal to our families."

A few assistant coaches at other programs have established even deeper roots -- Hawaii linebackers coach George Lumpkin has coached on the island for 33 years (and for five different coaches) and Virginia Tech running backs coach Billy Hite has coached the Hokies for 30 years. Other longtime assistants include FSU defensive coordinator Mickey Andrews, who has been on Bowden's staff for 22 seasons; Kansas State defensive line coach Mo Lattimore, who has been in Manhattan, Kan., for 23 years; and West Virginia defensive line coach Bill Kirelawich, who has been involved with the Mountaineers in some capacity since 1980. Nonetheless, few staffs have as much collective experience as the Nittany Lions.

"There's a lot of loyalty that has been built up over the years," Bradley said. "There's just a family atmosphere between the staff, the players and the community. It's a place that means a lot to my family."

"There's a lot of loyalty that has been built up over the years. There's just a family atmosphere between the staff, the players and the community. It's a place that means a lot to my family."
-- Tom Bradley

Bradley had opportunities to leave Penn State in the past. He declines to identify the schools where he has interviewed. According to published reports, he was most recently considered a candidate for head coaching openings at Temple and Illinois in 2005.

"I don't want to go be a head coach just to say I've been a head coach," Bradley said. "That's never been part of it. If I find something better, I'll go. But I haven't found it. It's fairly that simple.

"I don't even talk about it. When I talk to other schools, I tell them, 'Look, we didn't even talk.' I don't want people to know. I don't want my recruits to know about it. So that's why I don't talk about names. I don't think it's fair to the other schools that I turned them down. It's flattering to me that they had interest in me. But I'm not one of these people who says, 'Well, I turned this school down.' It's nice that they even think I was good enough to work for them."

Many Penn State football fans believe Bradley hasn't left because he is probably first in line to replace Paterno when the legendary coach retires. Rutgers coach Greg Schiano and Temple coach Al Golden, both former Nittany Lions assistants, might be the top outside candidates.

But Bradley will probably receive Paterno's endorsement because of his loyalty. Bradley long has been regarded as Penn State's best recruiter -- he sent cornerback Justin King 30 handwritten letters in one day.