In the first entry of a three-part package, Mark Schlabach looks at the most intriguing games of the 2007 season.

North Texas at Oklahoma, Sept. 1
Sooners fans probably haven't forgotten the interception new Mean Green coach Todd Dodge threw against Oklahoma as Texas' quarterback in 1984. With time winding down in the Red River Shootout, Oklahoma's Keith Stanberry appeared to intercept Dodge's pass in the end zone with five seconds to play. But Southwest Conference officials ruled Stanberry was out of bounds, and then Texas' Jeff Ward kicked a 32-yard field goal as time expired for a 15-15 tie. Dodge probably won't forget his first trip to Norman, Okla., as a college coach, either.

Texas Tech at SMU, Sept. 3 (4 p.m., ESPN)
Before the Tennessee Titans used the "Music City Miracle" to beat the Buffalo Bills in the 2000 NFL playoffs, SMU used the exact same play to defeat Texas Tech and remain undefeated during the 1982 season. The Mustangs, led by running backs Eric Dickerson and Craig James, were ranked No. 2 in the country with a 9-0 record. But with 17 seconds to go, the Red Raiders kicked a field goal to tie the score at 27-27. Texas Tech tried to squib the kickoff to run out the clock, but Blane Smith fielded the football after bobbling it. He turned and fired a pass across the field to Bobby Leach, who ran 91 yards down the sideline for a game-winning touchdown. The Pony Express won the game, 34-27, and the play became known as the "Miracle on Fourth Avenue." SMU tied Arkansas the following week to win the Southwest Conference title and then beat Pittsburgh (and quarterback Dan Marino) 7-3 in the Cotton Bowl. The Mustangs finished 11-0-1 and No. 2 in the country. Five years later, SMU received the death penalty from the NCAA. A quarter-century later, the Mustangs are still recovering from one of the harshest penalties in college sports history.

Florida State at Clemson, Sept. 3 (8 p.m., ESPN)
College football's most famous family feud -- the "Bowden Bowl" -- heads to prime time on Labor Day night. It will be the ninth time FSU coach Bobby Bowden has faced his son, Clemson coach Tommy Bowden. The Tigers have won the last two matchups and three of the last four against the Seminoles, including a 27-20 win in Tallahassee last season. This Bowden reunion is a bit smaller, after Jeff Bowden resigned as FSU's offensive coordinator last season.

North Carolina State at Boston College, Sept. 8
Do you think the Eagles will be fired up to face the Wolfpack? Former Boston College coach Tom O'Brien, who made the rare job switch within conference and left for NC State, coaches his first road game at Chestnut Hill. The Eagles seemingly had last year's game against the Wolfpack won, until Daniel Evans directed NC State on a 72-yard touchdown drive in the final minute. Evans' 34-yard touchdown pass to John Dunlap with 8.5 seconds left gave the Wolfpack a stunning 17-15 victory.

TCU at Texas, Sept. 8
The Horned Frogs haven't played the Longhorns since 1995. Both teams have national championship aspirations. Only one school has a mascot known for shooting blood out of its eyes.

Hawaii at Louisiana Tech, Sept. 8
If you live east of the Mississippi River, this is your only chance to see Hawaii quarterback Colt Brennan in person. The Warriors don't travel farther east than Ruston, La., and the Louisiana Tech game is one of only five dates on the U.S. mainland. 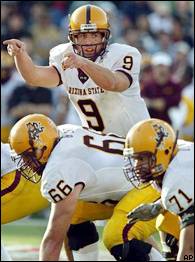 Southern California at Nebraska, Sept. 15
Believe it or not, one of the reasons Sam Keller chose to transfer to Nebraska over Colorado and Oklahoma is because the Trojans were coming to Lincoln. Keller didn't get enough of the Trojans while he was playing at Arizona State? Keller threw for 347 yards and two touchdowns against USC in 2005, but the Trojans also intercepted five of his passes in their 38-28 victory. Keller went 0-3 against the Trojans while playing with the Sun Devils.

Florida State at Colorado, Sept. 15
The first time the Seminoles play on a campus west of the Mississippi River since a 14-7 victory at Southern California in the 1997 opener.

Idaho at Washington State, Sept. 15
New Vandals coach Robb Akey might know a few of the Cougars' tendencies -- he was a Washington State assistant the previous nine seasons before landing his first head coaching job.

Louisville at Kentucky, Sept. 15
They might want to add a triple-digit scoreboard at Commonwealth Stadium. Quarterbacks Brian Brohm and Andre Woodson are capable of producing one of the best shootouts of the season. And, yes, the Wildcats are capable of winning the game.

Oklahoma at Tulsa, Sept. 21 (8 p.m., ESPN)
How's this for Friday Night Lights? The Sooners and Golden Hurricane meet at Skelly Stadium on a night when Jenks High and Union High -- the country's best high school football rivals -- are usually the headliners. The Sooners have won the last three games in the series by a combined score of 126-15.

Portland State at San Diego State, Sept. 22
New Vikings coach Jerry Glanville said Division I-AA Portland State would be "the hardest hitting team on the West Coast." The former Atlanta Falcons and Houston Oilers coach has a monumental chance at an upset against the rebuilding Aztecs.

Alabama at Florida State, Sept. 29
Bobby Bowden, major college football's winningest coach, against Saban, the sport's highest-paid coach. The Seminoles and Crimson Tide will play in Jacksonville's Alltel Stadium, with each school getting half the seats. Alabama and FSU haven't played since 1974, when the Crimson Tide won 8-7. Bowden, who spent one semester as a quarterback at Alabama, grew up a Crimson Tide fan and idolized legendary Tide coach Paul "Bear" Bryant, one of two coaches he passed to become the winningest Division I-A coach.

Miami at North Carolina, Oct. 6
Former Hurricanes coach Butch Davis plays his old school for the first time, after he became the Tar Heels' coach following a forgettable tenure in the NFL. Davis led Miami to a 51-20 record in six seasons and either coached or recruited more than two dozen NFL first-round draft choices.

LSU at Alabama, Nov. 3
At least Saban doesn't have to return to Baton Rouge until 2008. The former LSU coach takes on his former team in a key SEC West showdown.

Indiana at Northwestern, Nov. 10
There won't be a dry eye in the building as players, coaches and fans remember former Northwestern coach Randy Walker, who died of a heart attack last year, and former Indiana coach Terry Hoeppner, who died last month from complications of a brain tumor. Walker was Hoeppner's mentor at Miami, Ohio.

Georgia at Georgia Tech, Nov. 24
Can the Bulldogs beat the Yellow Jackets without Reggie Ball? The Georgia Tech quarterback never had much success against his school's biggest rival in four tries. So much so that Georgia fans tried to get him a fifth year of eligibility.

California at Stanford, Dec. 1
On the silver anniversary of "The Play," the Bears and Cardinal play at Stanford. On Nov. 20, 1982, Cal used five laterals to go 57 yards with no time left on the clock in what became the most famous kickoff return in college football history. The Cardinal might want to keep the band in the stands this year.