ORLANDO, Fla. -- Oregon senior Dennis Dixon, the Ducks' projected starting quarterback this fall, is trying to hit left-handed pitchers in Florida this summer, instead of trying to hit receivers on campus. 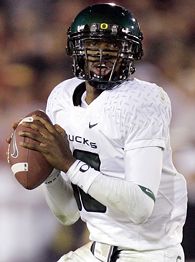 "I think he'd be better served, in my situation, reading defenses rather than reading curveballs," Bellotti said.

Dixon, 22, was selected in the fifth round of last month's major league draft (No. 168 overall) by the Atlanta Braves. He hadn't played baseball since his senior season at San Leandro High School near Oakland, but the Braves were impressed by his arm strength and athleticism.

Dixon, at 6-foot-4 and 200 pounds, has been inconsistent as the Ducks' quarterback the past two seasons. He won his first three starts as a sophomore in 2005, completing 66.2 percent of his passes for 540 yards with five touchdowns and only one interception during the games in which he replaced injured Kellen Clemens.

Last season, Dixon helped Oregon win its first four games, throwing a 23-yard touchdown to Brian Paysinger with 46 seconds to go in a controversial 34-33 win over Oklahoma. Three weeks later, however, Dixon threw three interceptions in a 45-24 loss at California and never regained his confidence.

Dixon threw 12 interceptions and only six touchdowns in the last nine games of 2006. The Ducks lost six times in the last three months of the season, including a 38-8 loss to BYU in the Pioneer PureVision Las Vegas Bowl, their fourth loss in a row. Dixon played so poorly down the stretch that he lost the starting job to Brady Leaf, who started the final two games but is listed as No. 2 on the depth chart for this fall.

Given his poor finish during Oregon's 7-6 season, Bellotti felt Dixon had plenty of work to do during the spring and summer.

"He has to improve his decision-making process and throw the long ball better," Bellotti said. "Everything else he can do. He needs greater consistency in game settings and more touch on the long ball. He can get better doing those things."

Bellotti hoped Dixon would make strides in those areas this summer. But instead of joining his teammates for voluntary passing drills and workouts in Eugene, Ore., Dixon flew to Orlando on June 14 to join the Gulf Coast Braves, the lowest level in the Braves' minor league system.

Bellotti realized there was a chance Dixon might be drafted by a major league team again -- he was selected in the 20th round of the 2003 draft by the Cincinnati Reds -- after the quarterback worked out for several baseball teams during the offseason. But Bellotti said he was surprised Dixon was drafted so high.

"It's semi-unusual for a guy that hasn't played since high school," Bellotti said. "But he's an extremely athletic guy and they obviously felt like that athleticism would translate over to baseball. I don't feel very good about it. But it's a situation that arose and a decision that Dennis made. I can't stand in the way of that. I do think he'd have the same opportunity in football if he spent as much time preparing here."

This isn't the first time baseball has caused a rift between a college football coach and his quarterback. When Steve Spurrier was coaching at Florida, quarterback Doug Johnson was a top-rated third baseman in the Tampa Bay Devil Rays' minor league system. Johnson played rookie league baseball during the summers of 1996 and 1997, much to the chagrin of Spurrier, who wanted his quarterback in Gainesville learning the nuances of the passing game.

Most two-sport athletes are eventually forced to choose one sport over the other. Former Michigan quarterback Drew Henson flip-flopped between minor league baseball and college football before finally signing a $17 million contract with the New York Yankees and forgoing his final season with the Wolverines. Colorado Rockies first baseman Todd Helton was Tennessee's starting quarterback in 1994 (until he was hurt and Peyton Manning took over) before he jumped to baseball. Joe Borchard was Stanford's starting quarterback until the Chicago White Sox selected him in the first round of the 2000 draft and paid him a record $5.3 million signing bonus to give up his senior season with the Cardinal.