Are eight straight seasons with at least seven victories -- but each with fewer than 10 wins -- a sign of consistency or mediocrity?

The inability to eclipse the nine-win barrier on a consistent basis has prevented many of the college football teams ranked from Nos. 26 to 50 from joining the country's elite teams during the past decade.

But for various reasons, whether it be NCAA probation and scandals (Alabama and Colorado), being located in states with limited recruiting resources (Clemson, Ole Miss, Oregon State, Purdue and Utah) or being a program that has traditionally been overshadowed by a larger in-state rival (Georgia Tech, Texas Tech, UCLA), many of the programs have failed to achieve major success on a consistent basis.

Some of the programs ranked on the fringe of the top 25 have just begun reaching their potential. California (35) was one of the sport's worst programs before coach Jeff Tedford arrived. The Bears won 12 games in the five seasons before Tedford was hired, including a woeful 1-10 mark in 2001. Tedford has won 43 games in five seasons at Cal, and he has positioned the Bears as the Pac-10's second most consistent program behind Southern Cal.

Texas Tech (32) also seems to be another program on the rise. The Red Raiders have averaged eight victories the past seven seasons, and their 56 wins since 2000 are the fourth-most in the Big 12 (only Oklahoma, Texas and Nebraska have won more). Texas Tech has won four of its last five bowl games (only Texas has won more postseason games since 2000 among Big 12 teams).

Other programs have seemingly leveled off. Tommy Bowden has coached at Clemson for eight years and has failed to lead the Tigers to an ACC championship (the school's title drought is now 16 seasons long). Joe Tiller led Purdue (33) to its first Rose Bowl in 34 years in 2001, then won only 13 games the last two seasons combined.

Some of the teams trying to crack the top 25 are trying to re-establish their programs. Alabama (34) was mired in NCAA probation for rules violations committed by former coach Mike Dubose. Reduced scholarships were a big reason former coach Dennis Franchione left for Texas A&M, and a big reason Mike Shula failed to win more than six games in three of his four seasons at his alma mater.

Colorado hasn't recovered from a 2004 scandal, in which several women said CU football players used sex, alcohol and drugs to lure recruits (subsequent investigations ended with no sex-related criminal charges). Gary Barnett, who led Colorado to a Big 12 championship and four Big 12 North titles, was forced out after the 2005 season. Former Boise State coach Dan Hawkins was hired to clean up the mess and won two games during his first season in 2006. 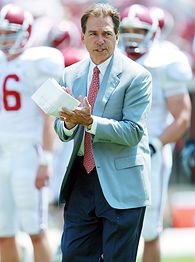 The programs ranked outside the top 25 include overachievers and underachievers. Southern Mississippi (39) has found unprecedented success under coach Jeff Bower, who has led the Golden Eagles to 13 consecutive winning seasons. Fresno State (38) has averaged more than seven victories per season during coach Pat Hill's 10-year tenure and won 38 games during a four-year period from 2001-04. Marshall (42) won more games than any other Division I-A program during the 1990s, after the Thundering Herd climbed from Division I-AA status.

Meanwhile, programs like Clemson, Georgia Tech and Arizona State (41) have long been considered sleeping giants in the sport. Arizona State is located in a warm climate and is close to the fertile recruiting hotbed of California. Quarterback Jake Plummer led the Sun Devils to an 11-1 record and the Rose Bowl during the 1996 season, but Arizona State has won more than eight games in a season only twice in the past 10 years.

Georgia Tech has won only one ACC championship since former coach Bobby Ross led the Yellow Jackets to the UPI national title in 1990. Georgia Tech won at least seven games in each of the last eight seasons, but couldn't break through in the expanded ACC until last season, when it finished 9-5 and lost to Wake Forest in the ACC championship game.

While some of the programs ranked outside the top 25 seem to be content with their lot in life, others keep trying to break through. Ole Miss (46) fired coach David Cutcliffe after he won 44 games in six seasons. His replacement, Ed Orgeron, won seven games in his first two seasons.

Sometimes, being an also-ran isn't so bad after all.