BLACKSBURG, Va. -- The school with the broken heart has endured even more sadness, thanks to the man who used to be its favorite son. 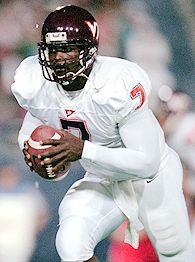 At a time when Virginia Tech is still healing from April's horrific campus massacre, which left 32 students and faculty members dead in the worst shooting spree in U.S. history, the Hokies have dealt with the negative publicity surrounding former All-America quarterback Michael Vick.

Vick, who led Virginia Tech to the 1999 national championship game and was the No. 1 pick of the Atlanta Falcons in the 2001 NFL draft, pleaded guilty Monday to a dogfighting charge in federal court in Richmond. He faces one to five years in prison when he is sentenced Dec. 10.

Vick's televised court appearance and subsequent apology, in which he admitted "using bad judgment and making bad decisions," was hardly noticed Monday morning across the state at the Squires Student Center in Blacksburg. Several students sat around a TV near the cafeteria, but few paid attention to the images of Vick walking into a courtroom. Three TV sets on another wall went seemingly unnoticed.

But Hokies coach Frank Beamer, who recruited Vick from Warwick High School in Newport News, said he was saddened by the events surrounding his most famous player.

Marcus Vick, who followed his brother to Virginia Tech, was dismissed from the team after a series of transgressions on and off the field. The younger Vick was on campus late last week.

Virginia Tech athletics director Jim Weaver, who was unavailable for comment Monday, said the school didn't plan on disassociating itself from Michael Vick.

The school retired Vick's No. 7 jersey in 2002 and a banner with the name "Vick" flies from the northwest corner of Lane Stadium. Visitors to the school's Jamerson Athletic Center are greeted by Michael Vick Hall, which leads to the football team's film and meeting rooms.

"He earned that while he was [at Virginia Tech] -- before he engaged in these activities," Weaver told reporters in Blacksburg. "I don't see any reason to do anything at this time. ... I will just tell you I'm saddened that this has happened. We certainly don't condone the activities."

But Jerry Diffell, manager of the Tech Bookstore on Main Street, said most Virginia Tech students and football fans already have forgotten about Vick. The book store carries dozens of Hokie jerseys, including replicas of tailback Branden Ore's No. 28 jersey and cornerback Brandon Flowers' No. 18. But there are no Vick jerseys hanging from the store's racks.

In fact, other than a few football cards showing Vick in his No. 7 Virginia Tech jersey and color photos of Vick wearing a Falcons jersey which sit near the store's cash registers, the book store doesn't sell Vick items.

And Diffell said the store won't sell Vick items in the future, either.

"Why would I?" Diffell said. "We're just going to stay away from that stuff."