Tom O'Brien is a fantastic football coach. The no-nonsense, former Marine won 75 games in 10 seasons at Boston College and helped the Eagles make the transition from the Big East to the ACC.

But even after winning 10 games at Boston College last season, it was pretty evident O'Brien needed a change, and so did the Eagles.

O'Brien, who inherited a Boston College program stung by a gambling scandal in 1996, never seemed comfortable with the school's move to the ACC. He felt isolated in Boston, while the rest of the league's teams are located in the South. And O'Brien struggled to recruit faster athletes the Eagles needed to compete against the likes of Florida State, Miami and Virginia Tech.

Through three games, the change has worked out well for everyone involved, especially Boston College.

The Eagles gained 527 yards against one of the country's toughest defenses, and allowed only 63 rushing yards to a Georgia Tech offense that had scored nine rushing touchdowns against Division I-AA Samford the week before.

"I think the kids feel comfortable with the style we're coaching and how we're presenting game plans," Jagodzinski said. "They're buying into what we're doing."

No Boston College player has benefited more from the coaching change than senior quarterback Matt Ryan. Jagodzinski hired former East Carolina coach Steve Logan as his offensive coordinator and together they've opened up the passing game.

Ryan completed 30 of 44 passes for a career-high 435 yards and one touchdown against Georgia Tech. He threw for 985 yards with seven touchdowns and three interceptions in the first three games and might become a serious contender for the Heisman Trophy.

"It's definitely different from what we've done in the past," Ryan said. "There's a different philosophy in play calling and what we want to do with the football. I think there's more of an emphasis on getting a big play and getting explosion plays."

The Boston College defense has been just as explosive. The Eagles rank fourth in the country in run defense, allowing only 40.3 yards per game. Boston College also has nine interceptions and two forced fumbles in its first three games.

The Eagles have accomplished this despite losing several of their best players. Star linebacker Brian Toal is out for the season with a shoulder injury. Defensive tackle B.J. Raji was declared academically ineligible earlier this month, and defensive end Nick Larkin didn't play at Georgia Tech because of a sprained knee.

Jagodzinski says a lot of the credit goes to defensive coordinator Frank Spaziani, who was retained from O'Brien's staff and has coached at BC for the past 11 seasons.

"I know [Georgia Tech defensive coordinator Jon] Tenuta gets a lot of media exposure,"
Jagodzinski said. "But I think Frank does as good of a job as anybody in the country with the talent we have."

Jagodzinski has divided Boston College's season into four quarters because of its unusual beginning. After playing three ACC contests, the Eagles will be heavy favorites in their next three
games: home contests against Army, Division I-AA Massachusetts and Bowling Green.

"I think success is harder to handle than failure," Jagodzinski said. "You start believing what people are saying. That will be talked about a lot."

On (and Off) the Mark

On the Mark
Duke finally got a victory Saturday night, beating Northwestern 20-14 on the road at Ryan Field.

The Blue Devils won their first game since beating Virginia Military Institute on Sept. 17, 2005, ending a 22-game losing streak. It was Duke's first win over a Division I-A team since beating Clemson on Nov. 13, 2004, and its first road victory since beating North Carolina on Nov. 22, 2003.

"I was certainly not surprised," Duke coach Ted Roof said. "I expected it to happen sooner, but for whatever reason it didn't happen. To win it like we did, where we had to make a play at the end and find a way to win, I hope it helps our confidence. It can't hurt, that's for sure."

Nothing came easy for the Blue Devils, who had to stop the Wildcats on four straight plays from the Duke 7-yard line to end the game.

"It feels very good to get a victory," said Duke quarterback Thaddeus Lewis, who threw for 246 yards and three touchdowns. "We come out every week and work very hard to win, and to finally get a victory feels great."

(Off) the Mark
TCU's 34-13 loss at Texas two weeks ago likely cost the Horned Frogs a spot in a BCS bowl game. Its 20-17 loss at Air Force Thursday night put them in danger of collapsing.

TCU seemed to have the game won when it drove deep into Air Force territory with the score tied at 17 late in the fourth quarter. The Horned Frogs were well within field goal range in the final minute, but decided to go for the touchdown strike, and Andy Dalton's underthrown pass into the end zone was intercepted by Falcons cornerback Carson Bird.

TCU missed a field goal on its first possession in overtime, then Air Force won 20-17 on Ryan Harrison's 33-yard kick.

"We shouldn't have went to the end zone," TCU coach Gary Patterson told reporters after the game. "We should have run the football. Why we threw the football, I don't know. I don't call that side of the ball. We made a mistake."

But Horned Frogs offensive coordinator Mike Schultz wasn't alone in blame. TCU's defense, which its head coach directs, blew a two-touchdown lead in the second half. Air Force tied the game on Jim Ollis' 71-yard run with 5:55 to play in regulation.

Before the season, Auburn coach Tommy Tuberville complained when senior quarterback Brandon Cox wasn't given consideration for preseason All-SEC honors. Now Cox is in danger of losing his starting job after the Tigers were upset for the second week in a row, losing 19-14 to Mississippi State. Cox threw interceptions on each of the Tigers' first two possessions and was replaced by freshman Kodi Burns. Cox completed less than 50 percent of his passes in the last two games and has thrown six interceptions and two touchdowns this season.

(Off) the Mark
Only three teams have failed to run for 100 yards this season: Syracuse, North Texas and Notre Dame. Those teams are a combined 0-8. The Fighting Irish have carried 100 times for a whopping
minus-14 yards. Notre Dame has never averaged fewer than 125 rushing yards since 1946. 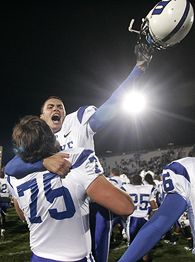