EUGENE, Ore. -- As California's Marcus Ezeff lay on the turf in the west end zone of Autzen Stadium on Saturday, his legs aching and his lungs burning, the hard-hitting safety expected the worst.

Ezeff already was mentally preparing for overtime, which meant at least one more possession against Oregon's high-octane offense. At the time, Ezeff believed the Ducks had just driven 77 yards in 89 seconds to score the game-tying touchdown in a thrilling Pac-10 shootout.

With the No. 6-ranked Bears leading No. 11-ranked Oregon 31-24, Ducks quarterback Dennis Dixon had driven his team right down the field in the final two minutes. Oregon reached the California 40 with 53 seconds to play. The Ducks were on the Bears' 20 with 29 seconds to go, then the 5 with only 22 seconds left.

"They did a nice job of making it down the field," California coach Jeff Tedford said. "I was getting ready for overtime. From the 5? They're too good from there."

After Tedford called timeout to let his defense catch its breath, the Ducks lined up to try to tie the game. Dixon took the snap and threw to the left side for senior receiver Cameron Colvin, who caught the pass around the 4. Ezeff had to fight through a block -- which he described as an illegal pick by a different Ducks receiver -- before he chased down Colvin near the end zone.

Ezeff leveled Colvin near the 1-yard line, but the Ducks receiver tried to stretch his right arm and the football around the pylon at the end zone. The football fell out of his hand.

It bounced into the end zone and rolled out of bounds.

"In my mind, I thought he scored," Ezeff said. "I was like, 'Damn, I'm going to be in trouble with my coaches.' But then I looked up and saw [cornerback] Brandon Hampton going after the football. I saw my coaches running at me making the signal for a touchback."

But first the Bears had to survive an instant replay review in the stadium where the Sooners were jobbed a year ago.

"It was pretty conclusive," California defensive coordinator Bob Gregory said. "It was very evident the ball went into the end zone and out of bounds. We would have been very surprised if they'd turned it the other way. It was just so obvious it couldn't have gone the other way."

It didn't go the other way, and the Bears took possession at their 20-yard line. They took a knee to run out the final 16 seconds and preserve a 31-24 victory, which stunned much of the sold-out crowd of 59,273, the largest crowd to ever watch a football game in the state of Oregon.

It was California's first win here since 1987, after having lost seven games in a row in Eugene.

"It's a huge win for us," said Bears receiver DeSean Jackson, who had a career-high 11 catches for 161 yards, including two touchdowns in the second half. "To come out here in Eugene and win as an underdog, it really is a big step for us. I saw West Virginia lose last night, and I knew it was important for us to come in here and play big. We've just got to keep winning football games."

When the Bears play again, they might be ranked higher in the national polls than they have been in 55 years. California, which was ranked No. 4 in 1952, doesn't play next weekend. And at least one team currently ranked ahead of Cal will lose before the Bears play Oregon State on Oct. 13 in Berkeley, Calif. Second-ranked LSU hosts No. 4 Florida on Oct. 6 in Baton Rouge, La. 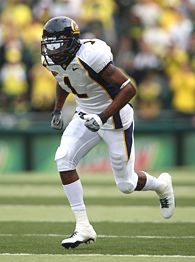 "We knew coming into this game that our season was on the line," Cal linebacker Worrell Williams said. "This game was our season. West Virginia fell off. Oklahoma fell off. I heard Texas even fell off. All we had to do was win. It was tough, but we got it done."

The Bears nearly fell more than once Saturday. Defenses dominated the first half of a game that was expected to be a track meet. The Ducks led 10-3 at the half, after the Bears were limited to only 119 yards of offense in the first two quarters. Oregon shut down tailback Justin Forsett and prevented quarterback Nate Longshore from throwing down field.

"All ya'll been waiting for me to make some plays to help my team, and this was an opportunity to do it," said Jackson, who hadn't caught a touchdown pass in the previous four games and hadn't had more than 45 receiving yards in a game this season. "Oregon had a great defense and they play a lot of man-to-man coverage. Sometimes they had a safety roll over the top. Coach Tedford and the coaches did a great job of calling my number."

The Bears finally got Dixon's number in the final 4½ minutes. After the Ducks tied the score at 24 on Dixon's 1-yard sneak for a touchdown with 7:06 to play, California was forced to punt from midfield.

The crowd stood and cheered as it anticipated watching Dixon lead the Ducks down the field again. On first-and-10 from the Oregon 11, Dixon dropped back and tried to throw over the middle to receiver Jaison Williams. But linebacker Anthony Felder stepped in front of the pass and intercepted it. 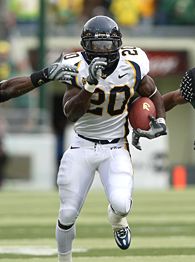 "I don't think he was expecting me," Felder said. "I picked up on that route earlier in the game and thought he might go back to it. I snuck back inside and jumped the route."

The Bears took over at the Oregon 21, and it took them only three plays to score the go-ahead touchdown. Forsett ran for 8 yards on first down and 12 on second. On first-and-goal from the 1, Forsett scored off left guard to put Cal ahead 31-24 with 3:11 to go.

Oregon still had plenty of time left, and Dixon took the Ducks right back down the field. He completed two quick passes, and then Jonathan Stewart broke a 23-yard run with less than 2½ minutes to play. But on first-and-10 from the Cal 17, defensive tackle Mika Kane deflected Dixon's pass to Stewart and it was intercepted by end Tyson Alualu.

"The turnovers were huge," Oregon coach Mike Bellotti said. "That's what we talk about all year long, but that's the undoing of a good football team."

"I think we're contenders and I know Southern Cal is going there [to Berkeley]," Forsett said. "But that's far away right now. We've got a lot of big games and we don't need any upsets."

Just one or two more of the teams ahead of the Bears.