In the clickety-clack of football shoes trudging into the bowels of Giants Stadium, in the blur of blank, numbed West Point faces marching toward the losing locker room, his was the unforgettable face. Alex Moore was the Army football player crying. There was rage and despair in those eyes, and tears streaming down his cheeks.

On his way out of a 58-12 pounding to Navy, out of a 1-11 senior season, Moore was on his way to the battlefields of Iraq, and he was desperate to believe that the descendents of old Army Chief of Staff George C. Marshall could still count on his boys. 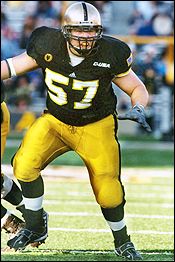 "I want an officer for a secret and dangerous mission," Marshall declared in a post-Pearl Harbor America. "I want a West Point football player."

Marshall had spoken those famous words at a time when West Point was one of the glamour football programs in America, when they were winning Heisman and Outland Trophies and looking like matinee idols on those grainy movie house reels seen on Saturday afternoons. Alex Moore and his West Point teammates were no glamour boys, but they sure considered themselves soldiers.

So, Moore wanted badly to believe his military leaders subscribed to such thinking in a post-Sept. 11 America. Moore wanted them to understand the scoreboard was lying, that when it came to measuring his worth as a leader, his lessons learned, his losing season didn't measure the mettle of the military man.

"I want to be the best platoon leader I can be, so I want to be where the action is, where I can serve best," Moore vowed.

Outside that locker room two years ago, Moore wouldn't stop holding himself accountable, wouldn't stop insisting he should've done more that day -- that season. He shook his head, and bit his lip, and insisted the next time he failed as a leader, the next time he lost, it could cost the United States of America the lives of soldiers on his watch.

And that song. That freaking song would haunt him from the banks to the Hudson River to Baghdad.

"The last song I'll ever hear on a football field is the Navy alma mater and I'll have to live with this the rest of my life," Moore groaned.

If you had ever doubted that Army-Navy is the most important football game in America, you just needed to stand in the cold concrete corridor that afternoon, talking to Alex Moore, and you would never doubt it again.

"I've had great leaders at West Point and I've observed great leadership," Moore said outside the locker room, clutching the ceremonial coins that Gen. Tommy Franks presented to the team captains before game. "This season, I guess I learned all the things not to do as a leader. Now, I've lived that too. We got beat a lot this year. We got beat badly today. As a leader, I can't lose anymore now. At this time next year, I'll be a platoon leader and I cannot be on the losing side then.

"If I'm going there with the infantry, I cannot lose."

Two years later, 1st Lt. Alex Moore was on the telephone, talking from Ft. Riley in Kansas about walking into a firefight just 20 minutes after taking command of more than 75 men in his platoon, about how it didn't take long, far from home, far from West Point, to understand the unconquerable truth of his West Point education.

"Football was the best education in leadership that I had in West Point," Moore said.

Before ever leading his men, Moore prepared like it was a football game. He probed his soldiers about the firefights he had never seen and pulled all nighters preparing for the enemies, studying with his superiors, immersing himself with information. He remembered those Army games when he believed he had prepared well enough victory, just to get his ass kicked again. All those losing Saturdays stayed with him in the desert. They drove him like a haunting ghost.

"There would be long patrols where I had moments to drift back to that Navy game, and think about how painful it was to lose. You think you're solid going in, think you have an opponent beat and you find out they're better trained than you. It made me better. Anytime I ever thought of slouching over there, I thought about how we got killed in that game, and how embarrassing and humiliating it was.

"Whenever I wanted to sleep there, I'd hear that Navy fight song again in my mind, and I'd be up, pushing harder. Football taught me to be aggressive, and out there with bullets flying, you've got to make the right decision right away. And you learn that in football. You learn that poise. No matter what, you've got to be the first one through the door, and I tried to do that on the offensive line there. Looking back, I should've done more to lead. I wish I had done more, but I also know: Football was the best leadership tool that I ever had at the Academy."

He was wounded twice in Iraq, with shrapnel catching him in the face, and a five-ton military truck crashing into his Hum-Vee after it had blown out a tire. Thank God he was wearing his night vision goggles, sparing his head a blow that could've been far worse than a concussion.

There were Saturdays a year ago, on patrols outside Fallujah, where Moore had stopped on the side of the road, checked his e-mail for updates on West Point football games. He's been back to campus this year, thrilled with the changing face of Army football under the legendary Bobby Ross, the team's new coach. He watched practices, caught two games, and witnessed such an elevated level of competence.

Navy is bowl-bound this year, but he thinks Army has a shot, a real shot now. And what Moore wouldn't give to come down out of the stands on Saturday in Philadelphia and take one more at Navy with Ross leading him into Lincoln Financial Field.

"I lived and died Army football," Moore said. "I would give anything to play one more game, to [put] my hand down on the ground one more time.

He did bring those ceremonial Army-Navy captain's coins to Iraq, but they never made it back home with him. Alex Moore left them somewhere on a battlefield outside Baghdad. From Michie Stadium at West Point to the New Jersey Meadowlands to the Middle East, this is the burden of an Army football player: As a Lieutenant and a lineman, duty calls for leaving so much on so many fields.

Adrian Wojnarowski is a sports columnist for The Record (N.J.) and a regular contributor to ESPN.com. His book, The Miracle Of St. Anthony: A Season with Coach Bob Hurley And Basketball's Most Improbable Dynasty, can be pre-ordered before its February 2005 release. He can be reached at ESPNWoj8@aol.com.