Editor's Note: Tyrone Brown was part of Dick Tomey's Arizona's recruiting class of 1999. He was a two-way star at San Diego Morse High School and chose the Wildcats over Wisconsin and Arizona State. It was viewed as a very good class and Brown was expected to solidify the tight end position for the 'Cats. It didn't quite work out that way. This is his story.

One more note: Despite repeated attempts by ESPN The Magazine, John Mackovic declined comment for this story.

I found out on my two-way. A woman I know, one of the recruiting hosts, messaged me: He is getting fired. Just like that it all flashed through my mind -- his verbal abuse, his indifference to academics, his two-faced behavior.

John Mackovic getting canned was no surprise. Most people figured his time at Arizona was short since last November, when half the team met with school president to complain about him. I wasn't there, but I know what they said. And I know this: I used to be a tight end for the Arizona Wildcats, but I stopped loving football because of Coach Mackovic. 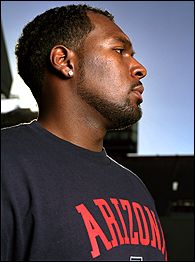 Growing up in San Diego, I never dreamed of playing in the NFL; I was using football to be the first person in my family to get a college education. I chose Arizona because I connected with then-head coach Dick Tomey. He was genuine. He met my family, sat on the floor, ate a piece of chicken. It's too bad Tomey was fired.

Unlike Tomey, Mackovic wanted all the power. He fired every coach who recruited me, and on his first day of practice, after two linemen jumped offsides, he said, "If I could trade every single one of you guys, I would." Kathleen Gabriel, our academic advisor, was someone we all loved. Her program made learning fun. We were a little scared of her, too, because she didn't take any stuff from us and wouldn't allow a player on the field until he took care of his classwork. Mac didn't like that. Soon, Kathleen was gone, too.

During my freshman year, I got strep throat. With Coach Tomey, a sick player would see the team doctor, who'd call the guy's position coach, who'd then tell the head coach. But I got a message on my answering machine from Coach Mac, chewing me out because "players don't do it like this." I was dumbfounded. When I got a concussion one time in practice. Coach Mac thought I was faking. Even after it was diagnosed, he was like, "Aw, you don't have a concussion."

I started missing blocks and dropping passes. I mean if I respect my coach, I'm willing to sweat blood for him. But if I'm being belittled, I just can't. Football is a two-way street. I know I wasn't the only one. A lot of guys on the team fell out of love with football, too. And it affected their concentration and the way they played.

The last straw for me was when I hurt my foot so that I was unable to run "The Mackovic Mile." ESPN had been in town working on The Season, a documentary about how Mac coached us. With the TV cameras rolling, he called me in for a meeting to tell me how unfortunate it was that I was hurt, but that he knew I'd get back soon and show off my skills. The next day he asked to meet a second time -- only this time the cameras weren't there. He flipped the whole script on me, making it seem like I was a problem child and saying he didn't want me in the program anymore.

I've always been the good kid, so I'd never been verbally abused like that before. I'm not saying Latrell Sprewell was right for choking P.J. Carlesimo, but now I can see how it could get to that point. I started to see a campus psychiatrist, Deborah Cox-Howard. I kept thinking, "Man, I'm letting people down back home." My dad was my biggest fan. It was his dream to see me walk up to get that diploma. But what I was going through with Mac made it hard for me to focus on studying.

When I first went to see Dr. Cox-Howard, I wasn't sure what I wanted to tell her or even if I wanted to tell her anything. But then, I found that I wasn't the first guy on the team to go to see her. She'd already counseled 12 others. I saw her every single day for a week, and then it was two or three times a week.

She and I thought it might be a good idea for me to apply for a medical hardship. But the school gave us the run-around, then told us our request was denied. When Mackovic found out I was talking to a psychiatrist he was very upset. He said I shouldn't talk to anyone outside the football program. I looked at him like, you're the reason why I need to see someone.

He told me, "We don't need outside distractions messing up our bond," and gave me an ultimatum: drop therapy or quit football. The next day, I got up at 5 a.m. as always, to get ready for my workout. I grabbed my gym bag and ran outside to meet my ride. That's when it hit me -- it's over. It was like waking from a bad dream. Leaving the team was the toughest thing I've ever done, but my father once told me, when it stops being fun, don't do it anymore.

And just like that, my life changed. Suddenly, I didn't have a scholarship, I was just another "typical" student. I felt like a grain of salt. I didn't know where to start. I told myself I wasn't going back home without a degree, so I took a year off to make enough money to pay for college. That's why I'm still in Tucson. I do think about how much stronger I am because of what Coach Mac put me through. I never called anyone on the team about his being fired. I already knew what the guys must have been feeling: satisfaction. They know the AD is getting them a new coach. Me? I won't be satisfied with the AD understanding what I've been through. I need to finish what I started at Arizona. Next semester, I begin classes at Pima C.C., where I'll start working toward a business degree.

This might be shocking to you, but I wasn't happy Coach Mac got fired. I never wish anything bad on people. I only wish everyone the best -- and it's best he's no longer a coach.

Bruce Feldman covers college football for ESPN The Magazine. E-mail him at bruce.feldman@espnmag.com.