What a mess. And damn right, as an alumnus of the University of Colorado and a member of the school's History Department Advisory Board, I'm mad and embarrassed about the Buffalo football program scandal.

One of the problems, though, is that I can't direct my anger at a single person or entity. There not only is plenty of blame to go around, but there is far more ambiguousness and murkiness involved than those searching for simplistic answers are willing to acknowledge.

However, if you consider the football team as the marquee representation of your alma mater, is your school, and your program, really any different?

Without trying to run through a checklist of all the alleged transgressions at Colorado, could a program running amok happen at "your" school?

I'm here to say it could. Maybe it already has -- and you just didn't find out.

Amok doesn't have to mean mounting allegations of sexual assault by football players, as is happening at Colorado. Amok doesn't get into that most reprehensible of territories. So, yes, it's a matter of degree.

Buffaloes coach Gary Barnett should be fired. The decision to place him on administrative leave, with pay, is a copout -- an inadequate and embarrassing (there's that word again) move tied to the potential legal complications and the contractual obligations to him and his staff.

It is absurd to say that Barnett has to go, because of events that happened under his watch, and then essentially keep his staff in place.

And if Barnett is culpable, so are the men under him who have operated with the interaction inherent in the coaching staff work process. All of them are culpable. If Barnett goes, so must them all. Every single one.

It would be messy and expensive, and university lawyers would tell me anyone in a position of power would be nuts and irresponsible to do it.

It also would be the right thing to do.

While I'm saying Barnett must go, I'm not buying into all of the charges being leveled at Barnett and his program. Not yet, anyway. Perhaps this will strike you as hypocritical. If so, so be it.

I happen to like the man, and I've talked with him about when he was happy as the coach at Air Academy High and enjoying working with kids. The job he did at Northwestern was amazing. I happen to believe he's a good football coach, and to blindly accept everything being said -- whether in lawsuits, depositions or on magazine paper -- is unfair.

In many cases, many of those attacking him are ridiculously naïve about the nature of both college life and major-college football -- whether in Boulder or anywhere else.

It's ridiculous to assume that Barnett or his coaches should hold the hands of all football players 24 hours a day. Nobody did that for me when I was in college, and nobody does it for a drama major either.

Many of the same folks now getting high and mighty and moral, and I include myself in all of this, are the same ones who would -- and do -- jump all over coaches for "not getting the job done" if they recruit only exemplary students and solid citizens, instill discipline in the program, have everyone on track for graduation, and then go 3-8.

The issue now is that Barnett's ability to function with any credibility and effectiveness as not just the football coach, but as the highest-paid employee of the university, is shot.

So Barnett must go.

One of the things any good football coach has to do if he is a good teacher is stand in front of 115 or so players and drive home the points that sometimes life isn't fair, and that accountability is one of the most honorable elements of life.

CU has become a joke around the country. I care a hell of a lot more about that than whether the Buffaloes beat Nebraska. Or Baylor.

I wish we all would be more concerned about what's going on in Hellems Hall, the major arts and sciences building, than Folsom Field.

Does that sound as if it's coming from an anti-athletic zealot?

On the contrary, I love college sports and what they can do for men and women, and I have seen that first-hand -- even for men who went through typical travails of college students, were offered second chances, and straightened themselves out.

I'm offended and angry that so many in the media and other walks of life find it so easy to ignore the fact that a football team is an eclectic group, and to lump all 120 players together as ill-behaved "jocks" is as offensive as espousing other stereotypes that, if used in print, would cause otherwise calculatingly politically correct columnists to be called on the carpet, or even fired.

If one band member makes an ass of himself, we don't consider it an indictment of everyone in the band.

So I admit I'm torn. I can poke some holes in my own argument. I'm holding Barnett more accountable than the band director. But I'm offended that college coaches' salaries now are closer to those of Fortune 500 CEOs than tenured history professors, and I think that has encouraged coaches to cease being educators -- which is what they used to be, even if the education was more about life's lessons than trigonometry. 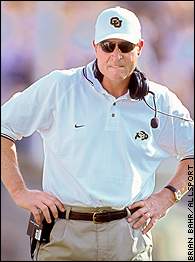 This got started because of allegations of sexual misconduct and assault at a 2001 party attended by football recruits and players. No charges have been filed, but lawsuits have.

As disgusting as it might have been, things like what happened at that party happen every weekend at Boulder and many other campuses. Football players don't have to be within blocks of the party. College men and women get drunk and do act stupidly, repugnantly and maybe even illegally. But that's a societal problem, and it has been for decades.

Where it gets murky is that when Barnett and his staff told recruiting escorts to show recruits what college life would be like in Boulder, but to behave while obeying a 1 a.m curfew that many other schools don't impose, what could be inferred?

If it came with what amounted to a leering wink, and blinders donned by the coaching staff at the university recently named the top party school in the country, then that's reprehensible.

But it isn't that simple, and the allegations of sexual assault at the party aren't backed by sufficient evidence for the district attorney to bring charges. I don't know what happened. Neither do you. And, sorry, you might not want to know what recruits have done at other schools, either.

The issue is whether at CU, what happened at that party was an
inevitable outgrowth of a calculated football coaching staff policy to
tantalize recruits with alcohol and sex.

A CU investigation is supposed to get to the bottom of that. My
inclination is to give Barnett the benefit of the doubt on it.

Katie Hnida? Her rape allegation about one unnamed teammate at an
apartment should never have been printed without some form of corroboration, because it involves placing all of her teammates in the suspect category. If she was raped and the rapist is identified, the player should be prosecuted -- and maybe emasculated. At that point, it doesn't matter whether he plays football or the clarinet.

Still, it isn't insensitive to say that that incident isn't as
germane to a judgment of Barnett's watch and the CU football program as
whether the kicker was the victim of heinous maltreatment from her teammates on the field and otherwise within the daily operation of the football program.

That's Barnett's watch, and where he has direct responsibility and influence. If she was victimized as horribly on the field and in the football building as she says, and Barnett didn't know about it, he -- and those assistants -- were shamefully stupid and insensitive. If they knew about it and didn't stop it and punish those responsible, that's even worse.

On Tuesday night, as he felt himself backed into a corner, Barnett lashed back. He said that not only was Hnida a girl, she was a terrible kicker. It was a stupid thing to say, because it just wasn't necessary within the context of sexual assault issues. But know what? For that to be cited as the catalyst for Barnett being placed on administrative leave is ridiculous. Fact is, she was -- and is -- a terrible kicker, within the usual evaluation standards of college football. It's the truth. Can't we handle that? Can't we accept that it has absolutely nothing to do with judging the alleged heinous behavior of some of her teammates?

Having her on the team was a social experiment that gibed with the Boulder political and social atmosphere, and if Barnett had cut her sooner, maybe none of this would have happened. But he also would have been ripped for being insensitive.

As the charges kept piling up, the most potentially damning one came down Wednesday. It was far more important than anything Barnett said about Katie Hnida. And that was that Barnett allegedly tried to intimidate a woman from reporting a sexual assault by a player, saying he would back the player 100 percent if she did so.

It has gotten to be too much.

Terry Frei is a regular contributor to ESPN.com. He is the author of 2002's
"Horns, Hogs, and Nixon Coming," about the landmark 1969 Texas-Arkansas
football game; and of the upcoming "Third Down and a War to Go," about the
1942 Helms Foundation national champion Wisconsin Badgers.