So the lineup for the happy new Harris Interactive College Football Poll has been released, and what a spectacular group it is. 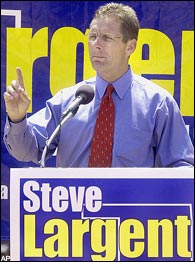 First, the good news. No current coaches to help skew the results to benefit themselves, their conference or their friends. Of the 23 listed media members, only a few are certifiably crazy (and you know who you are). And according to BCS big-hat Kevin Weiberg, the group is statistically valid.

Whatever the hell that means.

Still, there are questions to be asked (and typically, not answered), as in, "How many games do you think Terry Bradshaw is going to watch on a weekly basis?"

I mean, he does not seem to throb with work ethic, although that could just be showbiz in action. Not only that, he is still one of the talking heads on the Fox NFL pregame show, so most of his attention will be aimed at the pro product (and if the Steelers get a first-place vote, we'll know why).

This, though, is not to pick on Bradshaw. Steve Largent, for example, is a former Republican congressman from Oklahoma who ran for governor in 2002, which suggests that his potential constituents will want to know each week if he had Oklahoma first, Oklahoma State second and Tulsa third, or another way around.

In fact, the poll, like all polls (including the Associated Press poll, of which the idiot you are reading now is a member) presumes, typically erroneously, that the voter is actually watching the games involving the teams he may be voting for. This idiot was good for six a week, which is as much as the ophthalmologist would allow, and still had USC behind Oklahoma until Jan. 4.

If you must have polls, and apparently you must, the voters should either be clean or at the very least transparent. We cannot know with any certainty whether Spike Dykes will have his kids vote for him, or whether Craig Morton uses a dartboard, or whether Joe Biddle randomly selects teams each week by spitting while thumbing through the pages of the Blue Ribbon College Football Annual -- everybody has a system, for good or ill, and yes, even willful neglect is one.

But the thing that got the ESPN/USA Today coaches poll into such trouble last year (and deservedly so) was the coaches' adamant, even pigheaded refusal to release their votes to the public, as though their word, like that of God, is not subject to review from the protoplasm farms below. You could be more arrogant than that, I suppose, but you'd have to be Dennis Kozlowski to manage it, and he's spending the next few years in the jug.

If the Hiccup plans to be even remotely close to legitimate, its votes should -- no, must -- be made public each and every week. Their work has to stand up to some form of scrutiny, if only to show that its members are actually taking it seriously. If, as a hypothetical example, Brentson Buckner votes Clemson No. 1 every week, that may help him with his fellow Clemson alums but it shouldn't make him immune from the scrutiny of the outside world.

Keep in mind, oh children of the corn, that the Hiccup only happened because the coaches wouldn't release their votes after some extraordinarily suspicious voting in the last couple of weeks. The AP voters, who may be clinically insane but at least are willing to let their votes be known, were left holding a suspicious-looking bag that the AP ultimately abandoned (after the usual sanctimonious after-the-fact posturing, of course), and ESPN decided to separate itself from the coaches' vote. Who knows? Maybe the smell got to it at last.

The point is (and you thought we'd never get to it) that the Hiccup needs to change its rules and release its members' votes every week. If this means a few extra e-mails, well, Bradshaw has an intern to field them, and everyone else knows how to mass-ignore the proles -- it's control-shift-arrow, and then hit the delete.

For instance, I received many E-mails from distressed Auburn fans who saw their team squeezed out of the national championship debate for no better reason than having a lower preseason profile and the two teams ahead of it never losing. But a remarkable thing happened -- nearly every message from an aggrieved Tiger fan was actually rational, respectful and almost entirely devoid of expletives.

And those that were not -- well, it's control-shift-arrow, then hit the delete.

It was really quite harmless, and in some cases educational, and it didn't take all that much time at all.

Measure that against the suspicions the coaches will have to live with -- that they rig their votes, or leave them to others, or just flat don't give a damn.

The choice seems clear. Of course, it seemed clear last year, too, and look how well that worked.

The poll will be wildly imperfect, but at least it can't be called dishonest, unless a cabal of voters develops beneath the radar to get UTEP into the national championship game at 4-7.

And if that happens, Don Maynard is way too powerful to be wasting his time on silliness like this.

Ray Ratto of the San Francisco Chronicle is a regular contributor to ESPN.com