As a 5-year-old, Joe Tereshinski III showed up at Georgia football camp. When he got a little older, Joe T. buzzed around Garrison Hearst like one of those practice-field gnats. He played catch with quarterback Eric Zeier. It's one of the perks you get when you're a coach's kid and a third-generation Dawg.

Joe Tereshinski Jr. is the assistant strength coach and video coordinator at Georgia. He started at center for the Bulldogs in 1975-76. His dad, Joe Sr., played end for coach Wally Butts before and after World War II and went on to play eight seasons for the Washington Redskins. Joe Sr. roomed with the great Charley Trippi, the 1946 Heisman Trophy runner-up.

More important, Joe Sr. never forgot the debt he owed Georgia for getting him out of the Pennsylvania mines. He instilled that love in his son and his grandson. 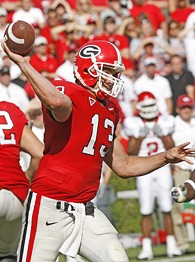 "This game," Joe Tereshinski III said Wednesday," is probably the game I dreamed about the most."

It's the dream that a lot of little boys in Georgia have, the one where they start at quarterback against the Florida Gators in Jacksonville. Because senior starter D.J. Shockley has a sprained knee, Joe T. will get his first start as a Georgia quarterback Saturday at Alltel Stadium against Florida (5-2, 3-2 SEC). Georgia comes in undefeated (7-0, 5-0).

"If I ended up at Florida," Tereshinski said, "I might not have been able to come back to Athens or to [Washington] D.C., where my granddad lives."

When Harvard got a look at his transcript, Harvard came around.

"He wanted to go to med school," Joe Jr. said. "Harvard was talking to him. He told me, 'It's not where you go to school. It's what you do with your education.'"

Yeah, yeah. But Georgia? Over Harvard?

Every visit to another campus ended the same way. Tereshinski shook hands with the coaches, got in the car, looked at his dad and said:

"I want to commit to Coach Richt tomorrow."

In February 2002, David Greene had just been named SEC Freshman of the Year. Richt also got a commitment from Shockley, one of the best quarterback recruits in the nation. When Joe Jr. pointed these two facts out to his son, Tereshinski III didn't back off.

"I'll either beat David Greene out," Tereshinski said, "or Georgia will be better."

Shockley, the recruit with the reputation and the skills, spent three years refusing to sulk about being behind Greene. Tereshinski, behind both of them, handled it in his own way. He refused to be satisfied with running the scout team.

"He found a way to play," Joe Jr. said. "I told him, 'You made this decision with your heart and not your head. Now you've got to live with it.' He's learned a great lesson for life."

As a redshirt freshman in 2003, Tereshinski served as deep snapper against Clemson. Last January, in the Outback Bowl against Wisconsin, he filled in again as deep snapper. He spent the 2004 season as the personal protector for punter Gordon Ely-Kelso.

"I wanted to be on the field helping the team as much as possible," Tereshinski said. "If that meant being on special teams, so be it. I was out there trying to earn a letter."

The coaches noticed. Tereshinski got that letter last season. More important, the other guys in the locker room noticed.

"You don't see most quarterbacks on your Pride team," said free safety Greg Blue, referring to the Bulldogs' punting unit.

"Joe's one of the toughest guys on the team," center Russ Tanner said. "In practice, when we don't have pads on, he tries to lower his head and smack somebody. He's a tough kid who wants to play."

He starts as a quarterback for the first time, and it's against the archrival. You would think that a quarterback who signed up for special teams would know exactly what his role is. Richt spoke in terms of tailoring his game plan toward Tereshinski.

"He's also prepared because he's been in our system for four years and he's gotten an awful lot of work in practice," Richt said. "He's gotten a ton of reps. Can he take those reps and turn them into success on the field in a game like that? I don't know. But there's no one man who can beat anybody, so we've got to play together as a team."

That is the answer. It could be a fairy-tale ending. A young man realizes his dream and leads the Dawgs to victory. It could be just an ending, especially against this Florida defense.

Or it could be a beginning. Shockley is expected to start for Georgia in its next game, against Auburn on Nov. 12, but the Dawgs need a starting quarterback next year. He may have blocked for the punter, but the little kid who played catch with Zeier, the product of three generations of Tereshinskis at Georgia, makes his real debut on Saturday.