TUSCALOOSA, Ala. -- There has been no one like linebacker DeMeco Ryans at Alabama in a generation. The awards have been arriving since last spring -- this one local, that one national -- yet the same aw-shucks grin spreads across his face now as when he arrived on campus in the summer of 2002.

"I've been working with football programs for 20 years," says Alabama's Jon Dever. "He's by far the best student-athlete I've ever dealt with." 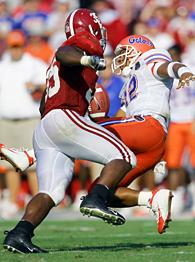 Ryans might be a shoo-in for All-America, a Butkus Award finalist and the leader of the defense that has carried the Crimson Tide to a No. 4 ranking as it prepares for its SEC West showdown here Saturday against No. 5 LSU.

But Dever is the assistant athletic director for student services: the brain coach. The awards are for Ryans' academic work. There's more to the senior than a stat sheet. Last spring, Ryans won the Bryant Award, given to the Alabama male student-athlete who has performed better academically than anyone else in any sport.

"I did not have him in class," Dulek said. "He blew the socks off of people who came into my office with his quality as a student. He's got a really high grade point average. We're really rigorous with our grades. He's in the top 3 percent of our class. We've got a good school, and he's blowing it out."

As the NCAA debates whether to grant a fifth year of eligibility -- because five years to graduate has become the norm and not the exception in the pressurized, demanding world of major college football -- Ryans earned his degree in 3½ years.

Ryans also will be honored next month in New York as one of eight Division I-A scholar-athletes awarded $18,000 postgraduate scholarships by the National Football Foundation. No Crimson Tide player has won that scholarship since quarterback Steadman Shealy in 1979. As a scholarship winner, Ryans becomes a finalist for the Draddy Trophy, the "academic Heisman."

In the wake of its near-death-penalty experience with the NCAA and the revolving door on its head coach's office, the presence of Ryans has made Alabama's rise to a 9-0 record and a No. 4 ranking all the more heartwarming. Not only has the Crimson Tide returned to prominence, but it has done so with the right kind of players.

"He doesn't have to tell you how good he is," Alabama defensive coordinator Joe Kines said. "He just goes and plays. He doesn't talk."

Ryans' teammates call him "coach," a teasing measure of respect for an upperclassman who demands that the players who locker near him throw their used athletic tape in the garbage can, not on the floor.

"I tell them to pick the stuff up off the floor," Ryans said. "I tell them what to do most of the time. I just let them know, tape and stuff on the floor, pick it up and save that janitor or manager the trouble of doing it."

He is a student that professors pine for. He is a model citizen.

"I love him like my son," said Kines, a bagel of a football coach -- crusty on the outside, soft and warm underneath. "He's what college football is supposed to be about."

But if you think Ryans the person is impressive, wait until you see him play. If you can't find No. 35, just look for the ball. Ryans won't be far away. He has made 59 tackles, which leads a defense that is first in the nation in points allowed (8.2 per game) and ranks no lower than seventh nationally in the major defensive statistical categories.

When coach Mike Shula arrived in Tuscaloosa in the spring of Ryans' sophomore year, he said, "The first thing [Kines] said to me was DeMeco has a chance to be the best linebacker that's ever been here."

That made an impression on Shula, if only because Kines coached at Alabama two decades ago, when Shula played with Cornelius Bennett and the late Derrick Thomas. "He [Ryans] has been a true leader on and off the field," Shula said, "and one of our most respected players for what he does and what he stands for."

Ryans is a technically proficient linebacker, which is why he has delivered some of the more memorable hits by the Tide this season. That's what happens when you arrive at the ball carrier with your shoulders square and launch your 6-2, 232-pound body at the guy with the ball.

That's also why he has played in all 47 games of his collegiate career, starting the last 35.
It turns out that his proficiency in the classroom applies to the field, as well. Early in the game, Ryans will almost lean in over the defensive line, listening to the quarterback's signals.

"In football, instincts take over," Ryans said. "Having a knack for the ball. You just notice certain things. I watch tendencies on what the offense will do, not just by watching film. Offenses can come in and change their whole tendencies. I look at it when they first come out. I pick up the signals they are calling. Against Middle Tennessee and Southern Miss, I picked up what they were saying. It was telling me they were going to run the ball to the weak side. We picked up on that and knocked them in the head."

Ryans smiled. "They stopped calling it."

That's about as close to bragging as Ryans will ever get. That his lack of ego stands out says something about the era in which we live. The stereotype of the modern athlete includes preening and extensive usage of the first-person singular, unless the athlete refers to himself in the first-person plural.

That's not Ryans. Professor Lou Marino taught Ryans in a Negotiating class last summer. Marino has taught the class for 10 years. He has seen would-be entrepreneurs strut in with no shortage of ego. He has seen football players come in and bully their way to results.

"That never happened with DeMeco," he said. "Everything he got, he earned. He has a quiet self-confidence. In 10 years, the way he comes across is singular. He had done his homework. He was prepared. He had thought things through ahead of time. No matter if he did well or if he did poorly, he'd wait to be asked for his opinion. He was never one to brag. He just let his performance speak for itself."

His performance nearly didn't speak loudly enough to get him a scholarship to Alabama. In a time when schools begin tendering their offers in the spring of a recruit's junior year, former Alabama coach Dennis Franchione didn't offer Ryans a scholarship until mid-November.

"Two or three high school coaches kept telling us, 'He makes every tackle for Jess Lanier [High School in Bessemer, Ala.]. Why in the world is Alabama not wanting him?" Tide director of football operations Randy Ross said. "So we got tape. He got every tackle. He's still making every tackle."

"Growing up, I was always an Alabama fan," Ryans said. "If I had the opportunity to come here, this was the place. It just felt like home. It felt like the place where I needed to be."

Added Ross, "There's always one in every class. You hem and haw and can't decide, and that guy ends up being the leader."

That leadership manifested itself from the day Ryans set foot on campus. He recalled how his mother, Martha, drove him the 45 minutes down I-59 from Bessemer to Tuscaloosa.

"A lot of guys were taking tennis and volleyball and jogging [as classes]," Ryans said. "I was like, 'My mom had to pay $500 tuition and buy books. I can't waste the money.' I took precalculus."

Ryans' attitude toward his education has more to it than respect for the money his mother earned while working two jobs (the NCAA now allows freshmen to enroll in the summer prior to their first fall at the school's expense).

"To me, it's something I have to do," Ryans said. "That's why we're here. You are here. You get a free education. You're not here to waste it. Why not put effort into it? A lot of people want to have the opportunity to come to college and get a free education. You see some athletes wasting it [who] just don't care about it. Other people want to be in your shoes but they can't. It's not here for you to just waste it.  You look at all the other students who have jobs. They are paying their way. We get it free. That's why we're here."

And now we return to our regularly scheduled programming, where athletes are coddled and shepherded to, from and through class. A guy like Ryans doesn't conform to the worst fears -- and occasional realities -- of college athletics.

"We discovered with him," said Dever, the Alabama assistant athletic director, "it's never things we can do for him. It's the things he wants to do for himself. When I first met him, he knew what he wanted to do, as a true freshman. 'I want to graduate in four years. I want to go to summer school every summer to get ahead of the game. The most important thing I want to do is get my degree.' He's just got a little extra."

On the day before the Tide's opener against Middle Tennessee State, four days after Hurricane Katrina savaged the Gulf Coast, Ryans stood up in the team meeting. You have to understand, Ryans makes speeches about as often as he misses assignments. He announced that he would be donating his $27 per diem for game day to the American Red Cross.

That donation is a sacrifice for any scholarship player, many of whom have nothing but lint in their pockets. Ryans asked for a show of hands as to who would join him in donating. Every hand in the room went up. Shula matched the total, and Alabama raised more than $3,000 for hurricane relief.

There is a tendency to underappreciate the guy who does everything right, to let his light be hidden under the bushel of troubles that grab headlines in college football. When Ryans graduates next month, he will leave a legacy unmatched in the storied history of this campus.

He's a pretty good linebacker, too.