JACKSONVILLE, Fla. -- With just over five weeks left before the start of the college football season, coaches around the country are scrambling still to get a grasp on the new instant replay system that goes into effect across Division I-A this year. Last season, all but two of the 11 Division I-A conferences used some sort of instant replay system, although it varied from league to league.

The NCAA rules committee voted in February to require conferences to use a universal review system and give coaches one challenge. But not until Monday did ACC coaches learn exactly how the challenges would work. A coach must call timeout to challenge a play. If the call is reversed, the coach gets his timeout back, but still can't challenge another play in the game. If the call is upheld, the coach loses the timeout and challenge.

"I'd rather have one than none," Clemson coach Tommy Bowden said.

Bowden said he would spend the next few weeks developing strategy with his assistant coaches. For instance, Bowden wasn't sure whether he'd use the challenge on a controversial play near the end of the first half, or save it in case another questionable call happened late in the game.

"If there's one that's critical at the end of the first half that's a momentum swing, do you use it or save it for the second half in a close game?" Bowden said. "There's going to be some strategy involved that no one in college football is used to because we've never had it."

Boston College coach Tom O'Brien, who said he was in favor of using instant replay, said his concern was that offering coaches more than one challenge would lengthen games even more.

"When you're standing on the sideline for three hours, 25 minutes, it can be rough on your back sometimes," O'Brien said. "Most of the time, it's the TV guys and their long commercials. The NFL had the same problem, but they figured it out."

The new replay rules still don't allow TV monitors to be placed in coaching boxes, so O'Brien said coaches would have to rely heavily on the replays being shown on scoreboards.

"I hope if it's your home guys, they'd put up a good view for you," O'Brien said.

Groh: Plan in place for Cavaliers
Few college football coaches have endured as tough of an offseason as Virginia's Al Groh. After the Cavaliers finished 7-5 in 2005, Groh lost four assistant coaches, including both his coordinators -- offensive coordinator Ron Prince was named coach of Kansas State and defensive coordinator Al Golden left for Temple. In March, Groh dismissed three potential starters, including linebacker Ahmad Brooks, a 2004 second-team All-American who played sparingly last season because of knee and back injuries. Then Groh learned that eight of the Cavaliers' 24 signees either failed to qualify academically under NCAA rules or were denied admission to Virginia. 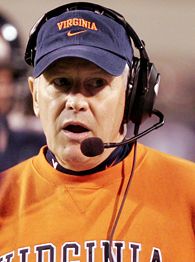 Groh said the staff turnover was unexpected, but puts a positive spin on it because Prince, Golden and former associate head coach Danny Rocco (now head coach at Division I-AA Liberty) were named head coaches. Brooks had been a problem child since signing with Virginia, spending one year at Hargrave (Va.) Military Academy after failing to qualify as a freshman and battling weight issues throughout his college career. Groh also said losing one-third of his highly ranked recruiting class wasn't completely a surprise.

"I wouldn't say it took a hit," Groh said. "I'd say it followed the plan. We and each one of the individual players were all aware of potential circumstances."

One of three players dismissed in March, starting safety Tony Franklin, a team captain last season, could be reinstated to the team before preseason practice begins next week, Groh said. Franklin, a senior from Cleveland, was cited in December for misdemeanor possession of marijuana and didn't play against Minnesota in the Gaylord Music City Bowl. Asked what would determine whether Franklin rejoined the team, Groh said: "My discussions with Tony.  We'll have to see. I'm not putting any percentages on it."

The Cavaliers, who lost starting quarterback Marques Hagans, All-American offensive tackle D'Brickashaw Ferguson and six other starters, could get safety Nate Lyles back. The junior from Chicago was one of Virginia's most promising players before injuring his neck while tackling Georgia Tech tailback P.J. Daniels. Lyles missed the team's last three games and wasn't expected to play football again. But doctors apparently have cleared him to participate in practice, and Groh was scheduled to meet with Lyle's surgeon this week.

"Right now, we're anticipating him to be part of the first session of training camp," Groh said. "When dealing with a player who has had a neck injury, we want to be very thorough and have all the information we can get." 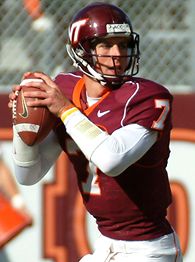 "We came out of the spring with an order," Beamer said. "We'll see if anybody got better. To name a starter early will be the best thing for the football team and the quarterback."

Beamer said he planned on naming a starter after about a week of practices. Whitaker, who missed part of spring practice after being cited for underage possession of alcohol, was still in the mix, Beamer said, along with Holt, who was Vick's backup in 2005 while Glennon redshirted. Boone, who weighs more than 250 pounds, will work at quarterback and tight end.

The Hokies will have an abundance of quarterbacks in 2006. Tyrod Taylor of Hampton High School in Hampton, Va., rated one of the top five quarterbacks in the country by most recruiting services, verbally committed to Virginia Tech last week. He chose Tech over Florida and Southern California.

Extra points
O'Brien said Boston College might struggle to develop a natural rival in the ACC because the school is located so much farther north than the rest of the teams in the league. "It's something we've always fought," he said. "Ever since Holy Cross dropped football, Boston College hasn't had a rival. Our school thinks it's Notre Dame, but they won't play us anymore." O'Brien said Boston College might try to develop an annual series with Syracuse in the future.  Florida State coach Bobby Bowden isn't underestimating the loss of highly regarded sophomores Kenny O'Neal and Fred Rouse, who were dismissed from the team during the offseason. Rouse caught six passes for 114 yards last season, and O'Neal returned 21 kickoffs for 503 yards. "We lost two great prospects," Bowden said. "What did Philadelphia lose by losing T.O. [Terrell Owens]? That's what we lost."  Miami coach Larry Coker said he approved five schools that sophomore linebacker Willie Williams could transfer to, but Coker declined to identify them. Williams, one of the most heralded recruits in the country in 2005, requested to be released from his scholarship at Miami earlier this month. He was admitted to the school despite a laundry list of criminal offenses. "If he wants to go to those schools, he can go," Coker said. "He can't just go to any school." Coker said he didn't give Williams a deadline for deciding whether to stay or transfer. "Willie Williams is not a factor," Coker said. "He's a third-team linebacker. Let's talk about some guys who are going to play."  Former Georgia defensive coordinator Brian Van Gorder, now coach at Division I-AA Georgia Southern, has picked up more than a half-dozen Division I-A transfers, including defensive lineman Brandan Daniel, receiver Michael McIntosh and defensive back Dwayne Grace from Florida and linebacker Tavares Kearney from Georgia.  Tommy Bowden said star defensive end Gaines Adams returned for his senior season because the NFL underclassman advisory committee projected him as a fourth-round draft choice. Some NFL draft analysts believed Adams might have been a first-rounder. "The sheet from the NFL said completely the opposite," Bowden said.