He had been stuck in his quaint quarters for the duration of Notre Dame's annual Blue-Gold game, unable to see or hear what had been taking place on the field. So in the final minutes of the fourth quarter, when the elevator filled with writers, fans and boosters eager to make an early exit, he pounced.

"How did the quarterbacks play today?" he asked. "What about that Clausen kid?" 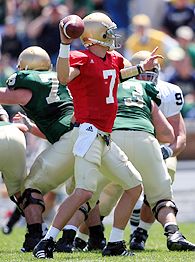 The people in the jammed elevator looked at one another and shrugged. They weren't being rude, they just didn't know what to say. Freshman quarterback Jimmy Clausen's play was, well, unremarkable. Which is just the way Charlie Weis wanted it.

The Notre Dame coach has been tight-lipped about his four-man quarterback competition throughout spring practice and Saturday's game did little to unveil more.

One year after Clausen used the Blue-Gold game to announce his commitment to the Irish by arriving at the College Football Hall of Fame in a Hummer limousine, the 2006 USA Today Offensive Player of the Year was pedestrian in his on-field debut for the Irish, completing 3-of-7 attempts for 23 yards.

So, too, were the three other players competing with Clausen, who graduated high school a semester early allowing him to join the Irish this spring, for the right to replace Brady Quinn this fall. Clausen and sophomores Demetrius Jones and Zach Frazer and junior Evan Sharpley combined to complete 11-of-25 attempts for 77 yards, one touchdown and two interceptions.

What does it mean? At least two more weeks of angst for ND Nation, before Weis announces after Memorial Day the two candidates who will compete for the starting quarterback job.

After the game, none of the quarterbacks were made available to the media, but honorary coach Ara Parseghian was. And he came away impressed.

"One of those guys will emerge and be talented this fall, that's my opinion," he said. "They've got enough good arms."

Weis said he has committed himself to running the football in 2007 which is why, he said, the two Notre Dame teams combined for 54 runs against just 25 passes in Saturday's scrimmage. Weis rotated all four quarterbacks on each series Saturday, with Sharpley and Frazer playing for the Gold team and Clausen and Jones for the Blue. The Gold defeated the Blue, 10-6 in front of a Notre Dame spring game record 51,852 fans.

On the few occasions the quarterbacks did throw, their passes were short and safe. The longest completion of the afternoon was Jones' 15-yard touchdown pass to Robby Parris. Jones' arm was hit on the play and the ball was underthrown, but Parris adjusted to make the catch and take the ball into the end zone.

Clausen threw a 13-yard out, also to Parris. And Sharpley hit Konrad Reuland on an 11-yard pass early in the game. But that was it for completions over 10 yards.

"It's not easy to get a rhythm out there with the clock running and a new quarterback every possession," tight end John Carlson said. "So you can't really grade those guys."

Jones turned in the longest offensive play of the day, a 31-yard sprint on third-and-19 in the third quarter. But he also threw a careless first quarter interception that was returned 27 yards for a touchdown.

"Demetrius has got great speed. He's a very athletic guy," Parseghian said. "He has a little bit more speed and athleticism than the others in the hunt."

After taking some time off, Weis said he will review the tape and statistics from spring practice with his staff before narrowing his list of quarterbacks who will compete for the job this fall down to two. He admitted Saturday that he has been so meticulous with the competition that every single pass, "even the ones against the wind," have been charted. And the number of reps each player has had with the first team Weis said, "are within five."

The decision won't be an easy one. Jones, who has an ND shaved into the back of his head, switched from No. 4 to No. 3 this spring and welcomes the pressure that comes from wearing the same number as Joe Montana, Ron Powlus and Rick Mirer.

Frazer threw for a Pennsylvania record 3,674 yards and 27 touchdowns his junior year of high school and was rated the 12th overall prospect by USA Today in 2005. This spring he declared himself, "No. 1, hands down," in the ND quarterback derby.

Sharpley is the only one in the group to have thrown a collegiate pass, completing one attempt for seven yards last year. He clearly has the most college experience.

And then there's Clausen, who has found himself in a Powlus-like fishbowl since stepping on campus in January. From there came rumors of an elbow injury and then concern over whether or not he might transfer if he loses the starting job to a fellow underclassmen, he's the quarterback creating the most buzz around the ND Nation.

On Saturday, Clausen received a round of applause when he jogged onto the field for the first time. On his only passing attempt of the drive, he threw the ball away when no one was open.

"He's someone who plays with a lot of poise," Carlson said. "He's no different on the practice field with nobody out there than he was today."

Whoever wins the quarterback job, the shoes they have to fill are a size 16. Brady Quinn started 46 straight games for Notre Dame, setting 36 school records in the process. He's the only Irish starting quarterback Weis has known.

But that doesn't mean the Irish are panicked, no matter what they saw -- or didn't see -- during Saturday's scrimmage.

"Whatever happens, we're going to be fine back there," senior safety Tom Zbikowski said. "Coach Weis will have one of them ready to lead us against Georgia Tech. That's what he does. There's a lot of talent back there. And there's no doubt one of them will be ready."