BLACKSBURG, Va. -- On Virginia Tech's first offensive play in last week's opener against East Carolina at Lane Stadium, Hokies quarterback Sean Glennon took the snap and dropped back to pass. After surveying the Pirates defense, he threw to the right side of the field.

"I was like, 'Are you kidding me?'" Glennon said. "I'd been looking forward to that first pass for so long."

It had been more than eight months since Glennon last played, and the previous performance was one he'd rather forget. Against Georgia in the Chick-fil-A Bowl, Glennon helped lead the Hokies to a 21-3 lead in the first half. But after the Bulldogs cut Virginia Tech's lead to 21-13 in the second half, Glennon turned the ball over on each of the Hokies' next four possessions.

Georgia won the game 31-24. Glennon finished 13-for-26 for 94 yards with three interceptions and a fumble and faced a very long summer.

"I'm hoping people have kind of put that behind them by now," Glennon said. "That happens in football. The Heisman Trophy winner didn't have a very good bowl game, either. It happens."

But quarterback Troy Smith, the 2006 Heisman Trophy winner, didn't return to Ohio State after the Buckeyes were embarrassed by Florida 41-14 in the BCS National Championship Game. Glennon returned for his junior season and he figures to play under even more scrutiny this year.

Glennon, from Westfield High School in Centreville, Va., could go a long way in redeeming himself by leading the ninth-ranked Hokies to an upset victory against No. 2 LSU at Tiger Stadium in Baton Rouge, La., on Saturday (ESPN, 9:15 p.m. ET).

At the very least, Glennon knows the Hokies will have to play much better than they did against East Carolina. Virginia Tech had only 33 rushing yards on 31 carries and finished with only 278 yards of offense.

It won't be easy against LSU's defense, which allowed only 146 yards offense (10 rushing yards on 26 carries) in its 45-0 win at Mississippi State on Aug. 30. The Tigers' defense, led by All-American tackle Glenn Dorsey, had four sacks and six interceptions against the Bulldogs.

• Top defenses face off in the Bayou

"I know Dorsey is their poster boy, but I think four or five other guys could be poster boys as well," Glennon said. "They're solid from top to bottom. I don't think they have a weakness on their team. They're fast and talented across the board."

It will be a monumental challenge for a Virginia Tech offense that struggled mightily against East Carolina. The Hokies are still regrouping on the offensive line after right tackle Ed Wang broke his leg during preseason camp. Junior Nick Marshman moved from right guard to right tackle, and sophomore Richard Graham started at guard. Graham's only other scholarship offer after high school was an academic grant-in-aid from Princeton.

Playing behind the rebuilt offensive line, Glennon didn't have much time to throw Saturday; he was sacked four times by East Carolina.

"I thought offensively, it was just on one play it was this guy, the next play it's this guy and the next play it's that guy," Virginia Tech coach Frank Beamer said. "It wasn't just a drastic thing with one person. I don't think shuffling right now is the answer; I think getting better is the answer. We've got a pattern and we just need to get better with who we've got."

Beamer is taking the same approach with his quarterback. Glennon recovered from the early interception to complete 22 of 33 passes for 245 yards with one touchdown in the Hokies' 17-7 victory. Glennon was still criticized by some Virginia Tech fans, though, because the Hokies were so sluggish on offense.

Glennon, like most quarterbacks, has been the easiest one to blame at Virginia Tech the last two seasons. After replacing Marcus Vick as the starting quarterback at the start of the 2006 season, Glennon was largely inconsistent. He threw for three touchdowns in his first start, a 38-0 win over Division I-AA Northeastern, and had 301 yards and two touchdowns in a 36-0 rout of Duke two weeks later.

But Glennon also had fewer than 150 passing yards in eight of 13 games in 2006. The Hokies seemed intent on trying to win games with their ground attack and stout defense, which led the country in scoring defense, total defense and pass defense last season. 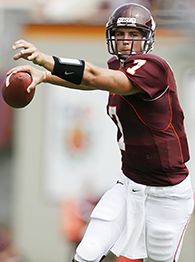 Many Tech fans figured Glennon was only holding the starting job until highly regarded freshman Ike Whitaker was ready to take over.

Then Whitaker checked himself into alcohol rehab during the 2006 season and played in only five games. The Hokies signed highly regarded recruit Tyrod Taylor, one of the country's top dual-threat quarterbacks, in February and it was assumed he could even unseat Glennon during preseason camp.

Glennon kept the starting job, and Taylor was named his backup. Whitaker was moved to wide receiver during preseason camp. With fan favorite Taylor right behind him, Glennon knows there is little room for error.

Things got better for Glennon after the opener against East Carolina.

While standing in the Virginia Tech locker room, Glennon received a phone call from New England Patriots quarterback Tom Brady. They had never met, but had a mutual friend in Boston. Brady wanted to call Glennon to congratulate him on the win.

"I think Tom Brady is a little more credible than a lot of the guys that have opinions on me, so it's nice to see," Glennon told reporters in Blacksburg, Va., earlier this week. "It's nice to have someone with obviously a very high football IQ give me compliments."

Things could get much better (or worse) for Glennon on the Bayou on Saturday night.

"I know backup quarterbacks are the most popular players on any team in the world," Glennon said. "Everybody thinks the backup can do what the quarterback isn't doing. I remember how everybody loved me when I was the backup."

Glennon has a chance to make Virginia Tech fans forget about the backup -- or become one himself -- Saturday night.