First, I want to say what a truly unforgettably powerful experience it was to share this past Saturday with the Virginia Tech community. It was a buildup filled with poignance and dignity, and as raucous a release of passion for a team's entrance as I've ever witnessed. I was proud that "GameDay" was able to
essentially stay out of the way and give viewers a sense of what it felt like to be there. A heartfelt thanks to all who helped us and provided insight into the deeper meaning of what unfolded on campus. We will see you there again. 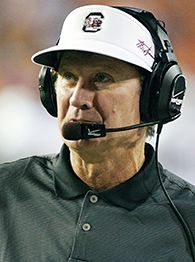 This will be a fun weekend, when perhaps a dozen or more games will help show us who's got what this season. It's about as deep a lineup of games in September as the modern scheduling practices will allow. Our "GameDay" bus satellite dishes will be stretched to capacity.

Since so many out there get giddy at the sight of Michigan and Notre Dame being embarrassed, there will be extra scrutiny on their attempts at redemption this Saturday when the Wolverines host Oregon (ABC, 3:30 p.m. ET) and the Irish hit the road to Penn State (ESPN, 6 p.m. ET).

Then there's the gutsy scheduling challenge taken on by Miami and Oklahoma (ABC, noon ET) and Virginia Tech and LSU (ESPN, 9:15 p.m. ET). Bravo. I love me a tough trench tug-o-war in which yards and first downs are hard to come by and these two games should fit the bill.

Saturday is the first Miami-OU collision since the Canes beat the Sooners 20-14 in the 1988 Orange Bowl, when Randy Shannon was a part of UM's smothering defense that keyed a national championship. He'd better tote that ring to Norman this week and hope the mojo rubs off.

My ace researcher Chris Fallica, class of '94 at the "U", says this matchup reminds him a bit of the 1985 collision in Norman. That year, Miami was coming off an 8-5 campaign and was unranked. No. 3 Oklahoma rolled in as the solid favorite. But Troy Aikman got clocked and knocked from the game with a serious leg injury and Vinnie Testaverde did enough to earn the Canes a 27-14 upset in front of a stunned Sooner crowd. Jerome Brown and the UM defense backed up the pregame barking.

The irony is that Oklahoma went to the Canes' home field later that season and beat No. 1 Penn State in the Orange Bowl, while No. 2 Miami simultaneously was stumbling in the Sugar Bowl to Tennessee, giving Barry Switzer his third, and final, national title. That bowl loss was bitter for one Jimmy Johnson, whose favored Canes compounded the frustration with the infamous Fiesta Bowl flop against Penn State the following season. All that back story made the eventual win over OU in the '88 Orange Bowl extra sweet. 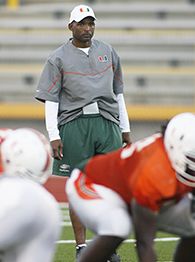 From 1985-87, Oklahoma was 33-3, with all three losses coming to that former coach at archrival Okie State, Jimmuh. Now, it seems, Johnson and Switzer are great pals and TV colleagues.

Now, another Canes team arrives in Norman as underdogs, coming off a season that doomed Larry Coker. The world is enamored with Oklahoma again. Can Shannon's crew shake up the championship chase and earn a signature win just two games in to his tenure? Is this Miami team capable of winning in a hostile house as a dog?

Remember, a few of the Miami vets were a part of the big smackdown of Marcus Vick in Blacksburg two years ago. Is my man Fallica on to something, besides alumni overexuberance? Maybe, but I don't share his faith that the Miami defense can be smothering enough to stay close while the Canes struggle for first downs. Miami represents, but falls short.

By the way, Sooner rookie runner DeMarco Murray's opening display was pretty impressive. The super recruit arrived in Norman with a high school highlight reel that rivals the celebrated Reggie Bush prep tapes. Murray can be seen cutting, swerving, spinning, accelerating, breaking the ankles of poor prep defenders and ripping off effortless looking TD runs. It's easy to find on YouTube and worth a look.

Miami's young back, Graig Cooper was solid against Marshall, so this game will feature a pair of future studs against stout, veteran defenses. Are they ready? Allen Patrick returns for OU, by the way, and he will get first crack at the Canes' front, featuring the freaky Calais Campbell.

What else can be said about Appalachian State's shining moment? It was a fun watch -- at least for those of us who are not aligned with the Maize and Blue. Then again, every coach I talked to you this week focused not on the joy of the underdog prevailing, but the misery heaped on Lloyd Carr. It seems all coaches can relate to the sickening feeling of not being able to get a team ready for an inferior opponent and being tagged with a shocking loss that will remain attached to his legacy forever. No one spoke of the euphoria of being Jerry Moore, just the heat of Carr's seat.

By the way, I have been told by reliable sources that it was possible to find a Vegas line on the game and that Michigan was a 28-point favorite. So, at least in point-spread terms, there have been a couple upsets in history considered larger. 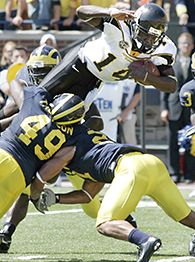 I am not totally convinced UM just pushes a motivational button and recovers to handle Oregon on Saturday. This kind of a stunner could create a hangover. There's a lot of negative energy floating around A-squared this week and it's not always easy to remain isolated from that. Plus, with the speed of Dennis Dixon at QB, the Wolverines defense certainly should remove the ankle weights they seemed to be wearing last week. Our resident Michigan Man, Desmond Howard, spotted early on that the Wolves were in trouble against Armanti Edwards' quickness at QB. He was not exactly going nuts in the bus with delight, but he was not as shocked as you might expect.

As for App State, the Mountaineers are enjoying a merchandising windfall. Merchandise is back ordered suddenly. Contributor John Lucasz points out that eBay has featured several exciting pieces of memorabilia, like a signed football from last year's I-AA title team going for north of $300. Must have been Buckeyes fans driving up bidding. For only $4.99, though, you can grab a T-shirt with "Appy Hour at the Big House" on the front.

Of course, further searches of App State lead you to a university recruiting video that is fast becoming an Internet sensation. It features a Broadway-style song performed by a choir, which includes a jangling guitar solo and lyrics proclaiming that the school is "Hot, hot, hot!" And how.

Lyrics also remind us that ASU (the eastern version) is "speaking the language of a brave new year  telling the world about a new day dawning, and spreading the spirit of a Mountaineer." Appalachian State is, according to the song, "as solid as a rock and proud as a peacock."

The production values of this video are a bit crude. But the lyrics, penned a few years ago, could not have been more prophetic about the little school from Boone's latest and greatest moment in the sun. Anyway, it's worth finding.

Now, it's the 'Neers who have to dodge the huge upset from little (Division II) Lenoir-Rhyne, coached by none other than Fred Goldsmith. He was the last coach to take Duke to a bowl game. Maybe the last, ever. Goldsmith also won at Rice. Taking over at the tiny school in Hickory, N.C., is an interesting twist in the career path for the guy Mr. Corso once implored on the air to take the first offer and run away from Duke fast, before his stock fell. Goldsmith didn't, and his stock did fall. Now, for a day, he's back on the map, thanks to the amazing 'Neers. One Lenoir-Rhyne Bear said that Saturday is the "biggest opportunity we'll ever have." Sound familiar?

If you were wondering, I did not include Michigan on by AP ballot. Is there really a coach out there voting Michigan No. 10 on their ballot? Wow.

Besides Michigan, Florida State (ugly stuff in Jimbo Fisher's debut), and Oklahoma State dropping off my ballot, I dropped these teams after struggles in their openers: Texas (from the top five to ninth), Virginia Tech (a couple of spots), and Auburn (Tigers very fortunate to win  thank you, zebras).

Moving up quickly: Cal, Georgia (early strength of rebuilt defense surprised me), Clemson and, of course, Georgia Tech (not on my preseason ballot, but now at No. 13).

I have no problem significantly reworking preseason rankings. Assessments of teams in August aren't worth much to me. I will rearrange my rankings a lot in September. I don't understand why more pollsters do not.

By the way, was that coach Weis' son, Charlie, a freshman in high school, standing near his dad last Saturday wearing a headset and relaying signals to the Irish defense via cards? Hmm. I've heard it was. Can't be confirmed because Charlie isn't talking to the Worldwide Leader this week.

I know the kid is really bright and probably inherited his dad's naturally sharp football mind, but that would be a pretty unusual role for a teenager, given that this is Notre Dame we're talking about not, well, Lenoir-Rhyne. Is he the Doogie Howser of the gridiron? I wonder if the NCAA would count young Charlie against the permitted number of assistant coaches?