ATHENS, Ga. -- As South Carolina coach Steve Spurrier walked off the field at Sanford Stadium with his Gamecocks leading 11th-ranked Georgia by a touchdown at halftime Saturday night, he was serenaded by a loud chorus of boos from the fans who have grown to hate him the most.

Spurrier, with a slight grin, waved back.

"They were giving me an ovation," Spurrier said. "Or was it boos? I was just acknowledging them. I didn't realize I was that important to them."

Spurrier gave Georgia fans another reason to hate him Saturday night, when South Carolina surprised the Bulldogs with a 16-12 victory in front of a sold-out crowd of 92,746.

Georgia, which had beaten Spurrier in each of his first two seasons at South Carolina, is the highest-ranked team the Gamecocks have beaten under Spurrier. And the victory went a long way toward validating Spurrier's belief that his team is ready to contend for an SEC East title.

"This wasn't shocking," Spurrier said. "This was not a shock to us that we won this game. This was two even teams, I thought."

Most SEC fans feared it was only a matter of time before Spurrier built the Gamecocks into a winner. He won six outright SEC titles and the 1996 national championship in his 12 seasons at Florida, his alma mater. After leaving Florida to coach the Washington Redskins for two seasons in 2002-03, Spurrier returned to the SEC in what seemed like the most unlikely of places. 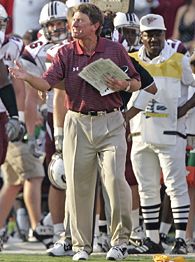 Now, in his third season at South Carolina, he is trying to do what many believed was once impossible: build the Gamecocks into a consistent winner.

By beating the Bulldogs, Spurrier can at least talk about winning the SEC, and some football fans outside South Carolina might even listen.

The Gamecocks beat the Bulldogs because of their defense. Georgia couldn't protect quarterback Matthew Stafford early in the game. Stafford couldn't hit open receivers late in the game. The Bulldogs were 3-for-18 on third down and didn't score a touchdown in six trips inside South Carolina's 35-yard line.

It was the first time Georgia failed to score a touchdown in a game since South Carolina's 14-9 victory here in 2001, which was the last time the Gamecocks beat the Bulldogs.

"We missed too many opportunities to make plays that could have made all the difference in the game," Georgia coach Mark Richt said. "To be truthful, I don't think it was because of a lack of effort out there. It was just a lack of ability to make plays when they were there. We missed open receivers, dropped balls here and there, and had a chance to wrap up some guys and didn't. We're all in this thing together. I'm not pointing any fingers. We had opportunities that we didn't make."

South Carolina wasn't much better on offense. The Gamecocks ran for 140 yards. Quarterback Blake Mitchell, who was suspended from last week's opener against Louisiana-Lafayette because he missed too many classes during summer school, was sporadic at best. He completed 20 of 31 passes for 174 yards and was sacked twice.

But the Gamecocks made more big plays than the Bulldogs. Georgia missed a long field goal on its first possession, and South Carolina went ahead 7-0 on senior Cory Boyd's 9-yard run late in the first quarter.

The Gamecocks got three field goals from Ryan Succop and kept turning the Bulldogs away.

"It shows we can win a big game," Mitchell said. "I could have played a lot better. If they had scored at the end, the offense really would have been kicking itself because we had a lot of opportunities."

As poorly as Georgia played on offense, the Bulldogs had a chance to tie the score late in the fourth quarter. With South Carolina leading 16-9 with less than six minutes to play, tailback Knowshon Moreno moved the Bulldogs to the South Carolina 11 with a pair of long runs.

But Stafford threw incomplete on his next three passes. He missed a pass to flanker Michael Moore in the end zone on first down, then overthrew tight end Tripp Chandler near the goal line.

On third down, Stafford fired to redshirt freshman Tony Wilson, who couldn't hang on when he was hit by safeties Brandon Isaac and Emanuel Cook.

Stafford, a highly regarded sophomore from Dallas, completed only 19 of 44 passes for 213 yards. He was sacked three times.

Stafford wasn't alone in blame. Richt also will be criticized for his controversial decision to kick a fourth field goal with less than five minutes to play instead of trying for a tying touchdown. After Stafford threw incomplete on third-and-15 from the South Carolina 16, senior Brandon Coutu kicked a 34-yard field goal to make it 16-12 with 4:42 to play.

Richt gambled that his defense would hold and the Bulldogs would get the football back with plenty of time and in good field position. But South Carolina picked up a pair of first downs on its next possession. Georgia took over at its 20-yard line with only 1:20 left. The Bulldogs got as far as South Carolina's 46-yard line, but no closer.

"If it was fourth and a little more reasonable, I probably would have gone for it," Richt said. "But fourth-and-15, the odds are not good."

The Gamecocks' chances of moving up in the SEC East are now a lot better. The magnitude of South Carolina's upset wasn't lost on Boyd, who sat near midfield after the game with tears running down his face.

"I'm speechless," Boyd said. "I knew we could do it, but we'd never done it before. We're trying to compete for SEC championships, and this is one step. We've still got a lot to prove, but this is one big step."