"We create these giant Football Monsters when we win. They are voracious and we have to feed them every year!" Barry Switzer's eyes glittered as he described his least-favorite conscience-driven cartoon character. 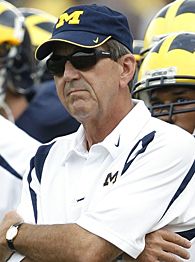 Staying up late to write about Saturday's Michigan-Notre Dame melee reminds me of the level of fatigue most Football Monster coaches feel most of the time. The drain is indescribable and unforgettable. Coach Vince Lombardi was correct when he said "fatigue makes cowards of us all."

When I use the term Football Monsters I don't mean Dick Butkus or Joe Greene. I'm talking about the universities at which football is more important than religion, food or water. I mean the high-profile football programs that expect to dominate, to build the biggest stadiums, the biggest weight rooms, the biggest academic support systems -- the biggest everything. I mean the teams that publicize their "donors" in slick publications with even slicker categories of their largesse in terms of exclusive clubs that accrue in direct proportion to the cash "contributed."

Some of them even publicize their select parking places. Why not? Wring out a few more bucks for the "charitable" gifts to be closer to the "prestige" elevator which will take the big "givers" to the president's box.

When Switzer's imagination creates his Football Monster, it is born of those characteristics, along with a few more.