Editor's note: This feature on Georgia play-by-play announcer Larry Munson, who announced his retirement on Monday, was originally published on Sept. 21, 2007.

On the day legendary radio play-by-play announcer Larry Munson finally walked away from the microphone, he would jump in a boat, cast a fishing line in his favorite lake and listen on the radio as his beloved Georgia Bulldogs played football. 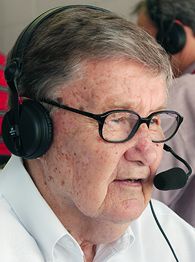 "I've always had that plan because do you realize I've never heard a Georgia game broadcast?" Munson asked a reporter earlier this week.

Generations of Georgia football fans have never listened to a Bulldogs game on the radio without hearing Munson's raspy, excitable voice. Whether Munson was begging for "Old Lady Luck to show her face" or complaining that the "stupid clock isn't moving," he often had fans sitting on the edge of their couches and usually expecting the worst.

But when the No. 22 Bulldogs kick off against No. 16 Alabama on Saturday night at Bryant-Denny Stadium in Tuscaloosa, Ala., Munson won't be there. For generations of fans who have relied on Munson to be their eyes and ears -- and, more importantly, their voice -- there might as well be silence.

"It's going to be an adjustment for all of us," said Loran Smith, radio sideline reporter during Georgia games and executive secretary of the school's Bulldog Club. "It's going to be like coming home one day and your wife has rearranged the furniture. Whether you like it or not, you've got to adjust. It's going to be different because people haven't heard anybody's voice but Larry's for so long."

Because of failing health, Munson announced before the season he would work only Georgia's home games this year. Munson, who turns 85 next week, is undecided whether he'll do any games next year. Munson is plagued by arthritis in both legs and has an ailing back. He recently fell in an Athens restaurant and injured his hip. Munson shuffles his feet to walk and struggles to use a cane, because of pride more than anything else, he says.

Understandably, riding in the team's bus and airplanes to road games and climbing steep stairs to radio booths in opponents' stadiums is too difficult for him now.

So on Saturday, Munson will do what legions of football fans who have relied on him have done for so long. He'll turn on the radio and listen as his replacement paints the scene. Scott Howard, his color commentator the past 14 seasons, will take over play-by-play duties. Former Bulldogs quarterback Eric Zeier will debut as the color analyst.