BATON ROUGE, La. -- LSU's starting quarterback had a gimpy ankle and was throwing a wet football on a rain-soaked field. The Tigers' best receiver was standing on the sideline in his jersey and sweat pants with a painful groin injury.

So with senior quarterback Matt Flynn playing at less-than-full speed and senior receiver Early Doucet not playing at all, the No. 2 Tigers were far from perfect on offense Saturday on a far-from-perfect day at Tiger Stadium.

But with the toughest and fastest defense in the country, the Tigers stayed perfect after four games, beating No. 12 South Carolina 28-16 in front of 92,530 fans, many of whom sat through a downpour before kickoff and during halftime.

"We had to deal with adverse conditions," LSU coach Les Miles said.

So did the Gamecocks, but most of their problems were caused by the Tigers defense rather than by Mother Nature. LSU's vaunted defense gave up an early touchdown, and the Tigers were behind 7-0 in the first quarter, the first time this season they've trailed in a game.

But the Gamecocks did little on offense the rest of the way. South Carolina gained only 89 yards of offense in the first half and finished with 261. The Tigers sacked quarterback Blake Mitchell twice and held him to 70 passing yards. The Gamecocks ran for only 17 yards on 27 attempts.

"Have you guys seen the collisions that are happening out there?" Miles asked reporters after the game. "I'm telling you, there is some contact out there. That's the sign of a good football team."

But for a defense that allowed only one touchdown in its first three games -- a score that came in garbage time during a 48-7 win over then-No. 9 Virginia Tech on Sept. 8 -- allowing 16 points to the Gamecocks was too much.

"We gave up a few yards, and I'd rather them not move the ball at all," said Tigers defensive end Kirston Pittman. "But this is the SEC, and there's good competition. When you're at LSU, everyone expects you to win every game. They expect you to not let anyone score. When you're a great team, people expect great things from you."

And the Tigers expect great things from themselves. Miles knows his defense will be there each Saturday. He said he "likes the direction of the offense" under new coordinator Gary Crowton, the former BYU coach who replaced Jimbo Fisher.

But with Flynn still hobbled by a sprained ankle, which caused him to miss last week's 44-0 victory over Middle Tennessee, and Doucet still not on the field, the Tigers aren't firing on all cylinders yet. 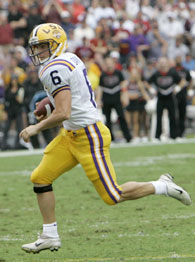 So Miles and Crowton have found other ways for the Tigers to move the ball and score. They hid 5-foot-5 receiver Trindon Holliday behind the line of scrimmage on one play. He's so short defenders have a hard time seeing him.

Holliday proved to be a spark for the Tigers in the first half. LSU trailed 7-0 late in the first quarter when Holliday came into the game. On first down at the Carolina 44, Holliday took a handoff and ran 11 yards for a first down. On the next play, he took another handoff and burst 33 yards for a touchdown, tying the score 7-7.

After the Tigers went ahead 14-7 on Flynn's 1-yard touchdown pass to tight end Richard Dickson with 12:13 to play in the second quarter, they got the football again late in the half after safety Danny McCray intercepted Mitchell's pass at the South Carolina 32.

After picking up a quick first down, though, the LSU drive seemed to stall. On third-and-8 at the Carolina 19, the Tigers called a running play. Many LSU fans booed Crowton's conservative play call. They had no idea what was coming next.

Junior Colt David, who had missed a 42-yard field goal earlier in the quarter, lined up for a 32-yard attempt. Flynn took the snap, but then David ran right. With Gamecocks defensive backs Carlos Thomas and Emanuel Cook rushing him, Flynn flipped the football over his head to David. The kicker ran around the right end for a 15-yard touchdown, and his point-after kick made it 21-7 with 1:10 to play in the half.

"I was looking to see if the guys missed," David said. "I looked to see if our guys picked up their blocks and made their cuts. Then I just tried to get to the corner of the end zone. I was a little surprised. I thought I'd have to beat at least one person, but it worked out beautifully."

Miles said the Tigers worked on the play in practice this week.

"He's very fast," Miles said of his kicker. "He's an old soccer guy and we wondered if he could catch balls and he certainly can."

South Carolina coach Steve Spurrier, who lost for only the second time in 13 games against LSU, said the fake field goal "worked perfectly."

"Obviously, when they work, it's a good call," Spurrier said.

When they don't work, coaches tend to get second-guessed. That's exactly what happened to Spurrier early in the second half. With the rain falling and South Carolina's chances of winning diminishing, he went for a first down on fourth-and-1 at the Gamecocks 30.

Senior tailback Cory Boyd was stuffed for no gain. LSU took over at the USC 30 and scored a touchdown five plays later to go ahead 28-7.

Spurrier had shown a lot of patience in his team's first three games this season, relying on his running game and defense to keep games close. It was the recipe he used to upset then-No. 11 Georgia 16-12 on Sept. 8.

But Spurrier realized he didn't have enough talent to make it work against the Tigers on the road.

Mitchell was benched in the third quarter and replaced by redshirt freshman Chris Smelley. Smelley led the Gamecocks to a field goal and a touchdown in the fourth quarter, after the game was already out of hand. Spurrier said Smelley would start in next week's game against Mississippi State.

"We're not anxious to play LSU again, let's put it that way," Spurrier said. "I think we match up better with Mississippi State, Kentucky, Vanderbilt -- and that's where we are. We're not at that level right now. But a few breaks here and there, we could have pulled an upset. But we're not smart enough -- or good enough."

The Tigers are good enough to run right through the SEC this season. Florida will come to Baton Rouge on Oct. 6, and the defending national champion's inexperience showed in a closer-than-expected 30-24 win at Ole Miss on Saturday. The Gators still figure to be the Tigers' stiffest test, though, after Florida beat Tennessee by 39 points last week.

Anything short of reaching the BCS National Championship Game in the Louisiana Superdome in New Orleans would be a disappointment now.