With the upstart USF Bulls taking the national spotlight this weekend, this week's list is about the biggest developments over the past decade. 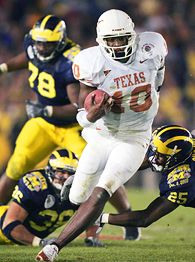 1. The spread of the spread

Purdue's Joe Tiller was one of the first to overhaul a major program with this style offense. Credit West Virginia's Rich Rodriguez for spicing it up with the running game to really get defenses off balance. Vince Young even carried Texas to a national title with his skills running the zone read from the spread.

It doesn't always get the best matchup but the matchup system is still better than the old tie-in format. Of course, no matter how much tweaking goes on each year it'll always have its flaws.

He might not have been USC's first choice or even its third choice, but the former NFL coach returned to the college game and has breathed so much new life into a proud program it has become the "cool" school for recruits all across the country and the measuring stick for every other NCAA program. Carroll's perpetually upbeat, up-tempo persona is what every other coach is trying to mirror. His crafting of the NFL's Cover 2 to the college game (there is a big variance due to the wider hashmarks) is another trademark that has become widely parroted.

Like the BCS, there has been a lot of tweaking and it still seems to have more room for improvement, but it's much better than the old way, although you'll still hear plenty of coaches who'll argue that it's led to more bad officiating because now the zebras are a bit more passive in their thought process.

Everyone's an expert or can be with access to a computer. Charting and tracking prospects has become an addiction for some just like fantasy sports became a decade earlier. The recruiting follies though are so intense that every college coach in the country is logging in or at least has a staffer logging in to find out the "buzz" from the online crowd. It's gotten so crazy you could even write a book about it.

Each of the Florida traditional powers has had its downturns and the fertile talent base has spawned a bunch of promising new in-state programs. USF has already arrived as a top-25 program. UCF made a nice statement in its new home opener against Texas and even FAU had its biggest win two weeks ago by knocking off Minnesota.

7. Boom of the mid-majors

Most thought the BCS would squeeze the little guy out of the national scene. But thanks to scholarship reductions, widespread national TV coverage and some innovative coaching programs such as Utah and Boise State, the little guy has gotten everyone's attention.

The Irish are horrible and have never started this badly. They've also never had such a coaching whirlwind through South Bend as they have had in the past decade.

The NCAA's academic hammer is forcing college coaches to factor character and academics into their recruiting process more than ever before. The reason? If you roll the dice on a shaky kid who doesn't stay on top of his academics or is a bad locker room guy, he'll flunk out and if you have enough washout guys your program will lose scholarships.

The awakening of the Scarlet Knights has been stunning. Most had written Greg Schiano off as a flop but his administration was patient and he rewarded it and the Rutgers fan base with an amazing turnaround. It also didn't hurt that former East Coast power Syracuse went into the toilet around the same time and allowed RU to clean up on the local recruits. Things are going so well for Schiano these days, he's even beating Ohio State and Florida for players.