EUGENE, Ore. -- Two weeks before the start of Oregon's preseason camp in August, everyone wanted to know: Was senior quarterback Dennis Dixon coming back to school? 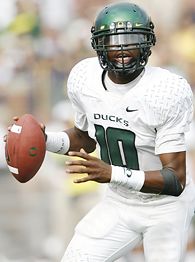 Dixon, whose once-promising football career had been derailed by interceptions and poor decisions last season, spent much of the summer playing baseball in the Atlanta Braves' minor league system. Surprisingly, the Braves selected Dixon in the fifth round of June's amateur draft even though he hadn't played baseball since high school.

After Dixon was promoted from the club's rookie team in Orlando to its Class A team in Danville, Va., there was speculation in Eugene that the Ducks' quarterback wasn't coming back.
"The other coaches were asking me, 'Is he coming back?'" said offensive coordinator Chip Kelly. "I told them, 'He said he's coming back and I take him at his word.'"

Dixon kept his word and came back to Oregon a week before preseason camp began in August. Given Dixon's performance so far, it was as if he never left. Four games into the season, Dixon has been better than ever for the No. 11-ranked Ducks as they prepare to play No. 6 California at Autzen Stadium on Saturday (ABC, 3:30 ET).

Dixon ranks fourth nationally in pass efficiency, completing 68.8 percent of his passes for 932 yards with 11 touchdowns and no interceptions in 96 pass attempts. He's run 48 times for 291 yards and four touchdowns.
"It's going great," Dixon said. "I hate to jinx it. I want it to keep going this well."

It hasn't always gone this well for Dixon. He was benched near the end of his junior season, when the Ducks had a four-game losing streak to end the year. After showing great promise at the start of the 2006 season, Dixon finished with 14 interceptions and only 12 touchdowns.
"He's always had repetitive accuracy and a quick release, and he really has been a good deep passer," coach Mike Bellotti said. "But at the end of last year, it was almost like he lost communication with his receivers. It almost seemed like we weren't on the same page."

Dixon's poor finish to the 2006 season was the reason Bellotti wasn't happy about his quarterback spending the summer away from Eugene. Bellotti felt Dixon should have spent the summer throwing with his teammates during voluntary workouts and digesting the nuances of Kelly's new offense.

The Ducks kept much of the spread offense they ran under former coordinator Gary Crowton, who left after the season for LSU, but Kelly changed much of the terminology and added new wrinkles. Bellotti felt Dixon needed to invest more time in football to prepare for his senior season.
"I think he'd be better served, in my situation, reading defenses rather than reading curveballs," Bellotti told ESPN.com this summer.

When he came back to school, I was the first person he came to talk to. He said, 'Coach, I'm totally committed to football.'

Kelly, who had worked as the offensive coordinator at Division I-AA New Hampshire the previous eight seasons, felt a summer vacation was exactly what his embattled quarterback needed.
"I was a firm believer," Kelly said. "I always said it was the best thing for him. I understood Mike's point, but I thought it was a chance for Dennis to see what else was out there. It was an opportunity for him to clear his mind."

And, more importantly, it was an opportunity for Dixon to grow up. For the first time in his life, Dixon was on his own. In the lowest level of minor league baseball, there wasn't a training table or dormitories. He was required to do his own laundry, prepare his meals and manage his time.
"I saw it as a job opportunity," Dixon said. "You come to college to get a job. I had that opportunity coming out of high school [he was drafted by the Cincinnati Reds in the 20th round of the 2003 amateur draft], so I saw it as a second chance. I saw it as an opportunity to get away and see what else was out there."

What Dixon found was a long, tough road. In 28 games with the Gulf Coast Braves and Danville (Va.) Braves, Dixon hit .176 with 13 hits in 74 at-bats. He struggled hitting left-handed pitchers and curveballs.
Dixon said those struggles taught him a valuable lesson.

"It helped me a lot," Dixon said. "Baseball is about repetition. I can translate that to football, too. If you go 0-for-3 in baseball, you're still going to get to the plate again. If you have an 0-for-3 series or throw an interception in football, you're going to get another series. If you stoop or hang your head, your teammates are going to see that. If you keep your head up and stay encouraged, they're going to feed off that."

Ducks receiver Jaison Williams said Dixon is a completely different player this season.
"We used to be the same kind of player," Williams said. "When we'd make a bad play, we just felt like the world was crashing down on us. We'd hang our heads. Now, he comes back to the sideline and you'd never know he had a bad play. It's always about the next play and the next series. Guys on the sideline take heed in that and stay encouraged."

Kelly said he hasn't been surprised by his quarterback's success. Dixon didn't throw an interception in three scrimmages during spring practice. He seemed to have a good grasp of the offense before leaving to play baseball in Florida and the quarterback continued to work on football there.

Dixon said he spent an hour throwing the football and watched film two to three hours each day this summer.
"When he came back to school, I was the first person he came to talk to," Bellotti said. "He said, 'Coach, I'm totally committed to football.' I know he was throwing and watching film, but he wasn't here. He had some things to prove to people because he wasn't here."

But Kelly knew Dixon had put in the work and would return as a much different player than the quarterback who left.
"I saw it when I went down there and when I'd talk to him on the phone," Kelly said. "He'd call me in the middle of the night and say, 'Coach, I'm watching film of the spring game and they're running this coverage. What do you think?' When I talked to him, I got a feeling there was a trust factor between the two of us."

Now the Ducks are trusting Dixon to lead them where he's never led them before.
"At this point, you have to say we still have some things to prove," Bellotti said. "We were 4-0 last year. We're 4-0 now. But this team learned a lot from last year. No matter what, they're going to be ready to compete."