One of the most unpredictable weekends in recent college football history exposed plenty of pretenders.

As a result, a boatload of previous also-rans are suddenly BCS contenders.

California, which hasn't played in the Rose Bowl since 1959, is ranked No. 3. Wisconsin, which nearly lost at UNLV and allowed 31 points to The Citadel, is No. 5. South Florida, which didn't even play football a dozen years ago and was unranked just three weeks ago, is No. 6. Boston College climbed to No. 7 after beating a Division I-AA opponent by 10 points, and Kentucky is suddenly ranked No. 8. The Wildcats haven't won an outright SEC championship since 1950.

A lot of teams are in unfamiliar territory, which suggests the next two months will be even more fickle.

"[The upsets] tell you how hard it is to go unblemished," Gators coach Urban Meyer said. "You watch, it's a marathon, not a sprint."

This year's BSC marathon figures to be more grueling and unpredictable than ever before. Even the top two teams look far from perfect.

LSU trailed Tulane 9-7 in the first half on Saturday, but won 34-9 and jumped USC to No. 1 in the AP poll the next day. The Trojans dropped after an unsightly 27-24 victory at Washington on Saturday night. USC committed a variety of mistakes against the Huskies: 16 penalties, three turnovers, a missed field goal and blocked punt.

"We're complimented by the vote," LSU coach Les Miles said. "But in no way, shape or form do we feel like we are a finished product. It also tells you that the voters didn't get up early in the morning to watch our game. They kind of slept in and got caught up on the score later in the day."

Last week's rash of upsets produced plenty of must-see TV this coming weekend. Survival Saturday includes three key games in the SEC, a pair of separation games in both the Big Ten and Big 12 and surprising contests of consequence in the ACC and Big East.

• Kentucky at South Carolina (Thursday, 7:30 p.m. ET, ESPN)
Before the season, Steve Spurrier told anyone who would listen that his Gamecocks were ready to compete in the SEC East. Who knew South Carolina would have to beat the Wildcats to prove it? Kentucky is the only team in the SEC East with an unbeaten record in conference play. A victory at South Carolina would give the Wildcats two SEC road wins (they already won at Arkansas), before upcoming home games against No. 1 LSU and No. 9 Florida.

• Florida at LSU (Saturday, 8 p.m. ET)
After a stunning 20-17 loss to unranked Auburn on Saturday, the defending national champions are fighting for their lives in the SEC East. Only three times in the 15 seasons since the SEC split into divisional play has the SEC East winner had more than one conference loss. The Gators looked shaky in a 30-24 win at Ole Miss two weeks ago and now they'll play in one of college football's most intimidating environments. Florida beat the Tigers 23-10 in The Swamp last season, a win that helped propel Florida to the BCS National Championship Game.

"The phrase I was taught as a young person is the soul of a man is exposed when you get hit in the face," said Meyer, who has yet to lose consecutive games in three seasons at Florida. "I don't want to overdramatize a loss in football with some of the major issues in life. But the soul of a man isn't exposed when you pick up a crystal ball and put on a championship ring. A lot of people can do that. It's when you have to rebound from some adversity."

• Georgia at Tennessee (Saturday, 3:30 p.m. ET)
The No. 12 Bulldogs have a second chance in the SEC East after losing to South Carolina in their league opener. Tennessee is still alive after a 59-20 loss at Florida on Sept. 15. Georgia has won its last three games at Neyland Stadium; the Vols scored 37 points in the second half to win at Georgia 51-33 last season. Volunteers coach Phillip Fulmer probably needs to win this game to stay off the hot seat.

"It is new ball game in the SEC race right now," Fulmer said. "We need to take advantage of that and do our part."

• Wisconsin at Illinois (Saturday, noon ET, ESPN)
All of the sudden, Ron Zook can't lose. The Illini upset Penn State 27-20, their first win against a ranked opponent since 2001. Illinois hasn't beaten a top-five ranked opponent since a 14-13 win over No. 5 USC on Sept. 4, 1989. After losing 30 of 32 Big Ten games during the previous four seasons, the Illini can improve to 3-0 in the conference with an upset of the Badgers. Wisconsin has looked vulnerable each of its past four games, beating UNLV 20-13, The Citadel 45-31, Iowa 17-13 and Michigan State 37-34.

• Ohio State at Purdue (Saturday, 8 p.m. ET, ABC)
Are the No. 23 Boilermakers for real? We'll find out Saturday night when the No. 4 Buckeyes go to West Lafayette, Ind. Purdue has clobbered five opponents by an average of 25 points per game and has scored at least 33 points in each contest. Boilermakers quarterback Curtis Painter already has thrown for 1,542 yards and 18 touchdowns. But Purdue hasn't faced a defense as menacing as the Buckeyes, who have yet to face a team as explosive as the Boilermakers.

• Nebraska at Missouri (Saturday, 9:15 p.m. ET, ESPN)
The No. 17 Tigers are 4-0 and haven't been tested since a 40-34 win over Illinois in the opener. Quarterback Chase Daniel has thrown for 1,311 yards and 13 touchdowns. Despite playing a soft schedule, Missouri ranks 93rd in the country in total defense, allowing 434.5 yards per game. The Tigers will have to slow down Cornhuskers quarterback Sam Keller and tailback Marlon Lucky to improve to 5-0.

• Kansas at Kansas State (Saturday, noon ET)
Wildcats versus Paper Tigers? Kansas State is coming off a 41-21 stunner at Texas, its first-ever road win at a top-10 ranked opponent. The 4-0 Jayhawks have steamrolled lesser opponents Central Michigan, Southeast Louisiana, Toledo and Florida International. Kansas ranks third in the country in both total offense (552.8 yards per game) and total defense (218.8 yards per game). Kansas has at least 500 yards of offense in every game and has allowed 23 points this season.

• Cincinnati at Rutgers (Saturday, 7 p.m. ET, ESPN2)
With Louisville, Rutgers and West Virginia having already lost, this game suddenly has huge implications. The Bearcats keep winning under first-year coach Brian Kelly, thanks to the country's best turnover margin. The Scarlet Knights are coming off a 34-24 loss to Maryland, but can remain atop the Big East standings with a victory.

• Virginia Tech at Clemson (Saturday, 6 p.m. ET, ESPN)
It will be the first full-game road test for Hokies freshman quarterback Tyrod Taylor, who took over for Sean Glennon during LSU's 48-7 blasting of Virginia Tech on Sept. 8. The Hokies rank 112th in the country in total offense (285.6 yards per game), and tailback Branden Ore has been unable to get on track behind a poor offensive line. Clemson's questionable blocking finally cost the Tigers a win in a 13-3 loss at Georgia Tech on Saturday. Even with tailbacks James Davis and C.J. Spiller, Clemson ranks 63rd in the country in rushing with 150 yards per game.

On (and Off) the Mark

(Off) The Mark
Like most college football coaches, Texas A&M's Dennis Franchione rarely discusses players' injuries with the media. But it was discovered last week that Fran disclosed inside information to a select group of Aggie supporters, who paid him $1,200 per year for a subscription to a newsletter called "VIP Connection." When the San Antonio Express-News discovered the e-mail reports, Texas A&M officials ordered Franchione to stop the questionable practice. No word on whether subscribers will receive a refund for their advance scouting report on the Aggies' game plan before the Miami game.

(Off) the Mark
The Big East. The upstart conference took more hits than Notre Dame quarterback Jimmy Clausen during the first month of the season. Louisville, Rutgers and West Virginia were considered BCS contenders at the start of the season, but each has already lost. The Cardinals lost to Kentucky and Syracuse. West Virginia fell at South Florida on Friday night, and Rutgers was upset at home by Maryland on Saturday. 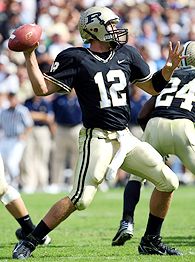 (Off) the Mark
What has happened to Iowa? It wasn't long ago that the Hawkeyes were a Big Ten championship contender and Kirk Ferentz was the hottest name in the coaching profession. But after losing at home to Indiana 38-20 on Saturday, Iowa is 0-2 in Big Ten play and has lost seven consecutive games against conference foes. Worse, Iowa is 15-15 since the start of the 2005 season. The Hoosiers sacked quarterback Jake Christensen nine times. Iowa ranks 92nd in the country in total offense (336 yards per game) and 102nd in scoring offense (19.4 points per game). Iowa's road doesn't get any easier: at Penn State, home against Illinois, at Purdue and home against Michigan State.

"The bottom line is we're not giving ourselves enough chances to win a ball game," Ferentz told the Iowa City Press-Citizen. "We obviously have some areas of concern right now." 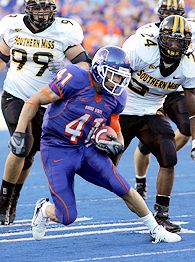