Steve Spurrier's preseason proclamation that South Carolina was ready to compete with Florida, Georgia and Tennessee in the rugged SEC East sounded outrageous at the time. 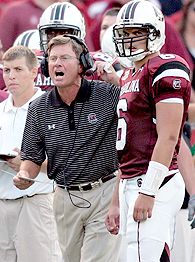 But Spurrier's prediction didn't fall on deaf ears. After all, the Ol' Ball Coach knows the recipe for SEC success. He led the Gators to six outright SEC titles and the 1996 national championship in 12 seasons at his alma mater.

At the time, Spurrier certainly sounded much more believable than Keenan Burton. The Kentucky receiver suggested during the preseason that the Wildcats were not only ready to compete in the SEC East, but also to play in a BCS bowl game. Burton's prognostication was met with laughs, more than anything else.

Who knew both predictions would still have life as we near the midpoint of the college football season?

Kentucky is the only unbeaten team left in the SEC East with a 5-0 record. The Wildcats are ranked No. 8 in The Associated Press poll, their highest ranking since the end of the 1977 season. They've already beaten rival Louisville for the first time in five years and won at defending SEC West champion Arkansas two weeks ago.

One team can extend its improbable championship hopes for another week, at least, when South Carolina hosts Kentucky in a surprisingly important SEC game at Williams-Brice Stadium on Thursday night (ESPN, 7:30 p.m.).

"South Carolina and Kentucky are playing for the lead in the SEC East," Wildcats coach Rich Brooks said. "How many times has that happened?"

Since joining the SEC in 1992, the Gamecocks have never finished better than 5-3 in SEC play. In fact, South Carolina has won only one conference championship (the 1969 ACC title) and four bowl games (the most recent one was last season, a 44-36 victory over Houston in the AutoZone Liberty Bowl) in more than 100 years of football.